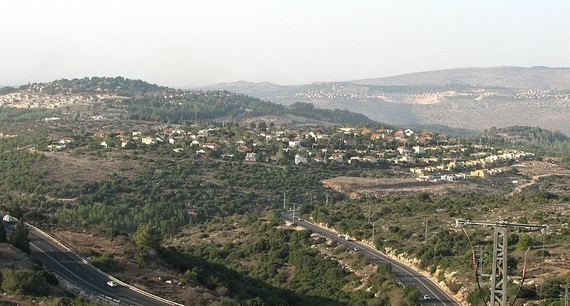 The Israeli town of Rakefet. In 2006, the town's admissions committee rejected the application of a Palestinian couple due to "social unsuitability"; after a six-year legal battle, the couple was allowed to live there after the Supreme Court ruled that the rejection was discriminatory. (Photo adapted from Hanay/Wikimedia Commons)

On September 17th, 2014, in a 5-4 ruling, the Supreme Court of Israel dismissed various petitions filed by human rights groups against the "Admissions Committees Law" enacted by the Knesset in 2011. In text, this law allows decision-making bodies in 434 small communities in the Negev and the Galilee to reject housing applicants based on their "social suitability" and the communities' "social and cultural fabric."

In practice, these committees -- which include a representative from the Jewish Agency or World Zionist Organization -- are now permitted to refuse residency based on any "undesired" identity, such as Palestinian, Sephardic, African, gay, religious, single-parent, non-Zionist or others. Despite petitions condemning the law from all these angles, the five majority judges claimed that it was too soon to determine if the law would indeed have discriminatory effects -- a deliberate tactic to avoid setting a precedent on a case of far-reaching importance.

The purpose of the Admissions Committees Law is no secret in Israel. Fifteen years earlier, on March 8th, 2000, the Supreme Court issued a major ruling that the town of Katzir, built on state land by the Jewish Agency, could not deny the right of the Arab Ka'adan family to live in the town simply on the basis that they were not Jewish. This was the first time that Palestinian citizens of Israel, a fifth of the state's population, successfully challenged the legality of "Jewish-only" communities, many of which, though small, were strategically located to prevent the expansion of Palestinian towns and had bylaws that forbade the leasing of property to non-Jews, though built on confiscated Palestinian lands.

The implications of the Ka'adan ruling alarmed Israel's right-wing political elites. Under the 2009-12 Likud-Beiteinu government, the Knesset introduced new legislation to counter Palestinian citizens' efforts to end the state's discriminatory land and housing policies. Many among the Israeli Jewish public did not question the intentions behind these laws, agreeing that full equality and freedom for Palestinian citizens could threaten the Jewish "character" and demographics of their communities. The authors of the Admissions Committees Law even openly declared that, though deliberately written in neutral language, its main aim was to prevent Arabs from living with Jews.

This goal of segregation is not a new phenomenon in Israel and has in fact been an ongoing state practice since its establishment in 1948. But what makes the Admissions Committees case significant is that the Supreme Court, the supposed vanguard of Israeli democracy, has given legitimacy to this policy. By upholding the law, the Court allowed the Knesset to circumvent its own landmark ruling in the Ka'adan case, overriding one of the few legal decisions that set a precedent for minority rights in Israel and the struggle against state-sanctioned discrimination.

The Admissions Committees Law is only the latest example of the deteriorating status of Israel's Palestinian minority. Already confined to less than five percent of Israel's territory with insufficient space and resources -- the results of decades of state discrimination and negligence -- Palestinian citizens are facing an intensified campaign to minimize their land, housing and development rights, as well as their wider civil, political and social-economic rights. With more legislation being introduced, Palestinian citizens fear that the Supreme Court will be complicit in the right wing's efforts to further entrench Palestinian inequality in order to secure privileged rights for Jewish citizens, under the mantra of defending Israel's identity as a "Jewish state."

It is therefore up to citizens, civil society and international actors to take a principled stance against the Admissions Committees Law and Israel's discrimination against its Palestinian minority. Segregation, especially when engineered and sanctioned by a state, must elicit the same condemnation as other cases have before. It is unacceptable for Israel's Supreme Court to provide legal cover for a practice that, at worst, permits a housing system that disturbingly echoes the premise behind apartheid. Such decisions do not reflect democratic ideals or respect for international law but represent the unjust belief that ethnicity, or any other identity, should determine the extent to which a person can enjoy their human rights.