Imagine living less than forty kilometers away from a big and important city, but never visiting it, and rarely hearing reports about what's going on in it. That is my relationship with Gaza.

I live in the southwest of Israel. Stepping out my front door, I can get in the car, drive 15 minutes, and reach Erez terminal (the only official exit-entry to Gaza). During the last war between Israel and the Hamas (January 2009) a Kassam rocket shot from Gaza exploded within a few hundred meters of my home. From my bedroom I could clearly hear heavy bombings by the Israeli air force. However, since the Israeli media is not allowed to report from Gaza, I receive very limited information about the daily life of my nearest Palestinian neighbors. 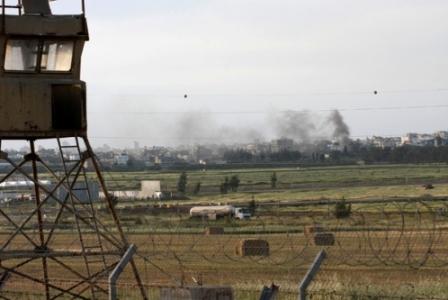 Gaza from a distance (photo by: Roy Edan)

In 2006, IDF soldier Gilad Shalit was captured, during an attack on an outpost within Israel's borders, and has since been held hostage in Gaza. Shortly after that the Israeli government declared Gaza a no-entry zone for all Israelis, including journalists. Basically this means that the flow of information the Israeli public is receiving about life in Gaza is completely dependent upon foreign media. We get minimum information - and understand even less - about the people and their lives, in a city that is critical to the future of the region.

In early 2009, I joined Roy Edan - an Israeli journalist who covers the south of Israel for the country's leading news website Ynet. We spent a day in his "office", covering events alongside the Israel-Gaza border. The idea behind this story - prepared for VJM - was to show what is like for a journalist who cannot enter the most important city in the region he is covering.

During the January 2009 war - known in Israel as Operation "Cast Lead" - the media blockage expanded and foreign journalists were denied entry to Gaza as well. For most of the war the border between Israel and Gaza was completely closed and nobody was allowed to enter.
The inevitable result of this media blockage on Gaza was that the entire world did not have knowledge about what was happening in real time. There were a few local reporters sending out bits and pieces, but not enough to gather a clear understanding of the events.
I experienced the war at home - occasionally running to the shelters - constantly consuming news about the events. The only visuals from Gaza that appeared on news broadcasts during the first two weeks of the war were the videos shot by Israeli combat planes during their bombing runs. There were no on the ground reports from the Gaza streets, or any interviews with locals.
In this next story - prepared for VJM - I investigated how exactly the media was blocked during from the war zones, and how this blockage affected the Israeli public opinion of the war.

Near the end of the war the ban on foreign media was lifted, and journalists from various international news outlets entered Gaza and reported from the city. But for Israeli journalists nothing has changed, and as of today we are still not allowed to enter Gaza. Israeli news outlets continue to provide limited coverage of the biggest Palestinian city. And I - along with the rest of the Israelis - have very little knowledge about the people and society there.