After a half hour, soldiers yelled down, asking what they were doing.

"We're from New York, we paint," they shouted back, and continued spraying. Moments later the gate rolled up to the side and four soldiers came out, with the lead officer shouting, "What are you doing here?"

How and Nosm are at the Palestinian-Isreali Separation Wall, or they were until a few days ago, and no arrests were made. Invited by William Parry from the London based charity called Medical Aid for Palestinians (MAP), the internationally known street artist/graffitist/muralist twins have traveled to about 60 countries with spray cans over the last decade or so, but they say they were not prepared for this experience. 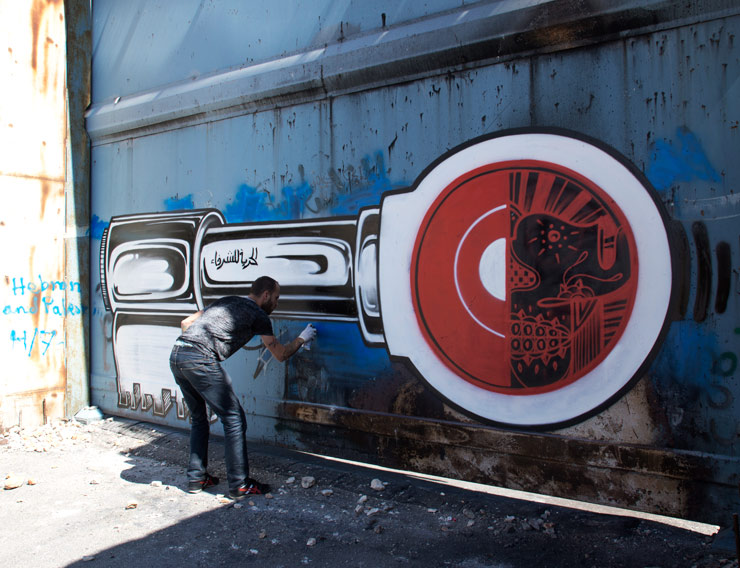 How & Nosm. Mural on a metal gate on the Separation Wall by Rachel's Tomb. Palestinian side. Bethlehem. September, 2013. (photo © William Parry/MAP)

As graffiti writers in their youth, How and Nosm weren't very surprised when their aerosol works were painted over or "buffed" for being in illegal locations. They were, after all, kids being vandals with spray cans and challenging authority and trying to get away with it - but it still was a bummer. 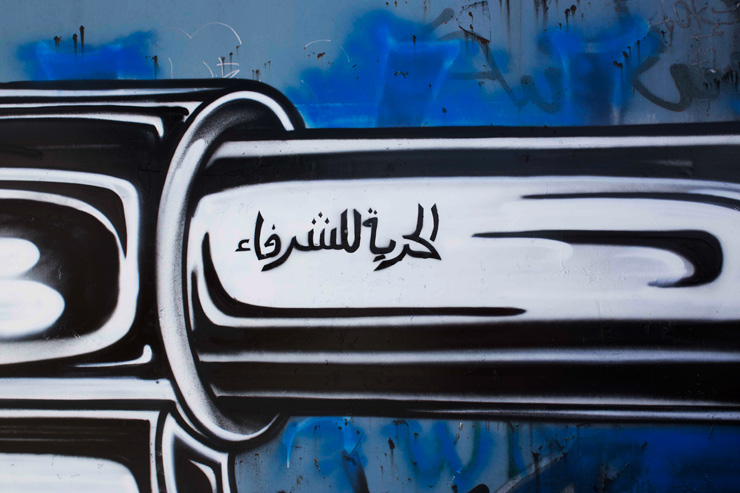 How & Nosm. Detail. The text is translated as "Freedom for the Honorable" - a stencil made by women in an art workshop led by How and Nosm. Bethlehem. September, 2013. (photo © William Parry/MAP)

Getting their painting sprayed-over by Israeli guards was a new experience entirely. Their image of a key, a symbol for Palestinians that is tied to homes they were evicted from, was painted onto a gate by Rachel's Tomb. Loaded with such associations, obviously it was not a benign gesture and it was one so off-putting to the guards that shortly after H&N finished it, according to Parry, soldiers opened the gate and one picked up a spray can "and scribbled over it: 'The occupation will prevail' and made Stars of David symbols."

By that time, How & Nosm were walking coolly up the street.

A typical graffiti writer back home in New York might have taken that as a serious "dis" of their canwork. Instead How says he was happy, "We painted a key and the gate opened!" 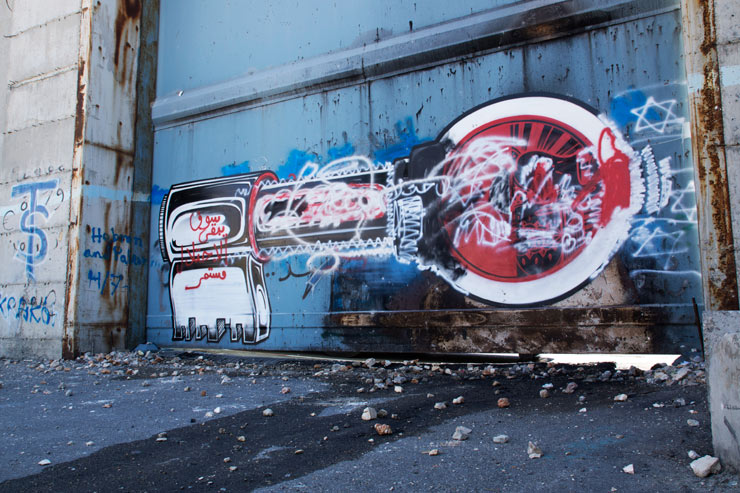 How & Nosm. The defaced mural on a metal gate on the Separation Wall by Rachel's Tomb. Palestinian side. Bethlehem. September, 2013. (photo © William Parry/MAP)

"I first interviewed How & Nosm a year ago in Prague at an exhibition that they were participating in," says the British photojournalist Parry, who published a book called "Against the Wall" in 2010 about a number of Street Artists who have created work there. "We got talking about street artists and Palestine and Israel. How & Nosm were clearly aware that what they read and saw on mainstream media was only one part of the story and when I asked if they would consider doing a trip out to Palestine and Israel with MAP, they said 'sure'.

"One year on," he recalls "after scores of emails to follow up their commitment and logistics, my sigh of relief was audible as I saw them pass through the "Arrivals" sliding doors at the airport. First it was Nosm and about 10 minutes later, How, after he was questioned by the immigration staff about why they'd come to Israel. With their tattoos, curious NYC/German accents and a bag of spray caps and stencils, we were off." 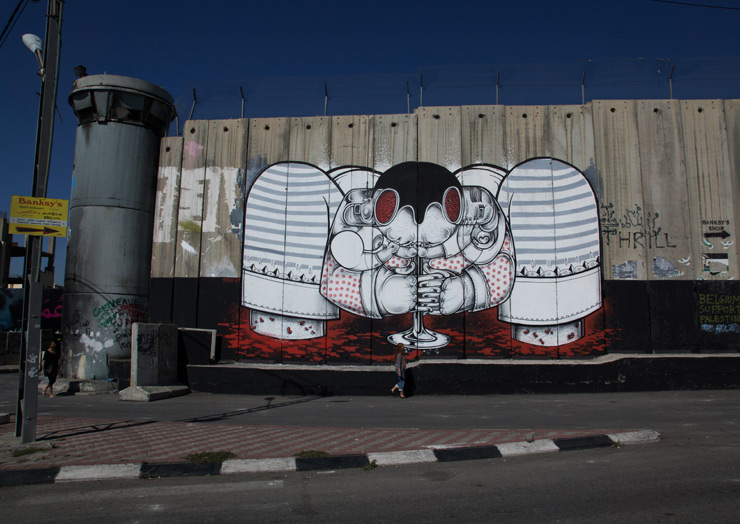 How & Nosm. Main mural in the Palestinian Side of the Separation Wall. Bethlehem, Palestine. September, 2013. (photo © William Parry/MAP)

Not merely on "spraycation" to hit up some walls with their signature style, which they did, the two also made time to work with two populations specifically traumatized by war within the community and to teach them some of the techniques of art-making that the brothers have used in cities like LA, Lisbon, Prague, Paris, Quito, Mexico City, and Brooklyn. 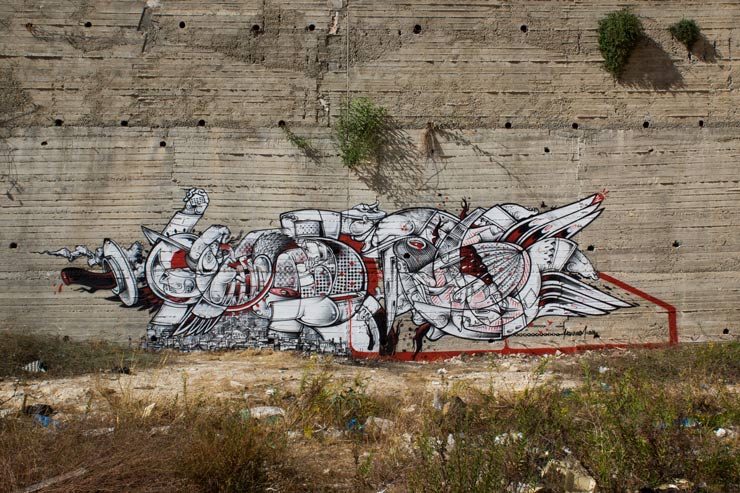 "By the following day," he reports, "as word went round the encampment of the fun they'd had, there was twice the number of people, with several kids joining in too. The women have never had any art classes. One woman, Ameera, said it was the first time she'd been given a pencil to draw with. Despite this, most showed real skill in designing and cutting out stencils to reflect life around them, creating desert-scapes and floral collages with the adept help of the twins. The workshops had a constant air of fun, creativity, chatter and laughter." The brothers worked with the moms and the kids to create stencils, some of which were gathered together to create a collage of the works on the metal walls of one woman's home. 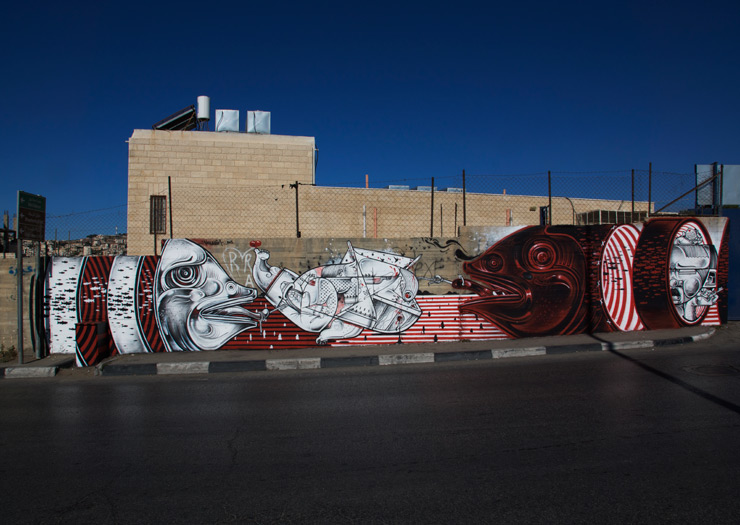 An odd scene perhaps for some to contemplate the brash talking streetwise How and Nosm carefully and gently leading art workshops with small kids when you consider your typical image of the nihilistic rebel graffiti writer, right?

Maybe it is our own perception, or the perception that has been created for us, that graffiti writers and Street Artists are rather one dimensional vandals. Things are not always the way they appear. 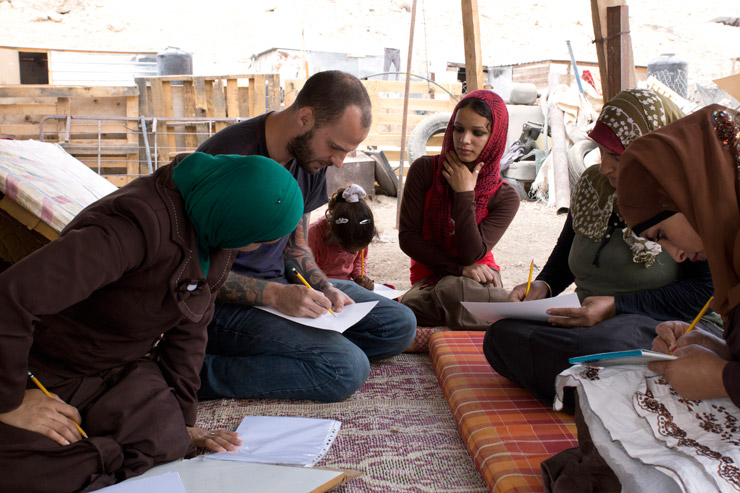 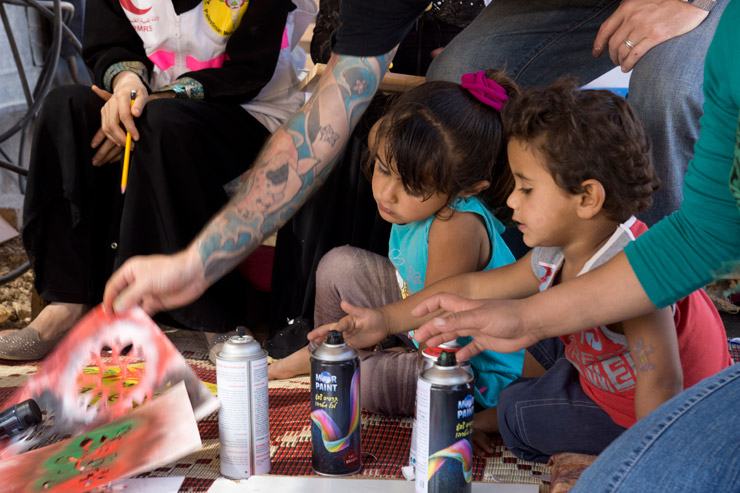 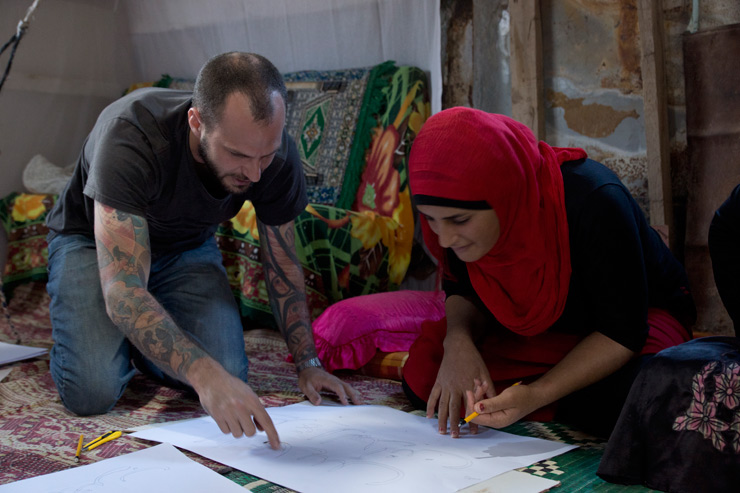 Another surprise was the easy flow of information one can get sometimes these days, even here in the these contested, war-torn lands where reliable information itself can be at a premium to get in and out. The brothers were sort of surprised one day when they went to buy a number of cans of paint in their typical red, black, and white - and they were instantly recognized by the proprietors.

"The young guys running the shop seemed excited to have How & Nosm in town and were asking where they were going, what they were planning, and said they would be very happy to show them round and get them some great walls," says Parry. "How & Nosm remained tight-lipped and said 'We'll call you,' taking the contact information of the guys," he remembers, still marveling at the reach of the art world. "About two hours later, we were in Bethlehem, in the West Bank, looking for the ideal locations for murals and smaller art pieces." 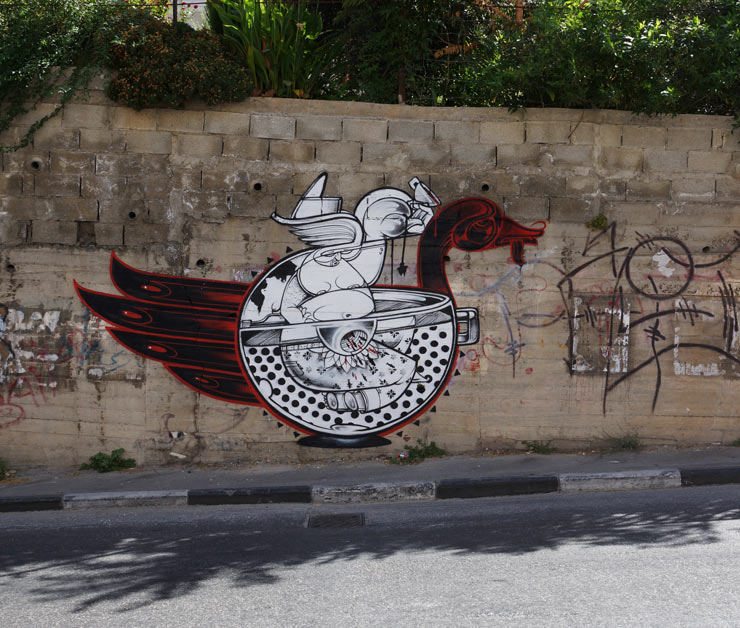 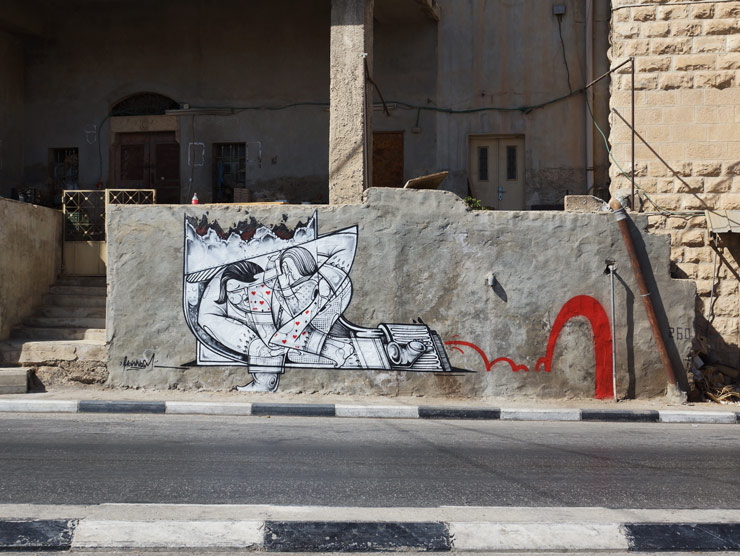 In the Street Art scene we always like to say that context is everything, and clearly here the artists and their hosts feel strongly about the conditions in the occupied areas they witnessed in Palestine and they place sincere blame for the dire situation that envelopes even the smallest children in an atmosphere of fear and trauma. Using art as a vehicle for expression, therapy, and perhaps furtherance of understanding, they say their workshops were instrumental is giving something valuable to the community. 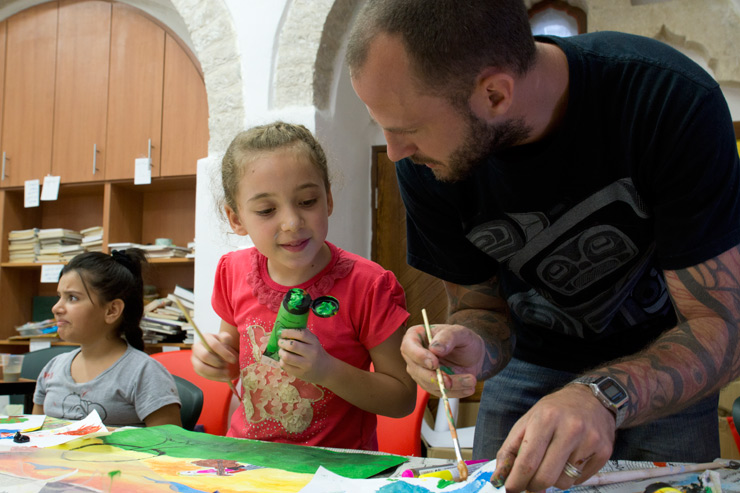 "It was just four days of workshops but the impression that How & Nosm left on the Bedouin women and children who participated in the workshops was enormous," says Parry, as he speaks of the collaborative mural using the stencils the women produced on a structure in the Jordan Valley. He says he "asked what they liked most about the workshops and the women said that it gave them a rare opportunity to express themselves creatively, to discover talents, and to produce beautiful things. 'We also rarely laugh so much,' added Hanan, the joker in the group."

Parry also asked the brothers about their experience. "We agreed to participate because we agree with what MAP is doing and we thought it was going to be a nice collaboration between an organization helping people in need in Palestine and for us to bring attention to the it and for us to see what's going on in Palestine," says Raoul. 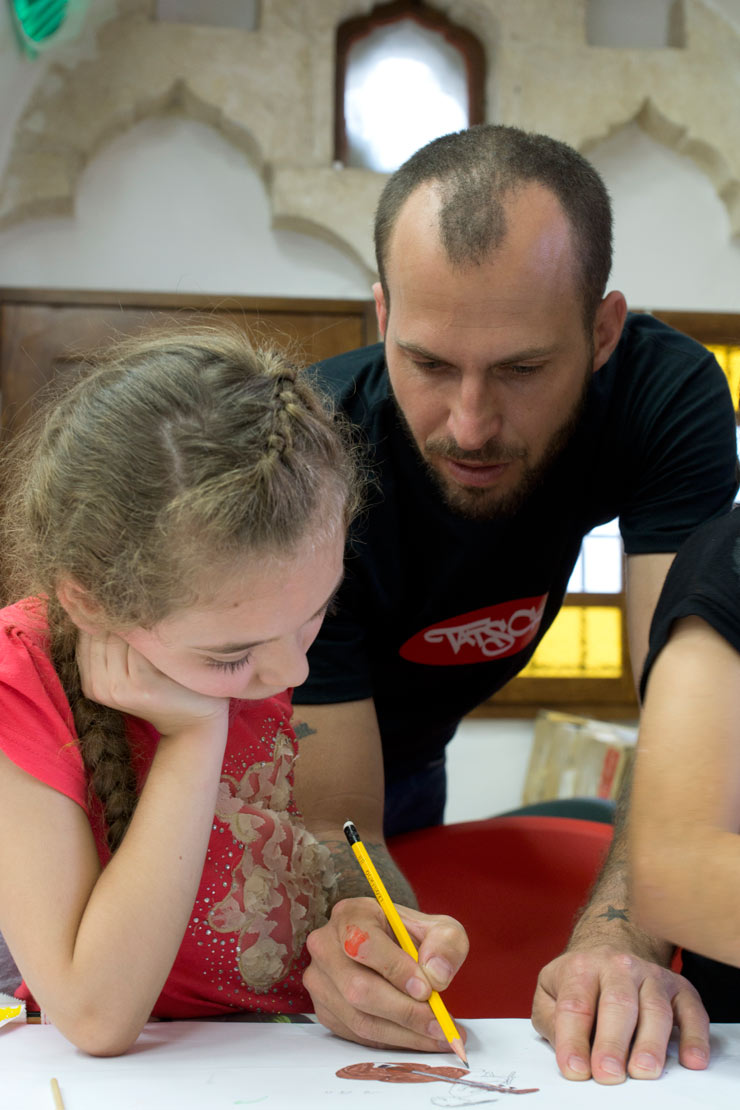 For Davide, his days there produced more of a critique of the Western media that he depends on back home. "It was important for us to see firsthand what is going on in the conflict rather than just reading about it. Even in the independent media you don't get the full picture, it's just not the same experience as coming and seeing the illegal outposts and settlements and other things that exist, and I think we have a better understanding of that thanks to MAP."

For the kids, it was hard to let go, says Parry, and some even cried at the end. "They completed their artwork and mounted them on foam board to create a mural of color and symbolism," Parry says. "As they said goodbye, one child broke down in tears, then like dominoes, several others followed." Many people on the street came to tell the guys how much they liked the work they were putting up on different walls. 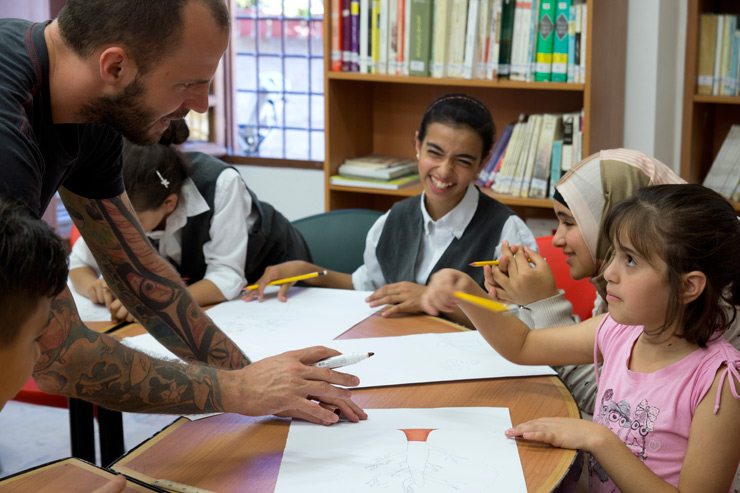 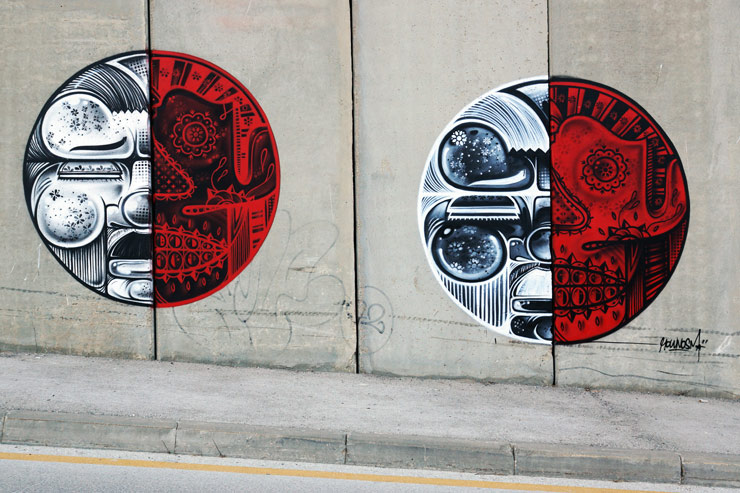 But the brothers say they will think twice as artists if they would recommend others to go paint there. Instead of just hitting a wall, they say they would want people to be sensitive to the impact it may have on the populations who live there. "It's such a difficult situation here politically. We believe that just coming here and tagging, doing pieces, would be inappropriate and selfish," says How. Nosm continues, "We felt an obligation to bring more than just our names so we brought some messages. If you're an artist you should take that into consideration."

Truthfully, in a continually tense war-like environment like this, almost any act, including kindness, can be interpreted as being a political act of some sort. Not all art is necessarily political however and most people understand that it is a form of expression that we can grant latitude to because of its proximity to our own creativity. Who doesn't long to return to the world of discovery we each inhabited at least once or twice in our childhoods?

But it isn't every day that you hear tough-talking graffiti writers speak about considering the affect of your street work on the people in the neighborhood. But this isn't just any wall. And these aren't just any artists. 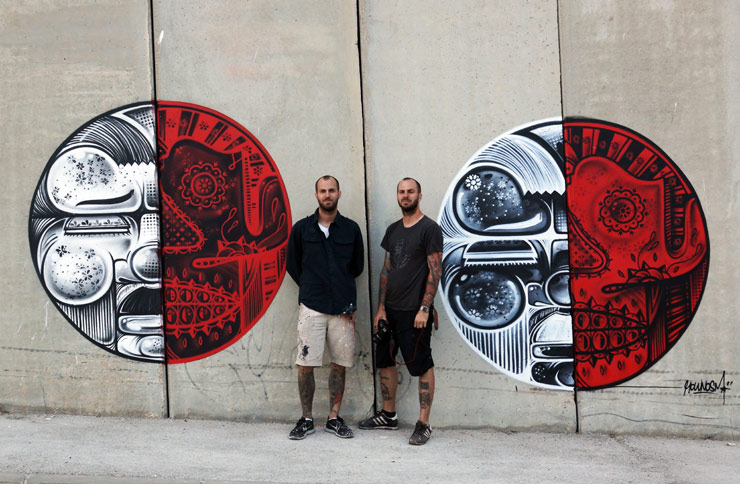