A photo posted to the Instagram account of Mor Ostrovski, a soldier in the Israel Defense Forces (IDF), has drawn outrage and condemnation across the internet, leading to an official rebuke from Israel's military.

The image depicts a young boy sitting near a field, with his back towards the viewer. As the camera peers through what appears to be the scope of a sniper rifle, the boy's head sits centered in a set of crosshairs.

The Guardian reports that Ostrovski is a sniper in the Israeli army. Given the minarets and Arabic architecture in the background of the photo, the child is likely Palestinian.

According to the Israeli newspaper Haaretz, Ostrovski took down the post and deleted his Instagram account after the photo went viral on the internet. Screenshots of the image remain.

The Israeli army has condemned the incident, saying it "doesn't accord with the IDF's spirits and values." An IDF spokesperson added to the Telegraph that "the issue was brought to the attention of the soldier's commanding officers, will be examined and properly handled."

Ostrovski told his commander he did not take the photo himself -- that he'd found elsewhere on the internet and decided to share it. ABC News reports Ostrovski's Instagram account included images of him posing with weapons, one of which is a sniper rifle.

The incident has sparked outrage both in and outside of Israel. Breaking The Silence, a group of Israeli IDF veterans, labeled the photo an "absurd show of force." The group also questioned a system where "a person can aim a gun at a child just to post a 'cool' picture" in order to have that photo shared for popularity on the internet.

In 2012, photos posted by members of the IDF during the November clash with Hamas in Gaza raised eyebrows after many of the images appeared to depict a certain nonchalance regarding the impending conflict.

PHOTO which has drawn global condemnation [via Electronic Intifada]: 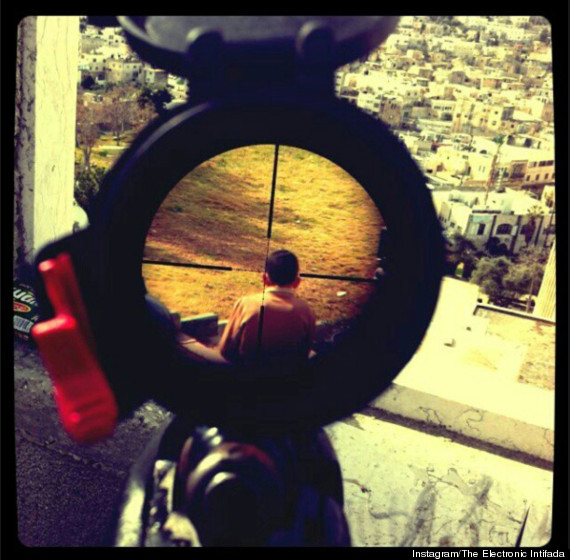