Throughout late February and March, "Israeli Apartheid Week" took place across 200 cities around the world, from the UK and South Africa to Canada and the USA. Anti-Israel events have been held on university campuses and academic institutions, with the official aim, according to the organizers' website, to build Boycott, Divestment and Sanction (BDS) campaigns against Israel while educating about Israel's "apartheid" policies.

Meanwhile in Israel, the March 17th elections for the Jewish state's 20th Knesset brought 13 seats to the Joint Arab List, making the united Arab party the third largest faction in the Israeli parliament.

The new Knesset will have 16 Members of Knesset who are Arab, four more than the previous Knesset. Among the 16 are four Arab parliamentarians who represent Zionist parties including Druze MK Hamad Amar of Avigdor Lieberman's party, Yisrael Beitenu as well as Arab MKs from Likud, Meretz, and Zionist Union.

"We see the new electoral threshold law as a blessing in disguise and hope it will increase the voting percentage among Israeli-Arabs, enabling us to reach 16 seats in the Knesset," Emilie Moatti, the spokeswoman for the Arab Joint List told Tazpit News Agency before the elections.

Israeli Apartheid Week of course does not take note of the above nor of the fact that the head of Israel's Central Elections Committee who oversaw the recent Israeli elections is Justice Salim Joubran, an Arab judge who serves on the Supreme Court of Israel.

Furthermore, on the economic end, more than 100 PA Arab businessmen recently participated in a conference in the Ashdod Port organized by Israel's Civil Administration, which is part of the Coordination of Government Activities at the Territories (COGAT), a subordinate to the Minister of Defense. The head of the Palestinian Authority Importers and Exporters Association, Mohammed Abu-Ein, the acting CEO of the Ashdod port, Itzhak Blumenthal and representatives of USAID and the UN Conference on Trade and Development took part in the conference held in February.

Throughout 2014, more than 1,000 Arabs participated in different agriculture courses across Israel. Israel's Civil Administration also sponsored in cooperation with USAID the planting of strawberry fields maintained by PA workers in the Jenin area.

In addition, Israeli President Reuven Rivlin met with local Arab council heads in February and following the meeting, is launching a new employment cooperation project. The President's Office will work with the Collective Impact Initiative, which works to further the level of employment among Israeli Arab professionals. Within this framework, the President will establish a quarterly business forum of managers who will guide the process of integrating the Arab population into different Israeli companies.

And earlier last week, Palestinian scientist, Dr. Tarek Abu-Hamed of east Jerusalem was appointed deputy chief scientist at the Israeli Ministry of Science, Technology and Space, a senior government position in the body responsible for setting national policy on international scientific collaborations, among other duties.

A little over 20 percent Israel's eight million citizens are Arabs. According to the Israeli Democracy Index, a public opinion survey project conducted by the Israeli Democratic Institute and the Guttman Center for Surveys found last year that 65 percent of Israeli-Arabs are proud to be Israeli. 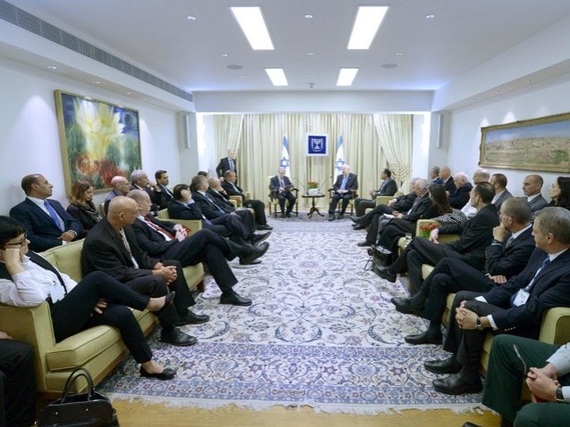