This weekend regional media outlets claimed that the Israeli Air Force carried out two sets of strikes on multiple targets in the Syrian-Lebanese border area during the April 21-April 25 period. The first set of strikes (which also remains the least confirmed) targeted a Hezbollah weapons convoy traveling in the border area on April 22, hitting at least three trucks and killing at least one commander. The second set of strikes occurred during the overnight hours of April 24-25, and are believed to have hit at least three targets in heavily militarized areas of eastern Qalamoun, north of Damascus, which host some of the Assad regime's most loyal and well-equipped units. The units hit include the 155th Scud missile brigade which has bases near the Damascus suburb al-Qutayfa, and the 65th Armored Brigade in areas around the Qalamoun town of Yabroud. In total, claims by Syrian rebels and foreign media outlets suggest that this set of strikes included at least three targets throughout the Qalamoun region, killing a number of Syrian and Hezbollah troops. 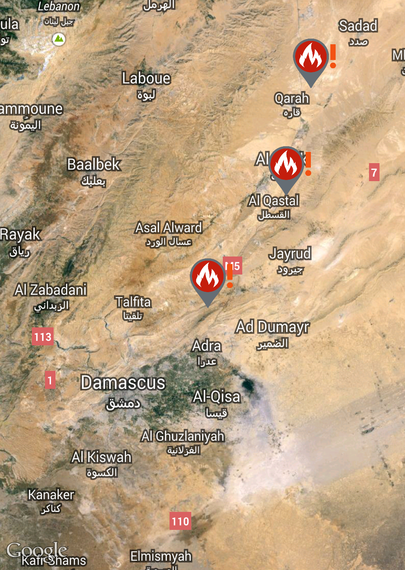 These latest airstrikes constitute (approximately) the eighth such actions attributed to Israel since 2013, and at first glance, underscore a continued Israeli policy of preventing 'game-changing weapons' from reaching Hezbollah's bunkers inside Lebanon. In the past, these strikes have targeted anti-aircraft missiles, advanced Yakhont anti-ship missiles, and long range surface-to-surface missiles, with last night's attacks likely aimed at targeting Scud B or Scud D missiles from being transferred to Hezbollah.

That said, these strikes are the first of their kind to occur after several key local and regional developments, mainly the launching of Saudi-led intervention against Iranian proxies in Yemen, significant losses by the Assad regime in northern and southern Syria, and Hezbollah's January 2015 announcement that the "rules of the game" with Israel had changed. Hezbollah chief Hassan Nasrallah made that announcement after Hezbollah attacked an Israeli military convoy in broad daylight, from Lebanese territory, in which Israel refrained from retaliating. Nasrallah claimed that the attack was an 'eye-for-an-eye' styled response to an Israeli attack on a Hezbollah-Iranian command convoy in the Golan Heights on January 18th. Israel's hesitancy to respond was hailed by the group as a testament to its regional stature, and had left many wondering how Hezbollah would respond to future Israeli attacks against its interests in Syria.

Israel's alleged airstrikes this week pose a major challenge to the regional deterrence of the Iranian axis, particularly as an emboldened Saudi Arabia increasingly hints at intervening in Syria. Unlike past attacks, Hezbollah and the Assad regime have refrained from making public threats or even confirming that the strikes took place. On the one hand, this silence may signal that Nasrallah and Assad seek to refrain from committing to retaliation against Israel and risking an escalation. However, it is more likely that they do seek to retaliate against Israel in some way, shape, or form, reserving the right to claim responsibility at a time which suites them, and reduces the risk of a massive Israeli response.

Israel's likely has a clear understanding of the stakes in this particularly dangerous game. The Israeli military has been anticipating and preparing for a major conflict with Hezbollah, including preparing its home front to sustain more than 1,000 rocket attacks a day, targeting cities nationwide.

Such a conflict would either come as a result of a rapid and unexpected escalation of a localized incident, such as an Israeli airstrike in Syria or a border skirmish, or a calculated aggression by Hezbollah that is endorsed by its Iranian patrons. Such a calculated move would likely aim to suck Israel into the Syrian conflict, should the Assad regime come under attack from the Saudi-led Sunni axis, or lose significant territory in Damascus and the Alawite coastal region to Syrian rebels. While Israel has publicly abstained from taking sides in the Syrian conflict, it has tacitly supported some Syrian rebel groups together with Jordan, and Iran and Hezbollah openly allege Israel of siding with their Sunni rivals.

In the coming weeks and months, it can be assumed that Israel will continue preventing weapons transfers to Hezbollah, even at the risk of a major escalation. For its part, Iran and Hezbollah seem willing to drag Israel into the Syrian conflict or into a new war in Lebanon, should it become clear that their key interests in the region have been compromised.