It only took a few hours for the YouTube video showing an Israeli soldier belly-dancing around Ehsan Al Dababsi, a Palestinian detainee who was bound and blindfolded, to become headline news all around the Middle East last Tuesday morning.

Though the popular video-sharing site shows that this particular file has been uploaded back in 2008, it might have been just unfortunate for this 'swinging soldier' that Israeli television's Channel 10 found it on the internet and decided to air it just before midnight on Monday. (Possibly in light of last August's scandal caused by Eden Abergil, another Israeli soldier who posted intimidating pictures on Facebook with Palestinian detainees as well). 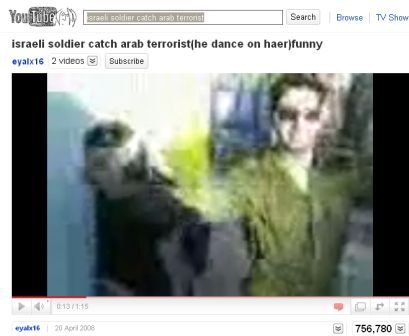 A Screen shot of the Israeli dancing soldier video on Youtube My immediate reaction was that this will be yet another incident where we will be swamped by different Israeli spokespersons repeating over and over again that 'Israel is a democratic state, it has a democratic army' and that this issue 'will be investigated'.

This is because every time some horrific incident occurs, such as targeting a UN school, using illegal weapons during the 2008-09 Gaza war or attacking a Turkish aid flotilla, an Israeli spokesperson appears on European or American news channels to repeat 're-assurances' of Israel being a democratic state, as if this would make viewers in London or New York feel better (or less disgusted) about its army's atrocious acts, or think they must either be justified or in case they weren't, someone will systematically be told-off.

It will be difficult to say this without appearing to be in praise of this rogue and occupying state, however, yes -- Israel is more democratic in many ways than most Middle Eastern countries and I say hats-off to Channel 10 for doing the honorable thing of allowing the video to air while knowing that it will cause much criticism. It is also true that most journalists in the other Middle Eastern countries wouldn't dare do such a thing.

However, all this doesn't give Israel a 'carte blanche' to do as it pleases. On the contrary, being a 'democracy' means it is more accountable than all its neighbors and I think instead of bragging about it all day long, it should actually start behaving like a democratic state, in all aspects rather than being selective about it.

For years, complaints have been ignored -- and perhaps some Israeli spokespeople came out at some point and said that these claims weren't true and that Palestinian ex-convicts and prisoners are 'forced' to say such things.

Looking at this swinging soldier's YouTube video and listening to how Abergil recently said that she saw 'nothing wrong' with the pictures she posted of herself with handcuffed and blindfolded detainees, I can safely say that its about time Israel disciplined its 'democratic' army.

Such acts are both humiliating and intimidating and thanks to social-media, more scandals are being discovered every day and Israeli spin-doctors have less room to maneuver.

However, perhaps the one thing that was equally as preposterous to these two Israeli soldiers' acts is the shameful silence of the international community. Needless to say such behavior is against international treaties and accords. One might argue that Israel has been immune to criticism and defiant of UN resolutions in the past, so why bother and condemn?

Well, the only thing to respond to this is that the US, EU and other countries around the world only need to imagine how they would have reacted if this helpless woman was one of theirs. The same standards and concerns should apply to everyone and Palestinian dignity is no less important than that of anyone else in this world.

Ehsan was arrested after being accused of being part of the Palestinian Islamic Jihad. She has reportedly been sentenced to 22 months in prison. I am not sure if she has actually done anything or not, but dare to question this and an Israeli spokesperson will probably answer you saying "We have a right to defend ourselves". 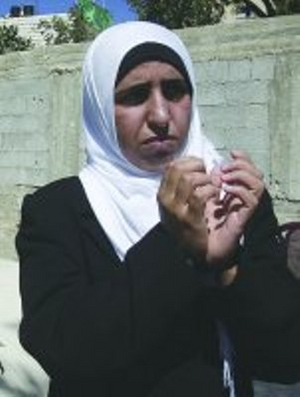 However, what right does Israel have to humiliate a prisoner this way?

Even Prime Minister Benjamin Netanyahu's recent condemnation fails to include a call for action to make sure such behavior never happens again.

So far he has only considered the hip-shaking soldier's actions an "assault on human dignity and brought shame on the Israel Defense Forces and the State of Israel."

Netanyahu also said: "Humiliating prisoners runs contrary to the values of Israel and the Jewish people".

Since Netanyahu has kindly admitted that this was wrong -- then for once we are all in agreement. Now, all that is left is for him to actually do something about it, after all -- if this goes without holding the person in charge accountable and if torture, abuse and humiliation are allowed, then how is the 'democratic' state of Israel different to the 'totalitarian' regimes it often criticizes?

This article was originally published on Friday 8 October 2010 in the UAE based Gulf News.