This week the United States European Command and Israel held joint exercises. A big part of the mission was to test the reliably of Israel's three tiered missile defense shield. The Arrow is set up to stop long range missiles, like the type in Iran's massive ballistic missile arsenal. Magic Wand is a newly operational system that will stop mid-range missiles, like the kind Hezbollah is pointing at Israel from Lebanon and probably Syria as well. Then there's the famous Iron Dome which takes care of more than 95 percent of short term missiles fired by Hamas and its friends in Gaza.

It takes a lot of coordination, technology and smarts to link these systems and to attach them to radar that can now track any incoming projectile from 500 miles away.

That's just one of the many complex accomplishments taken on by members of a very secretive IDF unit called Talpiot. That unit is profiled in a new book by Jason Gewirtz, an executive producer for CNBC. The book, the first about this special unit is called "Israel's Edge: The Story of the IDF's Most Elite Unit - Talpiot." (Gefen, Feb. 2016). It's a terrific book and a must read for Israel fans and military buffs alike. 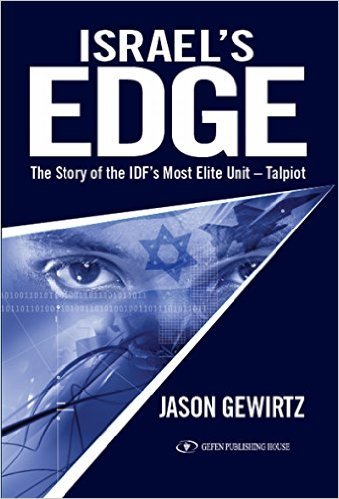 Talpiot was created by two professors who were horrified, like many in Israel, by the Yom Kippur War. In 1973 Israel was attacked from the north by Syria and from the south by Egypt simultaneously. Israel made some grave errors in the years between the 1967 war and the Yom Kippur War in intelligence and in technology. Israel failed to innovate in those inter-war years and it failed to piece together many crucial pieces of intelligence. France, Israel's main weapons supplier at the time suddenly cut Israel off while the Soviets poured new weapon technology into the Arab nations.

After the war was over Professors Felix Dothan and Shaul Yatziv proposed a new program designed to tap into Israel's smartest and most creative young minds. Their idea was to create an army unit where students would learn to fight - but learn to think first.

In 1979 the first Talpiot class began with just 25 students. Cadets for this unit were told when they were drafted, three years was too short of a time for this program. They'd have to enlist for ten years.

In order to make it work, the army partnered with Hebrew University to teach the young cadets physics, mathematics and computer science. They were given three years to complete their degrees. It should be noted that the same amount of coursework takes four years for gifted students not in Talpiot to finish.

While studying members of Talpiot are also sent to train with each and every unit in the IDF from the artillery to tank units, to the infantry, to the navy and air force to learn how each unit does its job.

After a few years, Talpiot commanders started adding new requirements to their list for candidates. They didn't just want the brightest students, they wanted soldiers who could learn together and work together as a team... and young men and women that could lead teams. Finding the right candidates for this unit is now seen as so important it is given top priority by IDF recruiters, even above finding the fighter pilots of the future.

At the end of their first three years the men and women in this unit would then be asked to take their combat and academic training and combine them to help invent and improve all of the weapons in the IDF's arsenal. During their next seven years of service Talpiots become military research and development experts. Missile defense is high on their list of responsibilities. But they also work to develop new tools for cybersecurity. Talpiots have led the way on this new global battlefield. Talpiots have also been very active in space, developing new satellite systems and high altitude, high resolution cameras that can be used to shoot images that then go to Israel's intelligence services to help them see what Israel's enemies are up to.

These soldiers have had an impact on every weapon and communications system used by the IDF and every tool used by Israel's intelligence community.

In many cases, after going into research and development, members of Talpiots hunger for the field and they are encouraged by the Ministry of Defense to do so. The thinking is nobody knows what a warrior needs more than a warrior himself.

Several have gone on to flight school, and then flew F16s in combat. Others have commanded naval ships. Others go on to lead elite ground troops. One member of Talpiot even took his computer science, mathematics and physics courses and designed a shoulder fired missile that can knock out enemy tanks. He then became the leader of an elite ground unit that is capable of infiltrating enemy lines, finding a hiding place and popping out at the exact right minute to use the missile he created to destroy enemy tanks before they even get into a battle. Pretty impressive.

After their ten years in the army, about a third of Talpiot graduates stay in the IDF, usually in research and development roles. A third go into the academic world to teach while the other third go into business. Talpiot graduates have created some of Israel's most impressive companies including CheckPoint Software which keeps the internet as safe as possible for customers and Compugen which helps drug companies find innovative and individual cures for patients battling hundreds of diseases.

Talpiot has been tasked with keeping Israel a generation ahead of a rapidly strengthening and technologically capable Iran making this book extremely timely. The unit also has to help Israel stay ahead of the United States and other large countries with strong militaries as those countries often supply Israel's enemies with advanced weapons and military technology.

This first of its kind book about this once secretive but prolific group truly sheds light on an army unit that has had more on an impact on Israel than any other. The list of accomplishments that Talpiot has under its belt is simply remarkable and the accomplishments of the men and women from this unit after leaving the army is the envy of every country in the world and Jason Gewirtz has been able to capture it all in his book.

There's something in here for history buffs, military watchers, people interested in technology and education, and of course anyone interested in Israel and the Middle East.

It's also important to note that Jason Gewirtz voluntarily allowed the IDF's Censorship Unit to read the book before it was published, and he also had Israel's Ministry of Defense do the same. He is also giving his profits away to help Israel's wounded veterans.