As a general rule, governments like to conduct international negotiations in secret. The recent Joint Comprehensive Plan of Action on Iran's nuclear program, for example, as well as the Trans-Pacific Partnership trade deal, have both been concluded under conditions of utmost secrecy. Critics argue that this secrecy is fundamentally undemocratic and violates the public's right to know what is in these agreements, especially considering they will shape our lives in important ways.

By contrast, a draft of an international agreement to fight climate change, which will be discussed by government ministers from around the world at a pre-COP21 meeting in Paris on Nov. 8, is arguably the most consequential international agreement of this or any other year. And the text they will be negotiating is freely available, right here.

The eventual agreement will set the terms for international cooperation on climate change for the foreseeable future. Considering that "addressing climate change" essentially means "fundamentally transforming the entire global energy system," and considering quite a bit is riding on the speed with which that transformation occurs, this is an agreement worth paying attention to.

That the text is publicly available is the good news; the even better news is that you don't need to be a policy wonk to understand it. The current draft is really just a series of bracketed options for what the final text might look like, and a close reading of some critical passages makes it clear that, with less than a month until the start of negotiations, there remains a wide range of possible agreements contained within the current text. Pick certain options, and you will get an agreement that establishes a strong, ambitious system of international cooperation and accountability; pick others and you will end up with something much weaker that contains far more aspirations and good intentions than concrete obligations.

Governments all over the world are currently preparing for the conference, and if you are fortunate enough to live in a democracy -- and have a passing interest in the fate of humanity -- you are free to let your government know which options you would like to see them support. To get you started, here are four of the most important issues in the agreement, explained:

One of the simplest and most important choices comes in Article 2, which states that the purpose of the agreement is to:

While some countries are willing to accept the 2 degree target, others -- notably small island states for whom even 2 degrees of warming is likely to be an existential threat -- are calling for the more ambitious 1.5 degree target. A recent UN expert dialogue of more than 70 scientists, experts and climate negotiators led to a report that confirmed that limiting warming to 1.5 degrees remains technically possible, and that -- surprise! -- keeping temperature rise as low as possible was a good idea. The question, therefore, is very simple: how much warming are you comfortable with? 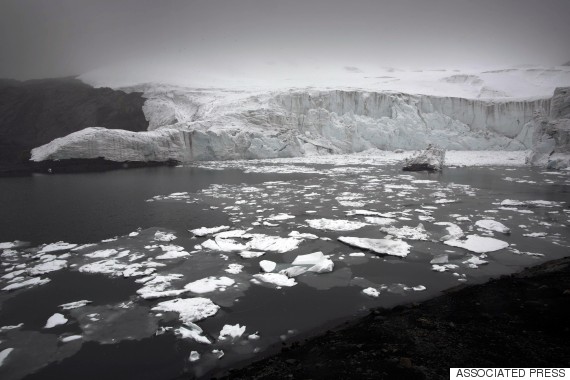 Melting blocks of ice near the Pastoruri glacier in Peru. Peru's glaciers have lost more than one-fifth of their mass in just three decades. (AP Photo/Rodrigo Abd)

2. Will this agreement require anyone to actually do anything?

Draft Article 3.2 addresses countries' individual "mitigation" (i.e., emission reduction) efforts. It's an absolutely critical paragraph -- which means it has a lot of brackets. The first section of option 1 currently reads:

So this provision could end as:

Each Party shall regularly communicate and implement a nationally determined mitigation contribution.

Or, it could say:

Each Party should regularly communicate a nationally determined mitigation commitment.

The first sentence would create an internationally binding climate regime, in which every country is required to create a plan to reduce carbon emissions and then required to implement that plan. The second sentence would give us a world where each party "should" -- hopefully! -- communicate a plan, but be under no firm obligation to implement it.

Which world do you want to live in?

A carbon budget is an estimate of the amount of greenhouse gases that can be released into the atmosphere before we hit 2 or 1.5 degrees of warming. The concept was popularized by Bill McKibben in Rolling Stone and was also used in the IPCC's latest assessment report (the definitive scientific assessment of where we are and where we're going in terms of climate change).

While carbon budgets are calculated estimates rather than definitive numbers, they do provide a very useful way to translate the idea of "limit warming to 1.5 degrees" into a concrete message that the global energy system can understand and respond to -- and budgets are being calculated with ever-increasing rigor and specificity. If we are going to have an agreement that sets out clearly the changes we need to make, therefore, it would be a good idea to include a global carbon budget. Right?

Well, almost. While setting out a precise budget in terms of GHG emissions seems unlikely, the G7 countries, in a communique earlier this year, voiced support for IPCC recommendations of a 40-70 percent reduction in global greenhouse gas emissions below 2010 levels by 2050, and a "decarbonization" of the global economy over the course of this century. While the current draft text contains an option that includes these targets, it also includes a competing option, which simply states:

Parties aim to reach long-term global low-emission transformation, in the context of sustainable development and equitable access to atmospheric space.

That's it -- no percentage reductions, no timetable to achieve them and nothing stronger than a statement that parties "aim to reach" a low-emission transformation over the long term. Despite many countries (and businesses) recognizing the importance of a concrete, long-term emissions goal, it remains possible that the final agreement will only include this vague acknowledgement that reducing emissions, by some indeterminate amount at some indeterminate point in the future would be a nice idea. 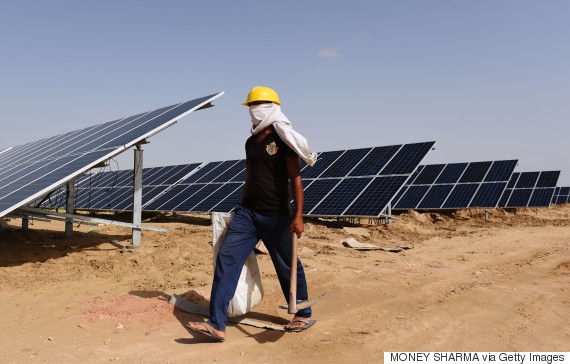 An Indian engineer in Rajasthan, installing a sea of solar panels in the desert as part of the government's clean energy push. (MONEY SHARMA/AFP/Getty Images)

4. Are we seriously not going to update our emissions targets again until 2025?

The agreement adopted in Paris will not take effect until 2020, and many countries' current plans contain targets they won't need to achieve until 2030. Now, the consequences of climate change appear to be continuously getting worse faster than anyone expected, and the cost of renewable energy alternatives like wind and solar are continuously getting cheaper, faster. So it might be useful to get everyone back to the table before 2020 to consider the adequacy of targets countries have set and possibly to update them. Paragraph 18 of the draft agreement has two options that reflect this:

Option 1: [Decides][Invites the President of the COP] to convene a facilitative dialogue among Parties to take stock of the collective efforts of Parties in [2018][2019] in relation to progress towards the long-term goal referred to in Article 3, paragraph 1 of the Agreement, and in order to inform the preparation of intended nationally determined commitments pursuant to Article 3, paragraph 6, of the Agreement;]

Option 2: No such facilitative dialogue prior to 2020.

Options don't get much clearer than this! Whether or not large international "dialogues" are an effective way of addressing something like climate change, the political attention on the Paris meeting this year has seen more than 150 countries, which account for more than 85 percent of global emissions, submit national plans to combat global warming -- an unprecedented level of international buy-in. The targets are, by general agreement, not strong enough, and an international dialogue in 2018 or 2019 would provide an excellent opportunity to strengthen them.

So is it a good idea to include a provision in the upcoming agreement that ensures such a dialogue be scheduled for a few years from now?

Governments prefer secrecy -- true enough, but one should add that indifference, distraction and cynicism can do the same job just as well. But if ever there was a moment that cried out for a comprehensive, informed, global conversation -- across borders, platforms and vernaculars -- then surely, this is it. Every word, number and comma of this agreement will be fought over in the next two months, and every word, number and comma will matter.

Want to help save the world? Some reading may be required.