Istanbul, city of fables, the bridge between West and East, is celebrating its status as a 2010 European Capital of Culture. A wealth of activities and events entice the visitor.

But I want to write now as a longtime frequenter of this city, where we have a little place looking out on the Bosphorus strait that divides Istanbul between continents.

I want to sing here, briefly but heartfelt, of one of Istanbul's eternal glories, regardless of the year: this Bosphorus.

Best Spent Dollar in the World?

It costs a buck, more or less, to ride a ferry across. Same for riding north up along the strait, with Europe and Asia on either hand.

I contend this is about the best value for a dollar in the world. Frankly, if you did much of your visit just shuttling back and forth or up and down, for watery hours on end, sipping small glasses of tea and munching a sesame-seeded bread ring (called simit) as the gulls pulse alongside and the age-old vistas unfurl -- and the boat traffic goes by, ferries, tankers, tiny fishing rowboats, and the cries of the muezzins carry from the shores -- you'd count yourself well dazzled.

The strait runs some 19 snaking miles, from the Black Sea at the north to the tip of old Constantinople's cape on the south, where, overlooked by Topkapi Palace, it joins the Sea of Marmara. (Continuing southward, the Sea of Marmara narrows into the Dardanelles Straits, which Byron famously swam, before emerging into the Aegean.)

The meeting point of Bosphorus and Marmara is also where the river-like estuary called Golden Horn joins the party, flowing in from a few miles back in Europe and dividing just the European shores between old Constantinople (the part with grand monuments is called Sultanhamet) and the newer European area, where the foreigners stayed, formerly known as Pera, now called Beyoglu. The new modern Istanbul of skyscrapers and shopping malls rises going north.

At the Bosphorus mouth of the Golden Horn, where beloved Galata Bridge crosses the estuary, lie the thronged ferry docks of Eminonu and Karakoy. Here's the Bosphorus ferry boat; recently there was a slight, much brooded-over revision of the longtime classic. 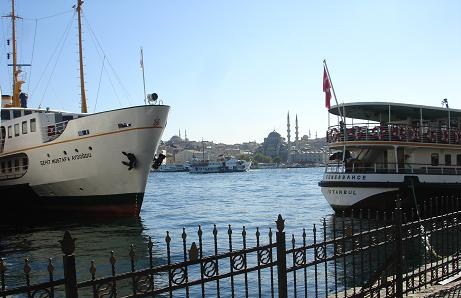 Below, a ferry departs Eminonu. That's Galata bridge just visible at right lower background; looming behind, the great mosque of Suleymaniye, crown of the Istanbul mosques by the great classic architect Sinan. It's 20 minutes across to Asia: best short commute in the world? 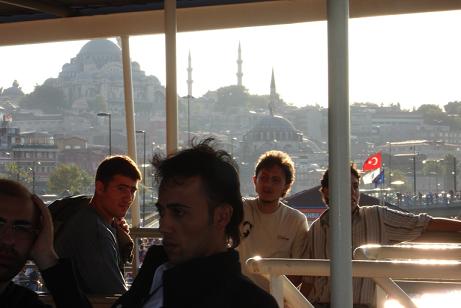 Your ferry ride might bring you across, bending south, to Kadikoy, prized for its food shopping and booksellers. It's home to one of Istanbul's finest restaurants, Ciya.

Looking back from Kadikoy toward Europe: 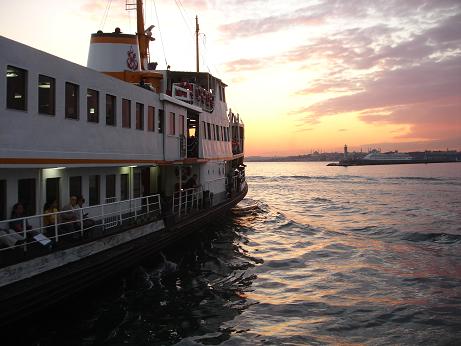 Next north of Kadikoy is Uskudar, a more devout and working-class quarter, its landing a main commuter hub. Above Uskudar unfold villages with the air of sleepier older bygone days. Ferry service calls less often. Here the nouveau riche of Istanbul have their Malibu-like places, and here too are the old wooden waterside summer houses called yali, once mostly neglected, now going for millions of euros. 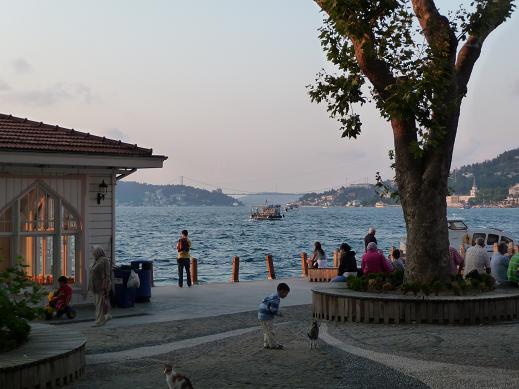 Halfway up on this Asian side, the green hills rises steep. The view below is from Kandilli Borsa, a splendidly sited branch of a famous Istanbul traditional restaurant. You see the freighters and container ships steaming along. The Bosphorus is the narrowest freighter channel in the world; to save costs, the huge ships often do without local pilots, making things nerve-wracking for all concerned. Bosphorus currents are treacherous. However, the strait never floods. 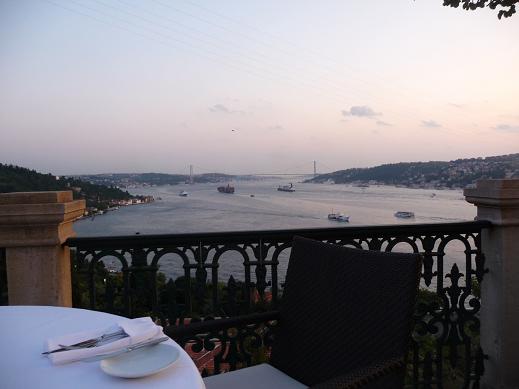 Along the European Shore

The ride up along the European shore can offer you the loveliest longer commute in the world--an hour gliding past shore-side mosques, palaces (such as 19th century Dolmabahce, where the sultans moved after Topkapi), on under the Bosphorus bridges past the tony, charming, and traffic-jammed upstream villages.

Here's the little landmark mosque at Ortakoy, also 19th century, built by the family that designed Dolmabahce. The mosque sits right under the great bridge, an act of infrastructure that forever changed the nature of the city. It helped bring in the flood of immigrants. 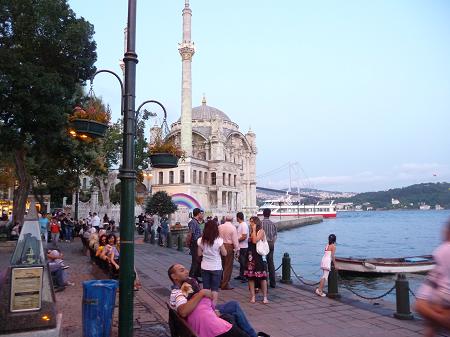 Here's a view from Arnavutkoy, famed for wooden house streets, where a big Greek population used to live. Not for decades and decades, though. It's one of the places where current gets ferocious. 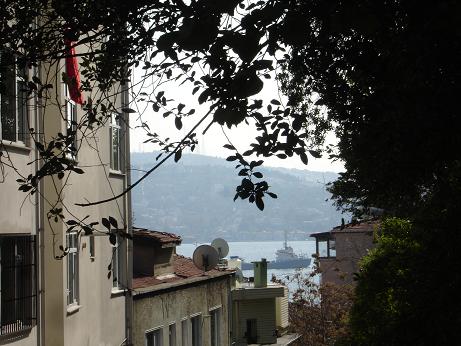 And lovely Bebek village, at twilight:

The 15th century fort of Rumeli Hisari stands under the second big bridge. Constantinople fell to the Ottomans thanks to this fort built with astounding rapidity. 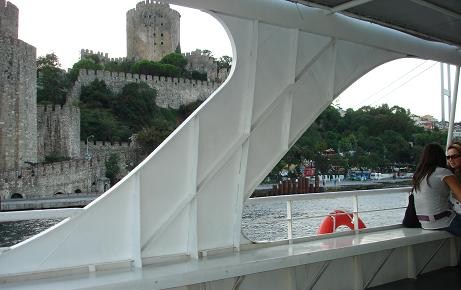 And now we've arrived at this commute's destination: the hillside village of Emirgan. 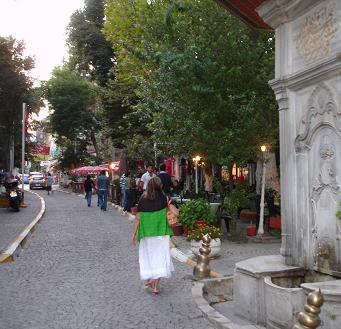 Back where we started: the view from our little 6th floor walk-up in the quarter of Cihangir in Beyoglu, toward Uskudar. There's a subway tunnel almost finished under the Bosphorus, just south of this view. More change in store to this once completely waterborne city, now a sprawling megalopolis. 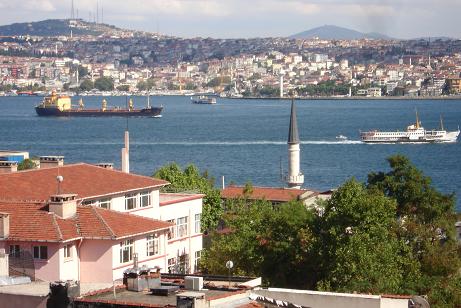 In the current issue of Food&Wine, Mehmet Gurs, Istanbul's most internationally celebrated chef, shows off his beloved waterway.

All this for the visitor, and Capital of Culture trappings too. 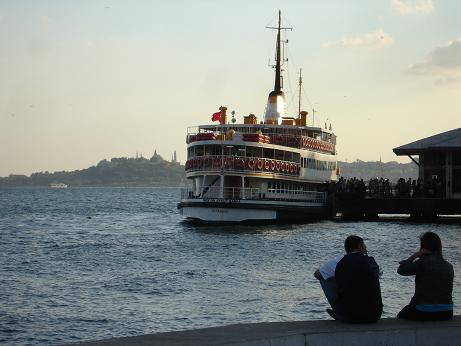