ISTANBUL, Jan 12 (Reuters) - A suicide bomber thought to have crossed recently from Syria killed at least 10 people, most of them German tourists, in Istanbul's historic heart on Tuesday, in an attack Prime Minister Ahmet Davutoglu blamed on Islamic State.

All of those killed in Sultanahmet square, near the Blue Mosque and Hagia Sophia - major tourist sites in the center of one of the world's most visited cities - were foreigners, Davutoglu said. A senior Turkish official said nine were German, while Peru's foreign ministry said a Peruvian man also died.

Deputy Prime Minister Numan Kurtulmus said the bomber was believed to have recently entered Turkey from Syria but was not on Turkey's watch list of suspected militants. He said earlier that the bomber had been identified from body parts at the scene and was thought to be a Syrian born in 1988.

A Turkish government official told The WorldPost that the Ministry of Interior could not yet confirm nor deny reports the bomber was identified as a Saudi man named Nabil Fadli.

Davutoglu said he had spoken by phone with German Chancellor Angela Merkel to offer condolences and vowed Turkey's fight against Islamic State, at home and as part of the U.S.-led coalition, would continue.

"Until we wipe out Daesh, Turkey will continue its fight at home and with coalition forces," he said in comments broadcast live on television, using an Arabic name for Islamic State. He vowed to hunt down and punish those linked to the bomber.

Merkel similarly vowed no respite in the fight against international terrorism, telling a news conference in Berlin: "The terrorists are the enemies of all free people ... of all humanity, be it in Syria, Turkey, France or Germany."

There was no immediate claim of responsibility but Islamist, leftist and Kurdish militants, who are battling Ankara in southeast Turkey, have all carried out attacks in the past.

Several bodies lay on the ground in the square, also known as the Hippodrome of Constantinople, in the immediate aftermath of the blast. It was not densely packed at the time of the explosion, according to a police officer working there, but small groups of tourists had been wandering around.

Norway's foreign ministry said one Norwegian man was injured and was being treated in hospital.

The White House condemned the "heinous attack" and pledged solidarity with NATO ally Turkey against terrorism. U.N. Secretary Ban Ki-moon said he hoped those responsible for "this despicable crime" were swiftly brought to justice.

Turkey, a candidate for accession to the European Union, is part of the U.S.-led coalition against Islamic State fighters who have seized territory in neighboring Syria and Iraq, some of it directly abutting Turkey.

Turkey, a NATO member and candidate for accession to the European Union, is part of the U.S.-led coalition against Islamic State fighters who have seized territory in neighboring Syria and Iraq, some of it directly abutting Turkey.

The dull thud of the blast was heard in districts of Istanbul several kilometers away, residents said. Television footage showed a police car which appeared to have been overturned by the force of the blast.

"We heard a loud sound and I looked at the sky to see if it was raining because I thought it was thunder but the sky was clear," said Kuwaiti tourist Farah Zamani, 24, who was shopping at one of the covered bazaars with her father and sister.

Tourist sites including the Hagia Sophia and nearby Basilica Cistern were closed on the governor's orders, officials said.

"At first we thought it was percussion bomb, it was so loud. They attacked Sultanahmet to grab attention because this is what the world thinks of when it thinks of Turkey," said Kursat Yilmaz, who has operated tours for 25 years from an office by the square.

"We're not surprised this happened here, this has always been a possible target," he said.

Ambulances ferried away the wounded as police cordoned off streets. The sound of the call to prayer rang out from the Blue Mosque as forensic police officers worked at the scene.

"It was unimaginable," the police officer who had been working on the square said, describing an amateur video he had seen of the immediate aftermath, with six or seven bodies lying on the ground and other people seriously wounded.

Just over a year ago, a female suicide bomber blew herself up at a police station for tourists off the same square, killing one officer. That attack was initially claimed by a far-left group, the DHKP-C, but officials later said it had been carried out by a woman with suspected Islamist militant links.

"Ambulances started rushing in and I knew it was a bomb right away because the same thing happened here last year," said Ali Ibrahim Peltek, 40, who operates a kiosk selling snacks and drinks on the square. "This is not good for Turkey but everyone was expecting a terrorist attack."

Turkey has become a target for Islamic State, with two bombings last year blamed on the radical Sunni Muslim group, in the town of Suruc near the Syrian border and in the capital Ankara, the latter killing more than 100 people.

Violence has also escalated in the mainly Kurdish southeast since a two-year ceasefire collapsed in July between the state and the Kurdistan Workers Party (PKK) militant group, which has been fighting for three decades for Kurdish autonomy.

The PKK has however generally avoided attacking civilian targets in urban centers outside the southeast in recent years.

Turkey also sees a threat from the PYD and YPG, Kurdish groups in Syria which are fighting Islamic State with U.S. backing, but which Ankara says have close links to the PKK.

"For us, there is no difference between the PKK, PYD, YPG, DHKP-C ... or whatever their abbreviation may be. One terrorist organization is no different than the other," Erdogan said, vowing that Turkey's military campaign against Kurdish militants in the southeast would continue.

Davutoglu's office imposed a broadcasting ban on the blast, invoking a law which allows for such steps when there is the potential for serious harm to national security or public order.

But Yilmaz, the tour operator, said he had sold a package to a tourist from Colombia just an hour after the blast.

"The reality is the world has grown accustomed to terrorism. It's unfortunate, and I wish it weren't true, but terrorism now happens everywhere," he said.

"The agenda changes quickly in this age. If tourism is affected by this, it will be temporary. These things pass, but the Hagia Sophia and the Sultanahmet mosque are eternal." 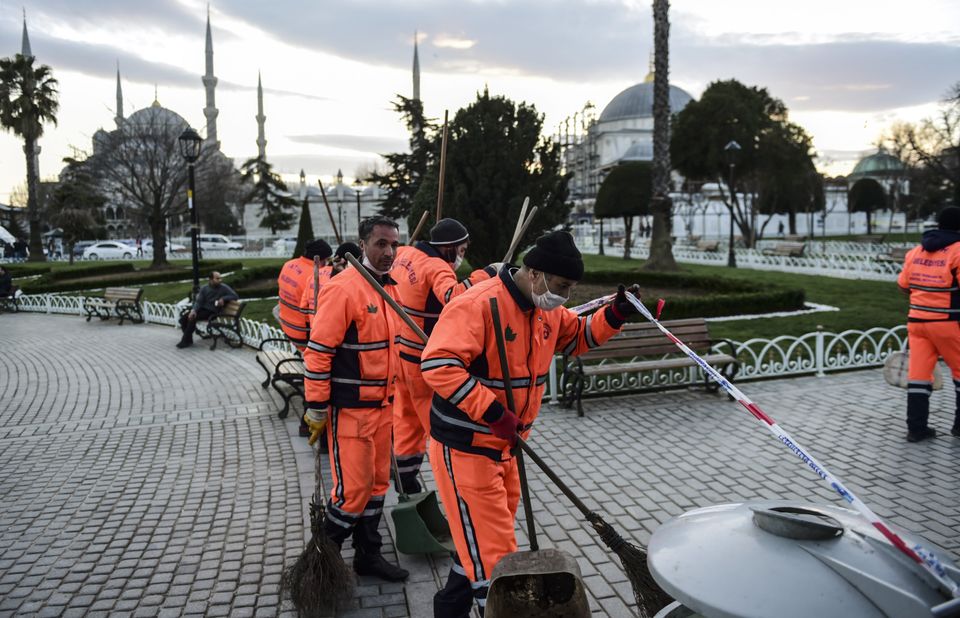