There are Turkish stories, I'm told, that start and end like this: "Maybe it happened, maybe it didn't."

So maybe I was in Istanbul.

I remember rain turning the city's alleys into wild rivers. That must have been real. Why would you make it up? And I remember this: my wife and I saw all the big sights twice. Aya Sofya, the Blue Mosque, Topkapi Palace. We've got the ticket stubs to prove it.

These are relaxing spaces, layered like clouds, and we went back the way you might return to a park. Under the domes of the mosques, there was a sky that didn't drizzle and you could look up at moons and stars stenciled onto the tiles high above. 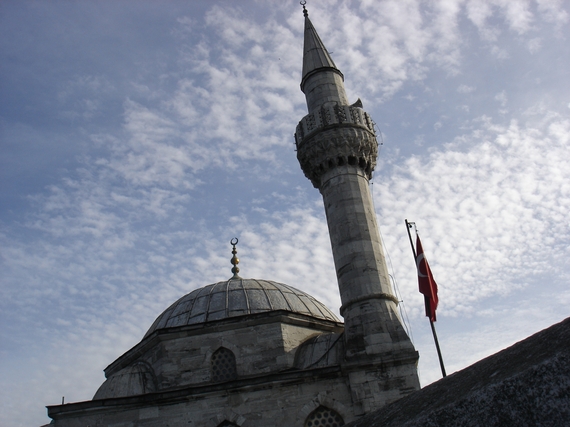 According to my Turkish coffee fortune, told on our first day, the trip was supposed to be a hot one like the cup I held. Hot and dry. "That is right," said our guide, Gonul Gudu, after analyzing my leftover grounds. "You will go to the Grand Bazaar simply for shade!"

Turkish coffee is extra thick. It knows all about you. It is like a liquid spy.

According to its mysterious blobs, I will meet a woman with "a small mouth, small nose, but very big breast." Also I have "a long direct flight" in my future.

As for the predicted hot vacation, no maybes about this. It didn't happen. Istanbul is the world's only city to span two continents, and Kathy and I walked along the edge of each in wool coats and waterproof boots.

Old Istanbul is a triangle with water on two sides and ancient walls on the other, and now there was water from above and some of it soaking rugs laid out on the street and starting to pour into the doorways of stores.

Sometimes the tap would turn off, the city's skyline of domes and minarets would glow for a few hours and the umbrella sellers who had motioned to us from every corner would miraculously disappear.

In their place would come an Ottoman army of eager shoeshine men. Could these have been the same vendors with different equipment, a different product? It's hard to say. It is their sidewalk set-up, not their faces or announcements, that you notice and can't forget.

The bottles of polish. The brushes. The little stand where you put up your foot. All are as ornate as a sultan's. The Istanbul shine kit is like a golden instrument. Even though all it plays is shoes. 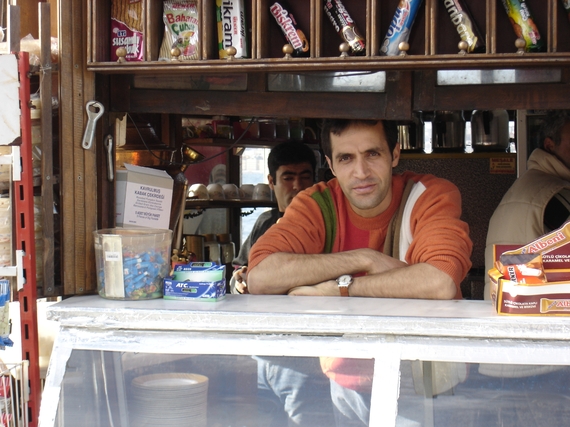 Some tourists may be nervous about visiting the Islamic world. And although 99 percent of Turks describe themselves as Muslim, Turkey has been a secular democracy since the 1920s when Ataturk (a leader who is sometimes referred to as the nation's George Washington) westernized the legal system, restricted Islamic dress and gave women the right to vote.

The people you meet here tend to treat you like a special celebrity guest. Especially in cities, the rush of daily life feels like Paris or New York. Kathy and I fought against only a few major fears: falling into one of a thousand sidewalk holes. Or being run over in the restless streets.

There was also fear of the Hamam. A substantial dread. Trying the traditional Turkish bath made me shake. I do not like baths; I take showers. And this was billed as a bath plus vigorous massage in a room with a large number of strangers.

My wife was extremely pleased with the idea and tugged me along. She picked Cemberlitas Hamam, a historic bathhouse in the Sultanahmet neighborhood which was built by the famous architect, Sinan, in 1584.

You've got to go down a flight of dark stairs to get in. Like at a car wash, you pick the degree of washing you want and pay first. But there's no gentle, brushless option at a hamam. Part of the deal is being scrubbed by a man using a "kese" mitt. This, I was told, is made from the stringy gunk that is scooped out of a squash. Trouble is, it isn't soft. It bites into you like a Scrunge.

After stripping down and being issued a little towel, I was shown to the bathhouse's marble steamroom. It was greenhouse hot and pricks of light peeked in through cut-out circles in the ceiling dome.

Like everyone else, I was laid out on a round, stone slab. I sweated. I expected execution.

Instead I met Ismet, a professional wrestler who discreetly spat on the tiled floor after shaking my hand. "You are the Holland?" he guessed, noting my pale skin and light hair. "No, no," I corrected. "I am the America." On hearing "America" Ismet smiled and rubbed his hands. 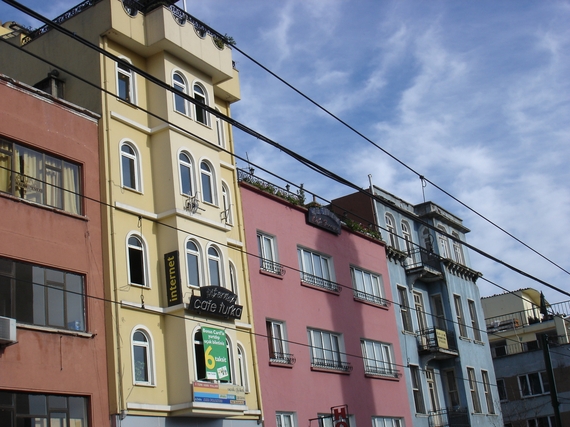 First came Ismet's wooden bucket. Water, and breathtakingly hot. Then from Ismet's tool kit, the Scrunge, from soles of feet on up to ears and nose. Scrolls of skin -- my former skin -- were displayed.

Suddenly a snowstorm blew up. Ismet had gone for some Mr. Bubble and was using its slippery foam to grease me for his favorite part: the massage. A couple of headlocks and full-nelsons later, with Ismet winning the massage on points, my hamam seemed over.

I felt expertly scoured and ready to be cooked. That's when I escaped. I went for my pile of clothes in the little dressing booth, tipped the attendant and ran dripping into the already soggy streets.

Now that I had submitted to Kathy's hamam of choice, it was my turn to pick something traditionally Turkish. Something of Istanbul. But mine.

What I chose sent me strolling around in odd neighborhoods at night. I was feeling clean. Too clean.

The way to cure this, I thought, was to discover the right kind of coffee shop where, along with your fortune-filled hot drink, you get a smoldering pipe. A hookah. Or, as they say here, nargile -- which makes its little stash of tobacco mellow by routing the smoke through a bowl of water and a hollow rubber snake.

Two issues. Kathy refused to come. And, to be honest, I do not smoke.

But thanks to a helpful local, Mehmet Parmaksiz, I found a place called "Osmanli" amidst several nargile cafes in the Amerikan Pazar just off Necatibey Road. It was busy with backgammon and customers puffing out curtain-y wisps and shrouds.

Nargile pipes are a yard high. They are brass and blown glass. You get your choice of flavored tobaccos including apple, raspberry, melon or a fake (like LifeSavers) grape. According to Mehmet, "you are supposed to take the entire evening to enjoy your smoke." I found myself dizzy on drafts of apple tobacco after maybe a quarter of an hour. 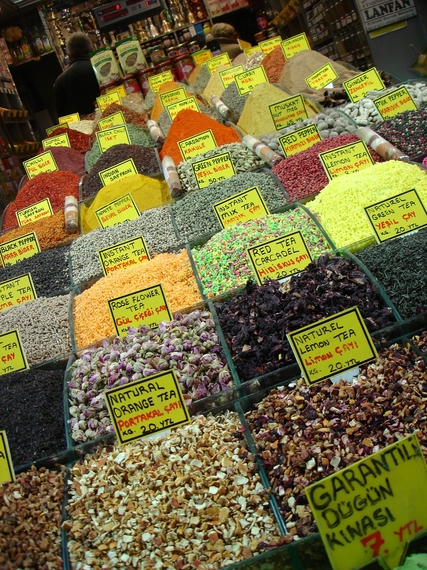 Still, as I said to Kathy later, the taste was rich as a dessert. Complex like spice cake. Hot as the burned-black crust of a pie.

Maybe it was the pipe's sweet magical spell. But our final day dawned bright with a single star and then the Istanbul sun over the roof of the hotel.

A bad day for umbrellas. Good for a shoe shine: the rain was finally over.

I still hadn't met the woman with the small mouth, small nose, big breast. But I knew that my coffee fortune teller was right about something.

It was time now.