ISTANBUL -- Three days after the attack at Istanbul Atatürk Airport that left 45 people dead and hundreds wounded, Turkish Airlines flight TK004 bound for Istanbul is ready to take off from New York's John F. Kennedy International Airport with its 300 plus passengers.

Among them is the Yıldırım family from Gaziantep, a Turkish city on the Syrian border and home to thousands of refugees escaping the war and the self-proclaimed Islamic State.

ISIS, or Daesh in Arabic, has been blamed for several of the attacks that have occurred over the past year in Turkey. Recently, 17 people, including 11 foreigners, have been detained in connection with the latest incident.

Seeing one of the most beautiful cities in the world and its inhabitants go through this tragic attack is heartbreaking.

As Gate 3 is about to close, the Yıldırım family's 31-year-old son is ordered back to the boarding counter to be questioned and have his fingerprints scanned. Although he is given no official explanation, Yıldırım guesses that his name, a common one in Turkey, may have shown up on a passenger blacklist. Security is taken seriously by Turkish Airlines even thousands of miles away from Istanbul. Soon, Yıldırım's callback is understood to be a mistake; he receives an apology from staff for the inconvenience and goes back to his seat. The plane is now ready to take off. Istanbul is my hometown. We are used to constant security checks in our daily lives. There are multiple checkpoints at the entrances to shopping malls -- even at subway stations in this city. And Istanbul's airport itself is known for its tight security. Seeing one of the most beautiful cities in the world and its inhabitants go through this tragic attack is heartbreaking. In his condolences to my country, U.S. Secretary of State John Kerry summed up the problem: "Daesh and others like it know that we have to get it right 24/7, 365. They have to get it right for 10 minutes or one hour."

The terror attacks, and the standoff until recently with Russia over the downing of one of its fighter jets late last year, have so far cost the Turkish tourism industry dearly. In May 2016, tourist arrivals were down by 35 percent, according to Turkey's Ministry of Culture and Tourism. Turkey needs the support of the international community and the patronage of the roughly 42 million visitors that pass through its main airport yearly, more than ever. 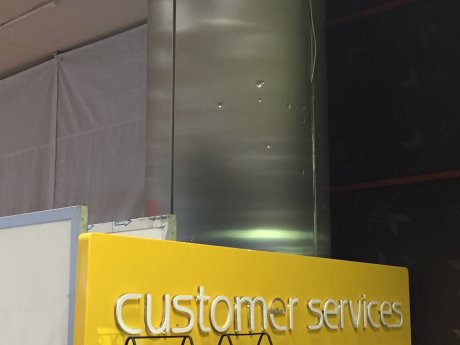 Bullet holes are still visible to travelers passing through the airport days after the attack. (Ilgin Yorulmaz)

It's Eid season here, the celebration that marks the end of Ramadan, a time when domestic and international travel volume often increases. Yet the mood on this New York-Istanbul flight is somber -- but defiant. The staff shows every sign of pride and resilience. Once airborne, some members of the staff tell me of the shock they experienced when their team first heard of the attack last week. They knew colleagues who were slightly wounded. A large group of victims of the bomb were Turkish ground services employees waiting for the service bus to take them home. Still, loss of life could have been worse had the attack happened later, "because the airport gets busier later in the evening," one of the stewards noted.

Arber Gocaj is on the same flight. He runs a restaurant in New Jersey with his family. En route for holidays to his native Albania via Istanbul, he tells me that he initially planned to fly another European airline. When the tickets there were sold out, he chose to fly Turkish Airlines. It is his first time flying with this airline, and he seems very pleased with it. His family, however, is still apprehensive about him flying into Istanbul Atatürk Airport so soon after the bombings. As for the security concerns at the airport, Gocaj is confident that he is safe. "They can't bomb the same place twice," he says.

The terrorist attack also hit close to home for my family. Visibly shaken, my globetrotting husband calculated that he passed through that airport 130 times last year alone. "It could have been me," was all he could say.

My globetrotting husband calculated that he passed through that airport 130 times last year alone. 'It could have been me,' was all he could say.

When we finally land at Atatürk at 5 a.m. on Saturday, the place is quite busy despite the early hour. Travelers emerge from flights from places like Amsterdam, Colombo and Tokyo. Areas affected by the explosions are boarded up. Bullet marks on the columns and shattered glass are a stark reminder of the tragedy that just occurred. Mesut, who works at a hotel information desk across from Simit Sarayı, the bagel shop, tells me that he escaped the bombs by just three minutes. He had left his post and gone out to have a cigarette. "I finished my cigarette and was headed to the car to get some sleep when the first bomb exploded," he says.

Waiting for my connecting flight to Izmir, I find the atmosphere eerily calm. Tebby Khutsoane has just arrived from the U.K. with her family that morning and is waiting to board a flight to Bodrum. Four days ago, she was driving in Oxford when she heard on the radio the news of the explosions. Although they did go ahead with the trip four days later, they decided to cancel the Istanbul leg and chose to transfer to Bodrum. "Some of the members in our group felt nervous to spend time in Istanbul, so we decided to go straight to Bodrum," she tells me.

Twenty-three-year-old student Oğuzhan Yılmaz and his father, Celal Yılmaz, are traveling to Antalya from Istanbul. When the news of the bombings broke, "I immediately thought of my older sister," Oğuzhan says, "because she travels a lot by air." Luckily, his sister had decided to drive from Izmir to Istanbul that day instead of taking the plane. Coming to the airport this morning, his father found it odd that there seemed to be barely any increase in security in the perimeter of the airport after such a serious attack. "There should at least be stronger police visibility to discourage further attacks," he tells me. 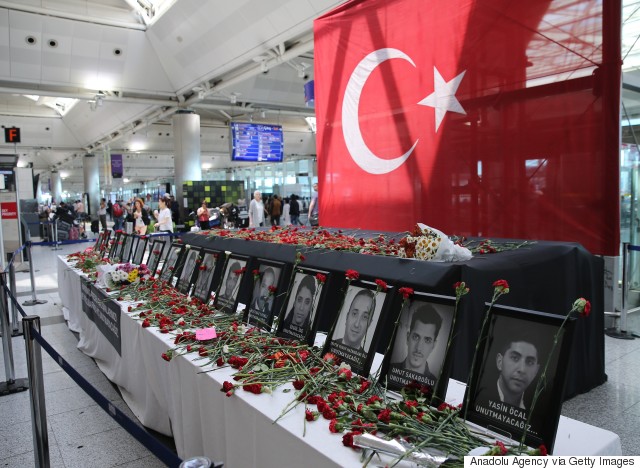 A memorial for victims of the attack is put on display in Ataturk Airport. (Isa Terli/Anadolu Agency Via Getty)
Advertisement

Everywhere -- in the lounge, on the bus to the plane -- passengers talk to each other of close calls and changed plans at the last minute, which probably saved their lives. Some passengers leave the terminal and exit through the international arrivals hall. This is where my family namesake Ali Zülfikar Yorulmaz, a veteran taxi driver, was killed. Yorulmaz had been dropping off a customer, reports said. Fahrettin Can, the head of Airport Taxi Drivers' Association, spoke angrily at the funeral of Mustafa Bıyıklı, another taxi driver killed with Yorulmaz: "We are here. We are not afraid of terror or terrorism. We are here continuing to do our business and we are with our nation and government. ... God damn PKK, God damn ISIS and God damn terrorism," he said defiantly as the imam asked for blessings from the crowd for the deceased. Yorulmaz was one of three drivers who lost their lives in the attack.

Now, it almost seems surreal to imagine hailing a cab outside the arrivals gate like I've done dozens of times before. Luckily today, I don't have to: I transfer at the airport, stay for a few hours inside and continue my journey to Izmir, the third largest city in Turkey on the Aegean coast. As I finally disembark at Izmir after a 12-hour journey, a stewardess smiles at me and says, "İyi Bayramlar!" "Happy Eid!" I hope it is a happy one for me and for my fellow Turks and foreign travelers in and outside of Turkey.