With Christmas coming, isn't it great when a miracle occurs? Judson Birza (aka Fabio on the latest edition of CBS' Survivor Nicaragua) managed to stay under the radar as a good-looking, generally perceived vacuous competitor, who no one really considered a threat until it was too late. And he won!

As I said commenting in another article during the Survivor Nicaragua run, it would be foolish to take this 21-year-old guy for granted. True, there were a lot of goofy things he said around the campfire, but in private confessionals he often revealed lots of common sense. His awareness about how he was viewed by the others and strategy revelations convinced me from the beginning he was the one to watch.

Why? Well, he was very strong in the reward and immunity challenges, helping his teammates escape Jeff Probst's quenching of their torch too early. He was also one of the first winners of individual immunity when the teams were merged.

But it all slid by the notice of the others who considered themselves superior, in particular the sly and crafty Brenda who, with Sash, fancied themselves the puppet masters of the tournament, as did Russell a couple of seasons back.

And indeed they were able to sideswipe a number of their targets, who they believed to be stronger threats, leaving Jud, now known as Fabio, because of his long golden locks, to take a back seat and amiably go along with how they told him to vote. Their success was fleeting though, because, unbeknownst to Brenda, she was betrayed by her "friends" Sash and Chase, and was sent out of the game as the third member to sit in the jury box.

At a certain point as the numbers dwindled down to seven it became clear maybe it was time to get rid of Jud/Fabio, and I feared it would happen. Perhaps it was because he'd shown some brainpower when he missed putting together a complicated puzzle, losing to Sash by only a matter of seconds. 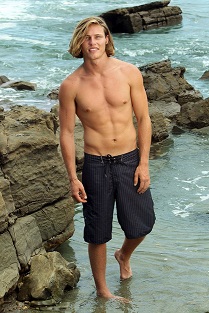 So, they convinced Jud/Fabio that Holly would go, while the conspirators, including Benry, told the audience it would be Jud/Fabio. But Benry had likewise been a force and had come in second to Chase in the reward challenge, so it was a shocked Benry whose torch was snuffed out.

Okay, Jud/Fabio got a pass, but it was clear he would go the next time -- unless he won the immunity challenge, which Jane, Sash, Holly and Chase were determined to block. However, a funny thing happened to their plans as Jud/Fabio pumped up his mental acuity, matching pieces he was only allowed to feel as the competitors were blindfolded. And even though he failed the first time he thought he'd finished, he worked so fast he had a second chance to recoup before the others could beat him.

Sash and Chase, who thought they could lead the "dumb" Jud/Fabio around like a mule, told him the next choice to go would be Dan, but found Jud/Fabio had different ideas. He wanted Jane out, sensing her hard luck personal story might win the jury votes and, though Jane was allied with the "noble" Sash, Chase and Holly, they dutifully voted her out.

But they'd get Jud/Fabio the next time for sure, and this time it looked like it would happen, because the kid, who in their minds was clearly deprived in the smarts department, had in fact failed to answer a critical question in the challenge, and Sash, Holly and Chase were well into putting together a jigsaw puzzle before Jud/Fabio could begin the process. But wouldn't you know, son of a gun, this rube from St. Louis, getting by on his handsome pug, just zipped along, eyes purposefully on the stack in front of him and won immunity again. The others couldn't believe it.

Jud/Fabio tried to save Dan and it looked as if they all agreed to get rid of Holly, but at the tribal council it was Dan who joined the jury, even with Jud/Fabio's vote. Well, in fairness, Dan had previously voted for Jud/Fabio to leave in an earlier episode.

One more immunity challenge and the three would certainly vote Jud/Fabio out. I was hoping for an endurance challenge, but it was a balancing act, wherein coins of different sizes were added to a pile until it fell. First, Holly's heap crashed, then Chase's, and it was between Sash and Jud/Fabio, whose slowly mounting coins seemed precarious on a number of occasions. My heart was beating fast. This would do it. And no way would Chase and Sash get rid of Holly. Jud/Fabio was dead.

But the Gods were with the good guy, as sometimes they are, and it was Sash's pile that fell, and the blond surfer/model was now in the finals.

It was amusing how everyone started sucking up to Jud/Fabio, in particular Sash who pretended to be his friend and lied that he would've gotten rid of Holly had he won immunity. Jud/Fabio, no fool he, saw right through it, but sensed Holly would get more jury votes and the three men voted her off that evening.

At this point, to my mind it was a no-brainer, not just because of my personal feelings, but clearly there'd be new found respect for Jud/Fabio, even by those who'd dismissed him like Brenda and NaOnka (forever to be known as one of the Survivor quitters). During the final tribal council when the three finalists were interrogated, it was Chase and Sash who got a lot of flack for telling lies, and Jud/Fabio appeared clean and likable. Though it did make me wince when Holly wondered whether Jud/Fabio's play was, with his three back-to-back immunity wins, too little too late?

Jud/Fabio was earnest and articulate with his replies. To her query and to the attacks by Sash and Chase that he'd been a pawn and not much of a competitor, he masterfully defended himself. He'd gotten to the final three, hadn't he? And with loads of pressure, knowing he'd be voted out if he didn't win immunity, he did so three times in a row. What more did they need, regarding what makes a champion?

The capper came when Alina, the first to become a jury member, said she wasn't sure she wanted to give a million dollars to a "boy." And Chase tried to pull out the heartstrings by indicating he'd tithe his winnings to cancer research in honor of his dead father. Not missing a beat, Jud/Fabio chimed in he would use his winnings to help his parents.

In the end, it proved quite suspenseful. We knew there were two votes for Jud/Fabio and Chase, the latter of whom got clueless Alina's vote and that of Brenda, even though Chase had double-crossed her. Jud/Fabio got Marty and Dan, but as of now there hasn't been news of how the other five voted.

When Jeff Probst read the results, it was Fabio, Chase, Fabio, Chase, then Chase, Chase, leading me to believe, oh, no that unethical Chase is going to win. However, the next three votes went to Jud/Fabio and the audience roared its approval as it did every time his name was announced, as opposed to a sense of dismay when Chase was mentioned. Sash, the self-proclaimed grand master didn't get a single vote.

All in all an exciting finale and a justified one, referencing Aesop's fable about the tortoise and the hare. What bothers me, though, is that the role of a jury is to examine the evidence, and at least four of them couldn't get past their initial view of Jud/Fabio and look at the realities, that he'd outlasted all but Chase and Sash and had performed remarkably under a huge amount of pressure in the final three immunity challenges. Let's hope that jurors on real criminal and civil cases don't function in that manner.