Editor's Note: I'm not one to make excuses, but I must say that graduate school is the anti-blog. I've been so immersed in my struggles with academic workaholism that I've neglected my duties to you fine, blog-reading folks. As a result of said time quagmire, this post concerns a film that was released months ago. But in the words of funnyman Jim Gaffigan, "I want to talk about it now!" After all, if I can't blog about things that only I care about, why have a blog? I thought this was America!

Let it be known: It Follows is a killer thriller that stays with you. Even as I write these words, more than six weeks after seeing the film, I can't listen to a single note of its soundtrack without shuddering and casting a nervous glance over each shoulder. When this minimalist horror masterwork hits Netflix on July 14, you need to see it.

The film follows (Ha!) a young woman named Jay--played wonderfully by soon-to-be superstar Maika Monroe -- who, after a tryst, finds herself stalked by an otherworldly entity. (The fact that this supernatural aggressor pursues people who have sex reads like an exceedingly clever deconstruction of the horror genre's "death by sex" trope.) As stated in the film's trailer, Jay's pursuer, which can take the form of anyone around her, "doesn't think. It doesn't feel. It doesn't give up. It follows." Is your skin crawling yet? (Hint: yes.) 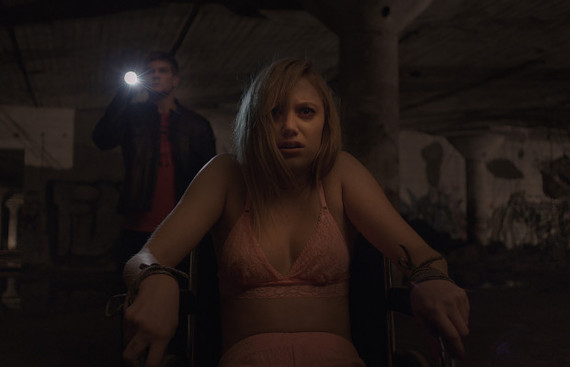 Every frame of this slick, stylish film will unnerve you. Director David Robert Mitchell makes magic out of a modest concept, injecting a nearly unbearable degree of tension into even the film's most serene moments. The opening sequence, which I won't spoil for you here, is especially brilliant in its subtle but certain terror. My eyes were glued to the screen for all 100 minutes of this film, and after tears repeatedly streamed down my cheeks in the theater, I had to remind myself to blink while watching.

Mitchell's camerawork is nothing short of riveting, and he coaxes strong performances out of a young and unknown cast. But the real hero of this film is its soundtrack. Electronic musician and chiptune composer Disasterpeace, whose given name is Richard Vreeland, gives It Follows an auditory edge you could slice a diamond on. His jagged, menacing music sounds retro and futuristic at once, creating an ebb and flow of electric dread that heightens the entire film. In discussing the making of the soundtrack, Vreeland said, "We wanted the music to play an active role, as if it was a character." Mission accomplished.

And speaking of films with incredible soundtracks--if you'll indulge me a leap--It Follows reminds me of another I adore: Drive. The similarities between the two films don't just begin and end with their rich and glittering electronic soundscapes, though. Both are unpredictable, gripping, and gorgeous films that take slender premises and make the absolute most of them. They are paced similarly as well, made up of long, eerie silences that are punctuated by jarring moments of unbridled intensity. You won't walk away from either film with your nerves intact.

I'd be remiss if I didn't note that the spell of It Follows threatens to break -- although I would contend that it only bends -- as the film comes to its off-kilter climax. And the ambiguity of the film's ending has polarized audiences and critics alike. But all you can do, viewer, is watch this indelible, frightening film and draw your own conclusion. Whatever you decide, I can assure you: it follows.