Everyone is always so quick to judge, especially parents. It's so easy these days, with 24-hour news feeds, apps, and the internet to read or hear a story pertaining to the misfortune of a child and assume the parents were negligent in some way. We obliterate them within seconds of hearing a child was hurt - or worse - and without any facts, criticize their parenting skills and ask how they could have let that happen.

Well, of course, I have made rash remarks about other parents before getting the facts because it makes me feel better as a mom. It's easy to say that you would never let your child do something that would put them in danger, only to realize that you have but been lucky enough to have had nothing happen to them. It's actually a typical day for me with my youngest, who, by all other accounts, is the most daring and adventurous little man. He's fearless, which is terrifying for me and makes my days filled with worry, extra precautions, and the anticipation that a trip to the ER is on the verge.

So was the case about three weeks ago. It finally happened. It didn't make national news and my son is fine, but it happened. I took my eyes off of him for too long and my worst nightmare happened. My bold two-year-old let himself in the pool while I went to get his floaties.

He was right there.

When I realized where he had gone, I ran over to where he struggled beneath the surface of the water and I pulled him out. LET ME JUST SAY, the fear on his face while he tried desperately to swim under the water, will haunt me forever. Once he was out, he coughed up all the water he had swallowed. I was with some friends and we did everything we knew to make sure he was comfortable and safe.

Here's the thing, I'm a trained water safety instructor and lifeguard. This shouldn't have happened to me. I've been a mom for nearly a decade and I would never call myself neglectful. I was getting his damn floaties when he walked away from me so quickly. He didn't jump in, he got in slowly and quietly. I know I'm not a bad parent, the kind the media would have painted of me had he drowned or had some serious condition from secondary drowning. Oh yeah, let's not forget the overwhelming fear of secondary drowning that accompanies a near drowning experience; again, something I've been educated on for nearly 15 years. Because I wasn't quite sure how long he was under for, we made an evening trip to the emergency room to have some chest x-rays done and to rule out secondary drowning.

Thank God he was fine.

But it was a close one. I'm not sharing this to warn people about the crazy shit that can happen to our kids, but to let other moms know that you can be a damn near helicopter parent and still, bad thing will happen. Scary, near death experiences can still happen to non-neglectful parents. It happened to me, and it changed me forever. 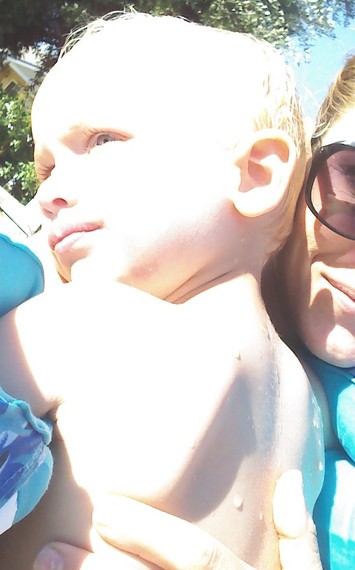 More:
secondary drowningParenting Parentsswimming poolsparents-kids
Newsletter Sign Up
Raise the kind of person you'd like to know
Subscribe to our parenting newsletter.
Successfully Subscribed!
Realness delivered to your inbox