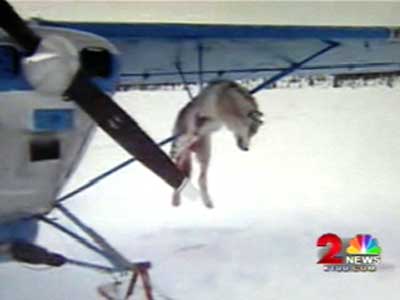 A scrivener at the National Review on why they like Sarah Palin instead of smug elites:

"So along comes someone who really is from the working class. She likes it--and finds snowmobiling, hunting, fishing and living in small-town America not as a wasteful use of carbon-emitting fuels, cruelty to animals, gratuitous depletion of our resources, or proof of parochial yokelism. Instead it is a life of action in an often harsh natural landscape, where physical strength is married to intelligence to bring us food, fuel, and progress."

Well call me a smug elitist, but snowmobiling and ATVing are wasteful uses of carbon-emitting fuels, (you wouldn't know it from this election but there is a CO2 problem in the world) that tear up the landscape and disrupt wildlife. As they write in Thrillcraft, "there is no nice way to describe the true dangers thrillcraft pose to the integrity of our public lands: they terrorize wildlife and other people;destroy the quiet and peace of the woods; and pollute, degrade, and vandalize much of our natural legacy." The National Park Service tried to ban snowmobiles from Yellowstone National Park, (George Bush overturned it) noting issues of

"air quality, visibility, soundscapes, health and safety, impacts on wildlife and visitor experience. Their study found that in virtually all areas, snowmobile use damages the park. The agency says that visibility will be impaired around Old Faithful, visitors will hear more noise, and "employees and visitors who are susceptible to respiratory problems would likely be affected." Science implicates human health, of both visitors and park employees, in another way: snowmobile use spreads poisons, benzene and carbon monoxide among them, through both Yellowstone and Grand Teton National Parks."

video on the evils of aerial wolf hunting

While I have personally never hunted I know many people who do, and they are appalled by the idea of hunting wolves from aircraft. It is of questionable legality; in 1972 it was made illegal by the Airborne Hunting Act, passed after a nationwide outcry against aerial hunting of wolves in Alaska. However a loophole in the act allows it for the purposes of "control." According to Defenders of Wildlife, it is promoted by

"the state's small but politically influential commercial hunting interests. Their clear intention is to eliminate as many of nature's major predators as possible to artificially increase moose and caribou numbers where it'll then be easier for urban and wealthy out-of-state hunters to shoot their trophy animals."

There are lots of people living in small towns who manage to enjoy themselves without "gratuitous depletion of our resources" and who bring us food, fuel and progress without spending their spare time shooting from airplanes and bombing around on snowmobiles. They do it without running their toys on gasoline that could have been used to reduce our reliance on imported oil. They might even question why we "drill, baby drill" just to "live a life of action." They don't look like smug elitists to me.

More from TreeHugger on huntin' and fishin' and atvs and snowmobiles
Trends in Office Design: The Natural Look by Sarah Palin
Michael Pollan Goes Hunting
Book Review: Thrillcraft
New York Times on Off-roaders Chewing Up the West
ATVs: Destroying the Climate and Environment for Fun