There's a new Sheriff in town for publishers to fear and it isn't Amazon. It's Bookbub, the ebook discount promotion behemoth that sends millions of emails every day to book lovers looking for bargains.

Over and over, Bookbub has taken the work of authors rejected by publishers as "Unsellable" and turned them into best sellers. I'm a prime example.

Twenty five publishers, including St. Martin's Press and Little Brown passed on my book, Eat It Later. Mastering Self Control & The Slimming Power Of Postponement. The consensus was "It won't sell." Even my agent said, "We've hit the wall, I think you should self-publish it." So I did.

As a hybrid author and book marketing consultant I knew exactly what to do. I swung into action and three months after the last rejection from a New York publishing house my ebook and paperback was up on Amazon, Apple, Barnes & Noble, and Google Books.

The marketing was tight and right. Professional cover, professional format conversion, SEO in place and all capped with a terrific review from Kirkus. I used every tactic that has made many of my other books and the books of my clients, so successful.

My book hit the ground like a boulder thrown from a cliff. This is a rather startling thing for a marketing expert to admit about his own book, but the truth is experts are not exempt from an ugly truism: Most books fail.

Eat It Later posed a significant problem for me. I typically write about sex and relationships. But Eat It Later is about weight loss. Meaning, no one knows who I am in that genre so I can't rely on my name, reputation or fans from the genre I've been working in for ten years.

I even broke my own rule and tried Facebook advertising (they do almost nothing for sales. I even wrote a controversial piece in Digital Book World called Why Facebook Can't Help You Sell Books). Even tried Google Adwords. Nothing. Nada. Zip. My treasured book took its place in the great dining hall of sales and fell face first into the gazpacho.

It was time for a Hail Mary pass: Bookbub, the giant ebook discovery site that sends millions of targeted emails to rabid fans looking for deals. There's just one problem: It's almost impossible to get into Bookbub. They reject 80-90% of submissions (almost as high as publishers!). Click here to find out how to maximize your chances. There's a good reason for this. They don't want to paralyze their subscribers with too many choices. They know if subscribers trust them to only market a few stellar books at a time, they have a better chance of keeping that subscriber happy and making money off them. I had to apply for the privilege of paying Bookbub $630 to include my book in one single email. Apply.

Fortunately, Bookbub accepted Eat It Later (they've refused most of my books) for a 3-day, $.99 cent promotion and this is what happened: 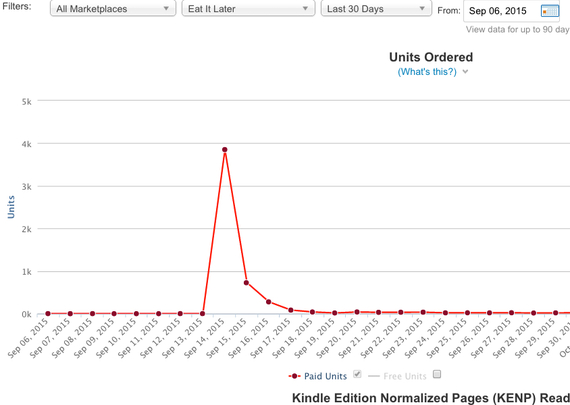 KABOOM! Eat It Later's performance even exceeded Bookbub's prediction for it. Bookbub publishes estimates for how many books you'll sell through their email marketing. Their sales estimate for my genre (Advice/How-To) was 2,340 units. I ended up selling over 6,000 units in three days.

While that's an impressive performance for a book completely rejected by New York publishers it meant next to nothing to me. I find it offensive to price the fruition of eight months of blood, sweat and tears at $.99. At that price, it's a commodity. And I did not become a writer so that people could perceive my work as a commodity indistinguishable from the product next to it.

To me, 99 cents isn't a business model; it's electric shock therapy to see if there's any life left to your book. It artificially raises its visibility, often propelling it to nosebleed heights (Eat It Later hit a high of #17 in all of Amazon's Paid category).

But again, so what if your book hits that high for a few days? Amazon reduces royalties of books priced at $.99 to 35% (from 70%). The REAL criteria of success isn't what a book does at $.99 but what it does when you switch it to a price where you can make a reasonable profit.

As soon as my 3-day, $.99 special ended I raised the price of Eat It Later to $7.99. From much of my client experience with Bookbub I knew there was only one direction my book sales would take once I reverted to a much higher price: DOWN. The question was, how fast would the book come down from its orbit? Would it plummet like a meteor? Fall gracefully like a feather?

I had one client that hit #50 on Amazon. At the end of the 3-day promotion we switched his novel back to the normal price ($2.99). We watched in horror as it sank to its pre-discount sales within days. The awful truth is that this is what happens to many if not most books that use a low/free strategy.

So what happened to Eat It Later? Did it crash like a meteor, float like a feather or somewhere in between? 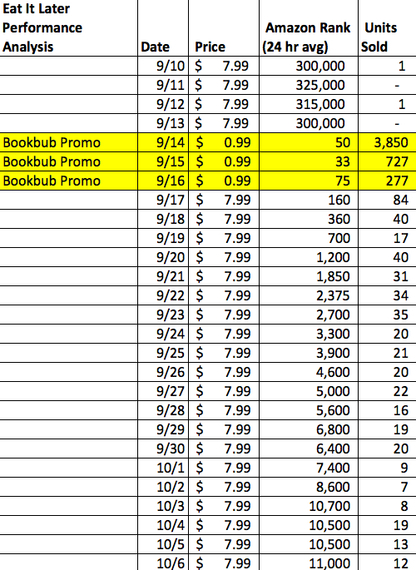 As you can see, it went down more like a feather than a meteor. Fully four weeks after I turned to the $7.99 price, the book was still in the Top 20 in Weight Loss, a category any publisher will tell you is hard to crack into.

Lessons Learned
Bookbub can be a phenomenal asset to book sales. It took my book, which 25 New York publishers rejected, and turned it into a category best seller. It is becoming a market maker never seen before in publishing. Partly it's because Bookbub is so big (in my genre alone they have over one million email subscribers), but also because it's so picky about the books they'll promote. It's now doing the gatekeeping that used to be the exclusive province of publishers.

If a publisher takes you on (and most won't) it does two things for you: It validates your work and gives you a real shot at sales. It's the same thing with Bookbub. It most likely won't take your book (or your money), but if it does it may actually do more good for your book than a publisher.

Bookbub calls into question the one skill publishers seem so proud of--their ability to spot a big seller and market them well. If publishers are so good at picking winners, then why is Bookbub making so many best sellers out of books they rejected?

Michael Alvear is a book marketing consultant and author of Make A Killing On Kindle Without Facebook Or Blogging. He blogs in the mindful eating site, Eat It Later.