For 48 hours starting at 9:30 am local time today, people around the world can watch and share Time To Choose, my latest documentary and a project I hope can help the world understand and address our common climate challenge.

This film started with a phone call two years ago that piqued my curiosity about the climate problem and, even more importantly, how to solve it. As I learned more, I found myself drawn into what became, without question, the most fascinating, beautiful, scary, hopeful project I have ever undertaken, with each shocking horror scene -- and there were many -- balanced by the most profound beauty and inspiring optimism I have ever experienced. Yes, climate change is really scary; but it is also a totally solvable problem, and if we do it right, we will also make the world a far better, happier, safer, more prosperous place. 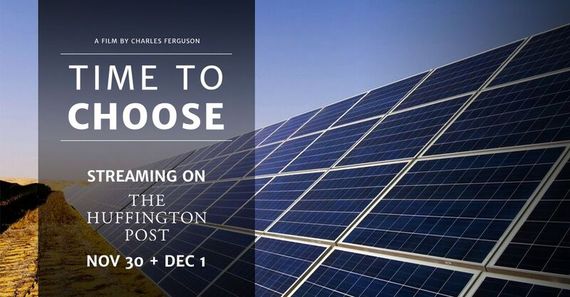 To make the film, I was given complete editorial freedom, a generous budget, and unparalleled access to experts around the world. Before we shot a single frame, we conducted hundreds of interviews with climate scientists, economists, national security experts, energy executives, farmers, urban planners, government officials, animal rescue organizations, and health experts.

We filmed all over the United States, Western Europe, Brazil, China, Nigeria, and Kenya. No amount of research could prepare me for what I saw, and what I've tried to show in the film. On the dark side, people had told me about the annual "burning season," destroying forests in Indonesia and Malaysia for palm oil plantations. But the reality stunned me. We couldn't even reach the area for four days, because the smoke was so dense that it forced airports to close for hundreds of miles. When we finally flew in, visibility was perhaps a quarter of a mile and the sun was invisible. Then, flying directly over the fires in a small plane, I saw destruction so vast that no Hollywood special effects could ever compare. You'll see - it's in the film.

All of our Indonesian filming was illegal -- in Indonesia, filming without a journalist visa is punishable by five years in prison, and during our trip, two French journalists were on trial for this "crime." Now I know why -- this is a country with a lot to hide. A week later, I interviewed the deputy chairman of the Corruption Eradication Commission (KPK), Bambang Widjojanto. He was courageous, inspiring, witty, and shockingly direct. But shortly afterwards, he and the KPK chairman were framed by the highly corrupt national police. There was a popular uproar, and their futures now hang in the balance. That's in the film too.

But for me at least, the two biggest surprises were more general. The first big surprise was a negative one: realizing that the same practices that are causing climate change are also responsible for far more immediate destruction. Coal mining in China has killed a million people through accidents and black lung; mountaintop removal mining has devastated Appalachia; oil and fighting over control of it has killed millions and financed awful regimes from Iran to ISIS; industrial agriculture has poisoned our food and water, endangering our health; deforestation is killing off some of the most beautiful animals on our planet.

But my other big surprise was in the opposite direction. We don't need to keep living this way; we can solve these problems, right now. Renewable energy works: both solar and wind energy are becoming fully competitive with fossil fuels, with almost none of their damaging side effects. We can design cities to be more walkable, livable, efficient -- and fun. Electric cars are quiet, efficient, nonpolluting, and inexpensive to operate, and in less than ten years, they will be better than gasoline cars in range, weight, and price. And -- biggest surprise of all -- if we eat less meat and processed industrial food, we will not only help save the planet but will also live longer, healthier lives. The film shows the beauty of everything that we've placed at risk, the new technologies that can save us, the inspiring people leading the way.

The battle to stop climate change is entirely winnable. Only a very small number of people stand in the way. But they are very wealthy, powerful, corrupt people, and the hour is growing late. Do we let them win? It's #TimeToChoose.