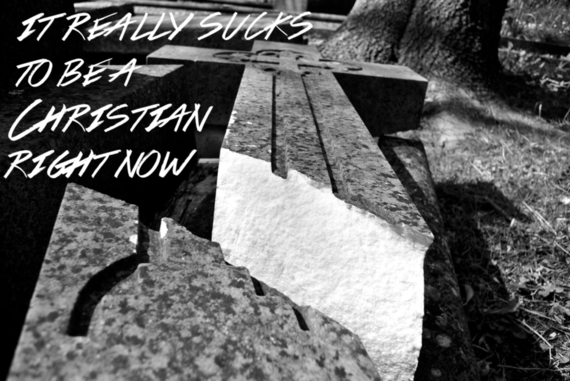 These days I run away.

I cringe when I think of sitting and discussing anything more than the extremely superficial with those who aren't my most-trusted confidants. I'm content to show up five minutes after Sunday service starts, sit on the third row from the back with my wife and children, and sneak out during the benediction. For the first time in ten years, I have no leadership role or even anything that would resemble involvement in my local church. I go a few times a month, and that's it.

Why am I ok living this way? Because I've stepped out of the conflict among Christians. When I am anonymous, I have no chance to offend someone with a Facebook post, to feel like I have to choose sides in a cultural debate in order to honor God, or to be ostracized for seeing the world differently.

I'm too liberal for the Republicans and too conservative for the Democrats. I'm a 30-something Southerner, born and raised in the buckle of the Bible Belt. I was dunked by the Baptists, spoke in tongues in the Assemblies of God, went to a Church of God college, returned to my Baptist roots as a youth pastor, became a Methodist, and now I'm back in the with the AG's, but agrees with about 80 percent of the Catholic Church's teachings. I attended George W. Bush's first inauguration as a senior in high school but have voted Democrat in at least one general election. I study the King James Bible with a concordance but I read The Message on my iPhone for enjoyment, while having a glass of wine and smoking a cigar.

Maybe there was once room for people like me. Maybe everyone is like me, if we're all honest with each other. But our culture no longer allows contradictions. I run from discussions with other Christians because it almost always ends poorly. A loss of friendship, a loss of faith, a loss of fervor. I'm tired of being burned.

But maybe disengaging from any political or cultural stance is actually making me a more faithful follower of Christ.

I'm running away from Billboard Christianity that plasters slogans and quotes on t-shirts and newsfeeds, but I'm running toward the Jesus of the Gospels, who takes me just as I am, despite my contradictions. I don't know if the rapture will actually happen and I don't know the solution to the refugee problem. I don't know if Donald Trump is a Christian any more than I know how I feel about Hillary Clinton's private email server. I don't know if the King James Bible is the only legitimate version or if The Shack is actually heresy.

But God never asked me to know any of this.

I don't have all the answers, but I do know Jesus. So maybe my political views don't matter anyway. What I know for sure is God loves me, and wants me to love my neighbor. I am doing my very best, as a very broken human being, to live these two realities out in the best way I know how. Otherwise, I'm keeping my mouth shut.

I used to live my life publicly, but I no longer have the energy to fight with other Christians. Maybe running away from the fight is the best way for me to run towards Christ.