In my husband Olof's and my relationship, I've always been the one who resisted change and he the one who embraced it. So I was puzzled when the big tree in our front yard died, Olof refused to let it be removed. But it was when he started using "feeling" words about the tree that I became officially alarmed.

My husband is an engineer and a former Air Force pilot. He's out-going, universally liked, incredibly kind, and has a great sense of humor. But a sentence that starts with the words "I feel" is never going to come out of this man's mouth.

Actions, he maintains, speak louder than words. Okay, but as I've pointed out to him on more than a few occasions, sometimes words would come in really handy.

I, meanwhile, am pathologically sentimental toward anything that has been in my possession for more than two minutes, and particularly toward trees. I had an especially strong attachment to this tree which had not only been the focal point of our front yard for four decades but was the backdrop for every family photo. I'd spent hundreds of happy hours reading in its abundant year-round shade.

In earlier years it was constantly full of kids, both ours and neighbors. The tree tolerated all that activity well, even the rope bridges and tire swings and having endless wooden steps nailed into its trunks and branches, never mind all manner of platforms and tree forts. If it could speak, I think it would say those were its happiest years.

So when the tree started losing its leaves and oozing sap last fall, I hired numerous agricultural pest people and arborists to try to diagnose its afflictions and save it.

One tree guy looked me right in the eye. "Well, you know, lady, sometimes things just get old and DIE."

"I'm aware of the concept," I said coolly, making a note to savage him on Yelp.

Multiple arborists said that the tree, if not officially dead, was terminally moribund, and more to the point, unsavable. With the heaviest of hearts, I started researching tree removal companies and even a new tree to replace it.

After being cut back 40% as a last ditch effort in January, the tree did begin to produce a few leaves this spring - the operative word here being "few." Every day Olof was out front examining it, counting leaves.

"But it's trying so hard," he insisted. "I just think anything that is working so hard to live needs to be encouraged. You're not being fair to it!"

Fair? And now it has a persona? Did it also have a name he wasn't sharing with me? And by the way: who ARE you?

In the 51 years I've known him, Olof has always been gracious about not pushing me into changes I wasn't ready to make no matter how crazy it made him. So giving the tree another month seemed perfectly reasonable. There was still time to take advantage of the growing season.

But three more months went by, the leaf count was down to 11, spring had sprung and to me it just looked like we had a large dead tree in our front yard. Sitting outside reading under barren branches is very depressing, never mind seriously low on shade. But Olof still clung to hope. "Just one more month!" he implored. And then he'd go out and count the leaves again, now on the fingers of one hand. In a strong wind, I feared the tree could come crashing through the roof..

Finally, I said gently, "Olof, I think it's time to pull the plug. But I won't do it unless you say OK." In retrospect, he never actually said OK, just quietly nodded his head. I thought he was on board with this until he glumly queried a few nights later, "So when are the assassins coming?"

Ironically, the night before the "assassins" came, I was the one outside with my arms around the tree trunk, crying and thanking it for so much joy and happiness. The kids, who had planned to build some new tree forts in it for their kids, were really sad to see it go as well.

We at Nostalgia Central are trying to bond with the new tree, its 10-inch circumference looking pretty puny in comparison to the 65-inch circumference of its predecessor. So now all I have to do is wonder if the embassy on Klingon has returned my real husband. There's an easy way to find out. I could just ask him how he's feeling. 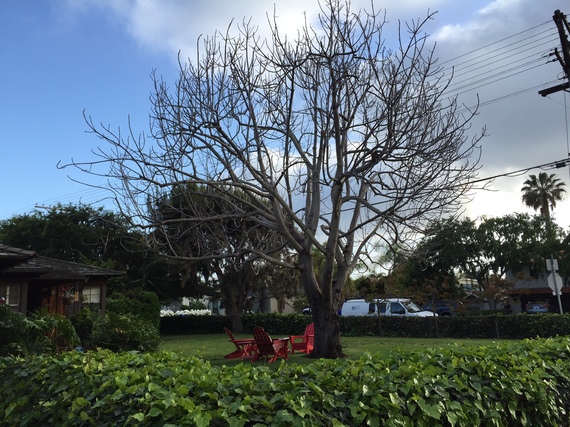