My first assault happened when I was barely in middle school. The experience confused me, and I didn't know how to process it. The assault happened with a family member (around the same age as me) who started to touch me while I was asleep. I didn't know what to do, so I froze and tried to convince myself that it was something I'd wanted.

I didn't feel that I would be believed by my family, not because of anything they said to me, but because of the implicit messages I received from society. Sex was never talked about, and I knew anything that related to sex in any way was taboo. I had no idea how I would explain this to anyone and I figured they would punish me for being involved. The messages I received about rape by society- that it was shameful to be a victim and that it was your fault if you were victimized- kept me silent.

Victim blaming is discussed frequently in feminist circles. It is a part of rape culture, which is a culture where rape is normalized and perpetuated through societal attitudes and norms. Instead of perpetrators of sexual assault having to take responsibility for their actions, victims are scapegoated and blamed for their assaults. 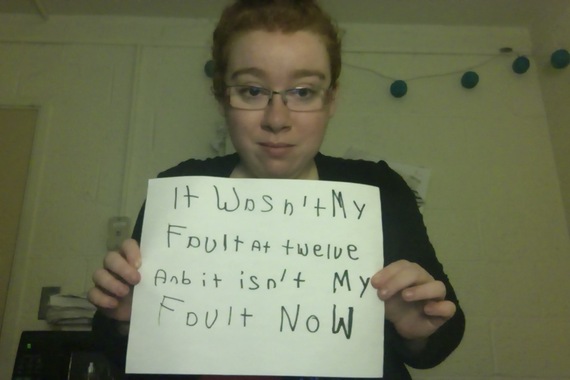 This narrative is usually told from a cultural perspective, but victim blaming often causes survivors to internalize this shame and blame themselves. I myself have done this, as a survivor of sexual assault.

For years I didn't know what to think or do. I knew that I wouldn't be believed, so I kept quiet. I didn't tell anyone for almost four years.

It was when I started to learn about sexual violence that I started to question the nature of this incident. Being in Cleveland Rape Crisis Center's Youth 360 program and learning about consent and what constitutes sexual violence, lots of red flags were raised.

I was extremely confused and I thought that maybe it was something that was all in my head, which I had blown out of proportion. I didn't know how I would possibly tell anyone about it and I knew that there were people in my family wouldn't have been supportive and would likely not believe me.

This new knowledge and understanding of my experiences inspired me to be an activist. It was shortly after this that I got involved with Scenarios USA and helped to create I Will End Sexual Violence, a social media campaign run through Tumblr, which challenges people everywhere to help end sexual violence. Helping to tell other people's stories eventually led me to tell mine.

When I did start to share my story (especially with those very close to me) I was met with silence or awkwardness, with the other person not really knowing what to say. There were some who even dismissed it as child's play that wasn't really serious or worthy of concern. However, there were others who showed me support and allowed me to speak about it in a candid way with them. My family had mixed reactions -- some couldn't believe it. Others never doubted me.

It would have been helpful to have been believed without question or without people making excuses for my abuser. Some of the first people I told--close friends of mine -- trivialized the abuse or dismissed it all together. Survivors need to feel supported and believed -- this alone can make a difference in their journeys.

I also wish that I had been taught about consent and sexual violence by someone, at some point in my life, before the rape crisis center. I think if I felt comfortable talking about these things with others and understood consent, I would have realized a lot sooner what I had experienced was assault and not have internalized the messages in culture around victim blaming. This could have changed my life. Consent education is vital.

Why is our first instinct as a culture to rally around abusers?

Why is our first instinct to ask survivors of sexual assault, what they were wearing, if they flirted, did they have too much to drink?

Blaming the victim is not just siding with the abuser, it's continuing the abuse.

Because of all this blame, shame, and guilt that I felt, I ended up desperately looking for love in all the wrong places, and making decisions based on those feelings.

Instead of victim blaming, society needs to have the courage to support survivors, and hold abusers accountable. Instead of telling a survivor they were asking for it, what if the first thing they heard, was "How can help? How do I support you?" And most importantly, "It's not your fault."