"What happens when you put a boy in front of a girl and ask him to slap her?"

That's the central question of "Slap Her," an Italian PSA about domestic violence that has over 35 million views on Facebook. Created by Italian news organization FanPage.it, the video introduces a group of boys between 7 and 11 years old. After the boys answer a few questions about themselves, the interviewer introduces them to a girl named Martina. 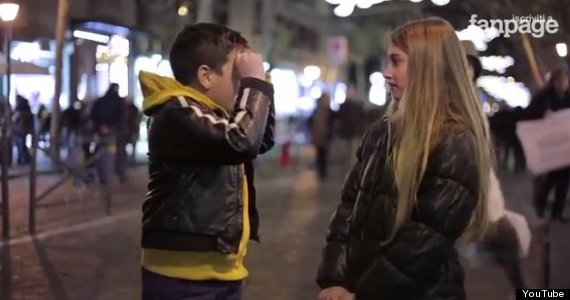 Each boy receives instructions to say what he likes about Martina, give her a gentle caress, make a funny face at her, and then, "Slap her. Hard." Upon receiving that last instruction, the looks on the boys' faces say it all: They are shocked, confused, even sad. And they all refuse to hit her.

Asked why they won't hit Martina, the boys give answers like "you're not supposed to hit girls," "I don't want to hurt her," and quoting an Italian saying, "Girls shouldn't be hit, not even with a flower." And perhaps the most powerful answer: "Because I'm a man."

Though it's likely staged, the video's message is important -- especially in a country like Italy, where the United Nations has reported domestic abuse is "the most pervasive form of violence," and almost 32 percent of women between the ages of 16 and 70 experience some form of physical or sexual violence in their lifetimes.

But some have critiqued the PSA, for its portrayal of intimate partner violence.

Children's media culture expert Rebecca Hains wrote in a blog post that she found Martina's role in the video to be problematic. "While the producers present the boys as interesting people, they present Martina not as a person in her own rights, but as a girl who is expected to be an object of boys’ desire," Hains says, adding. "[O]ur boys need to understand that relationships are about respect and mutuality. Girls are not prizes to be won; they’re real people."

Hains also took issue with the lack of consent in video. "The off-camera voice directs the boys to touch the body of a girl they desire, without her consent," she writes. "It’s crucial to remember that Martina doesn’t invite them to touch her; she doesn’t say, 'May I have a hug?' She just stands there, silent, while they place their hands upon her body."

Elizabeth Plank at Mic pointed out that the whitewashed video leaves out Italy's population of immigrant and undocumented women, who are particularly vulnerable to domestic violence. "The video may raise awareness," she writes, "But it also oversimplifies the issue."

Ultimately, "Slap Her" makes an important point, but it does so imperfectly.