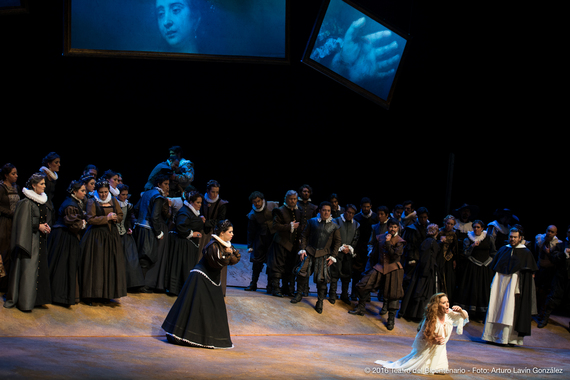 A tremendous love and admiration for Italian music and opera is one of the lesser-publicized aspects of the Mexican culture. Each year there are productions across Mexico and the well-informed audiences tend to respond with great enthusiasm. So, it is no surprise that you would find a world-class opera production like Lucia di Lammermoor being performed at a theatre in Central Mexico.

The rich tradition of opera in Mexico is due in part to appearances by such legendary singers as Maria Callas, who sang at the lovely Palacio de Bellas Artes in Mexico City in the early 1950's. The opera career of the Spanish tenor Plácido Domingo is inextricably tied to Mexico, as his parents brought him there when he was quite young and exposed him to music during his youth. In what is generally considered to be his operatic debut, he sang the minor role of Borsa in Verdi's Rigoletto on September 23rd, 1959 at the Palacio de Bellas Artes. His stellar international career took off from that modest beginning with appearances at the preeminent theatres world-wide, including in Mexico. Domingo first interpreted the role of Mario Cavaradossi in Puccini's Tosca in a 1961 performance in Mexico City [1] .

While the capital city figures prominently in the Arts, there are diverse venues for opera in Mexico, including the relatively new Teatro del Bicentenario in Central Mexico. The theatre was established on the occasion of Mexico's Bicentennial in 2010 and has consistently offered high-quality theatre, dance, music and opera productions since its inception. The Director, Alonso Escalante came to the Teatro del Bicentenario on the heels of a stellar career as the Director at the Instituto Nacional de Bellas Artes in Mexico City. His artistic vision integrates perfectly with the conceptual underpinnings of the theatre as a beacon for the arts in Central Mexico. In an interview, he articulated that it is not just a matter of presenting high quality productions, but it is also important to strike a careful balance between the traditional and the contemporary in order to appeal to a wider audience.

Every year they have presented opera productions, especially Italian operas, with an ensemble cast featuring both local Mexican as well as international artists. The list of works includes Donizetti's L'elisir d'amore, Puccini's La bohème, and Verdi's La Traviata, among others. Earlier this year they opened the 2016 opera season with a production of Rossini's La Cenerentola. 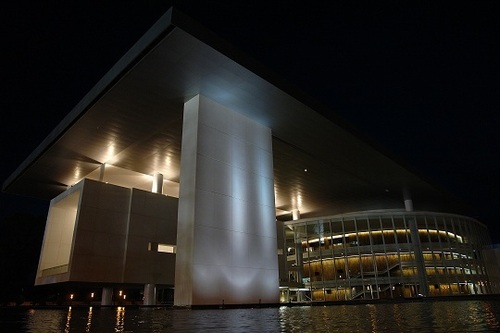 The brand new production of Donizetti's Lucia di Lammermoor just closed. It featured Spanish soprano María José Moreno and Mexican tenor Ramón Vargas in the lead roles. Ramon Vargas had his debut at the Metropolitan Opera in New York when he substituted for Luciano Pavarotti in the role of Edgar, which he has continued to interpret often. These protagonists were joined by José Adan Perez(Enrico), the Mexican Baritone who performs frequently in the United States, along with the Bass José Luis Reynoso (Raimondo Bidebent), Tenors Edgar Villaba (Lord Arthur Bucklaw) and Gilberto Amaro (Normanno), and Mezzo-soprano Melissa Reuter (Alisa). The Orchestra and Chorus of the Teatro del Bicentenario was under the musical direction of the Serbian director Srba Dinic.

Later this year in November the theatre will present Puccini's Madama Butterfly. Besides the regular schedule of events, the Teatro del Bicentenario participates in the Cervantino Festival, dedicated to the Spanish writer Miguel de Cervantes, which has grown steadily in popularity over the years and is now a well-established phenomenon involving artists from around the world. This year, there are several Italian music events including the Intermezzo Don Chisciotte by Giovanni Battista Martini and the Sabat Mater by Gioacchino Rossini on the program for the festival.

As part of any visit to Mexico that includes a stop-over in the lovely state of Guanajuato, it appears there will be plenty of opportunity to catch some great productions of Italian classical music and opera.