Whether you've been studying Italian for years or are currently mastering the art of "my name is," these 10 expressions are an essential addition to any vocabulary. You won't find them in Italian books, but you'll hear them all over the streets. Understanding them will give you a huge boost in comprehension. Using them will make you much more fun to talk to. 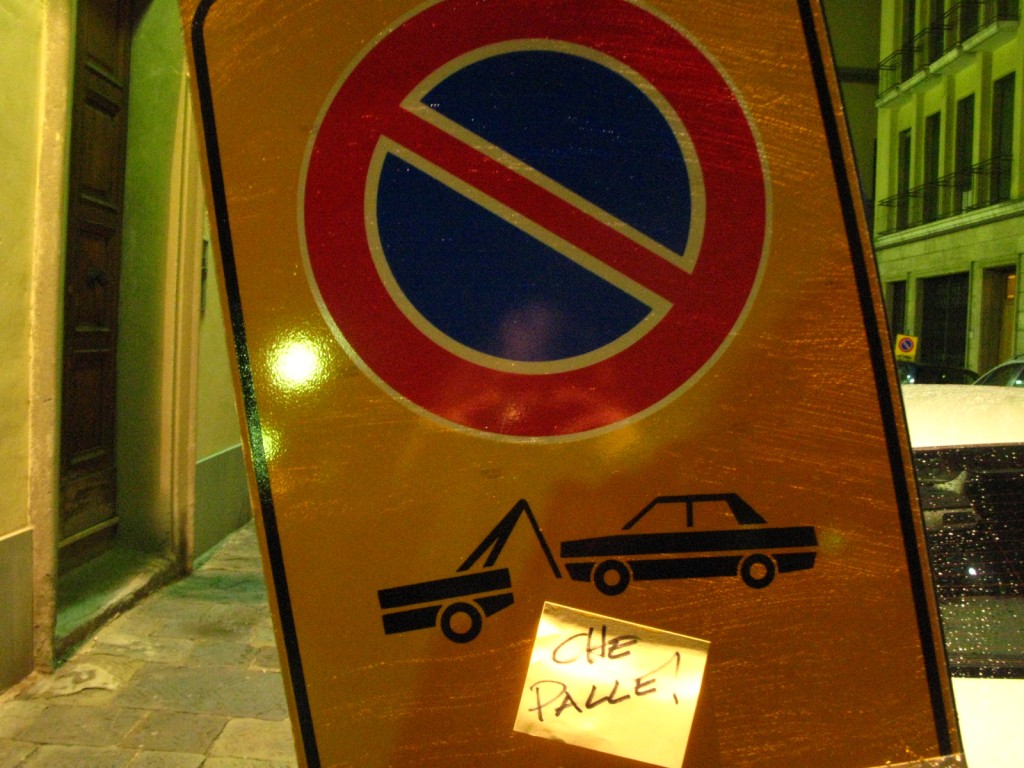 Translated word for word as, "What balls!" it's the short and sweet equivalent to "What a pain in the ass!" Tack it onto the end of any annoying activity for added emphasis: "We have to climb all those stairs? Che palle!" or mumble it under your breath when someone causes you general agitation: "Put a scarf on or you'll get pneumonia!" Che palle.

An adventure in Italy done right will leave you with plenty of chances to use and hear, "What a cool thing!" I met an Italian soccer player today! "Che figata!" We learned how to make handmade pasta! "Che figata!" "It's official. Prada wants to hire me!" "Che figata!" 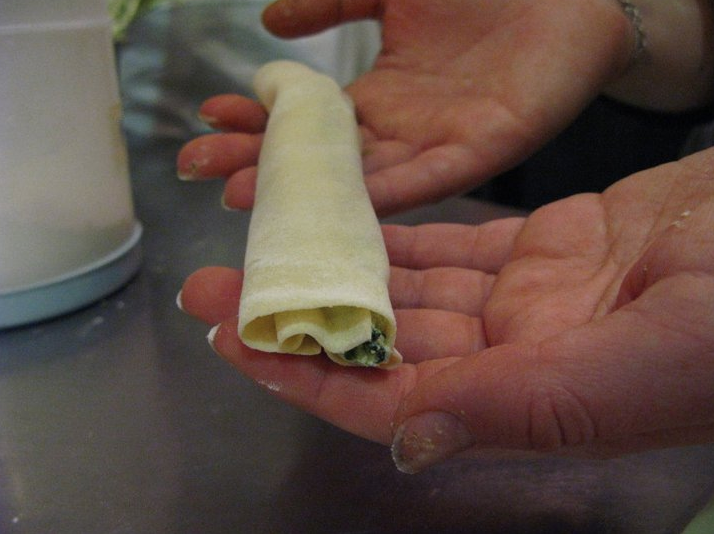 You made manicotti by hand? Che figata!

"Don't worry about it!" or "It's nothing!" Just like in English, you can use it when you really mean it: "Thank you so much for the great meal!" "Figurati!" Or to be nice when you really don't: "I'm sorry I spilled red wine on your brand new, white 500€ Gucci shirt." "...Figurati!" 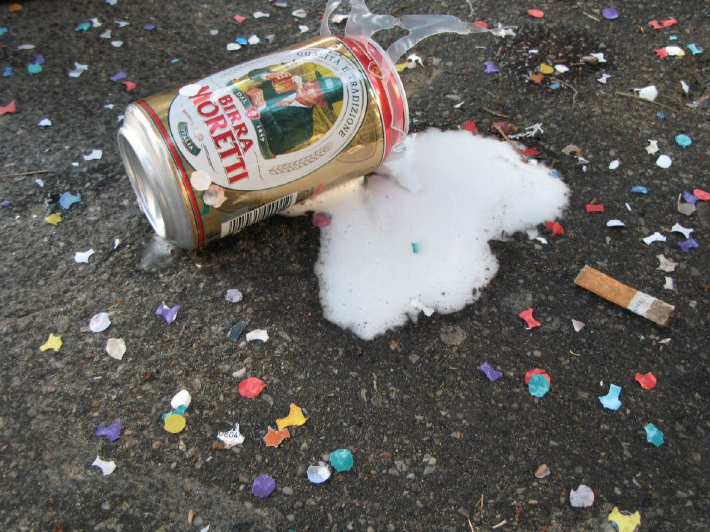 "Sorry I partied too hard at carnival." "...Figurati!"

Italians take expressing discontent to a whole new level with the descriptive "It makes me poop," (HA) leaving us English speakers in the dust with our 1 million times less dramatic and funny, "It's awful." "That restaurant? Mi fa cagare!" "His tight shirt? Mi fa cagare!" "American coffee? Mi fa cagare!"

"How disgusting!" Here are some likely scenarios you will encounter in Italy, just waiting for a "che schifo." The people sitting next to you on the bench think they're in their bedroom: "Che schifo!" A pigeon poops on your head: "Che schifo!" You see a 70 year-old man hitting on a 19-year-old girl: "Che schifo!" 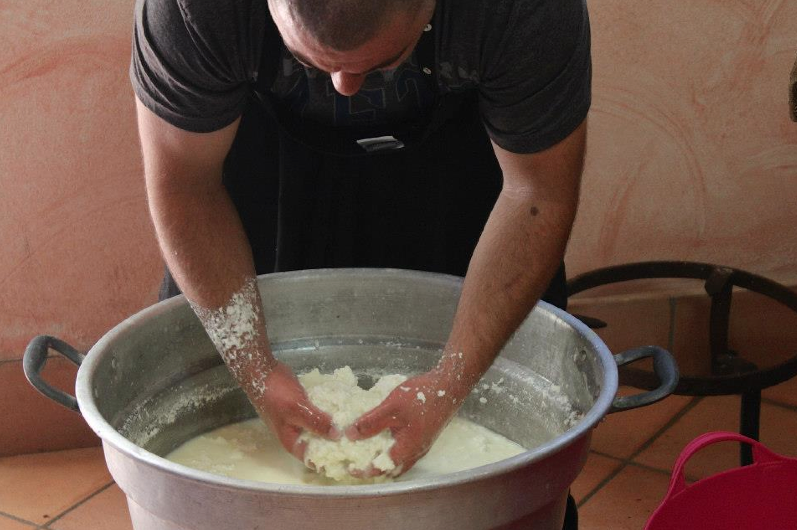 With a pronunciation not unlike a drawn out English "die," it may sound initially off-putting as you hear it shouted between sweet Italian children and little old ladies. But "dai" just means "Come on!" as in, "Please, oblige me." Use it when someone refuses: "Let's go to Sicily." "No." "Dai!" Or to push someone to do something: "One more shot of limoncello, dai!" It can also be similar to "stop it!" Someone's stealing bites of your gelato? Knock them in line with a "dai!" 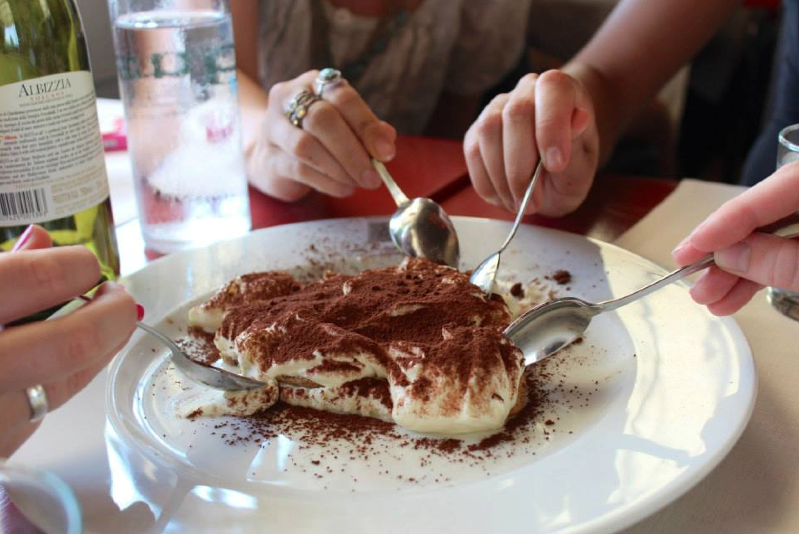 DAI! Get your own tiramisu!

Its translation means "less bad," but it's used like, "Thank God!" So you can say: "Fiorentina won? Meno male!" "I passed the test? Meno male!" You can also literally say "Thank God!" which is "Grazie a Dio!" (GRAHT-see-eh ah DEE-oh!). Just make sure you get the "a" in there. Even though it feels more natural to say "Grazie, Dio," that leaves you speaking directly to God: "Thanks, God!" 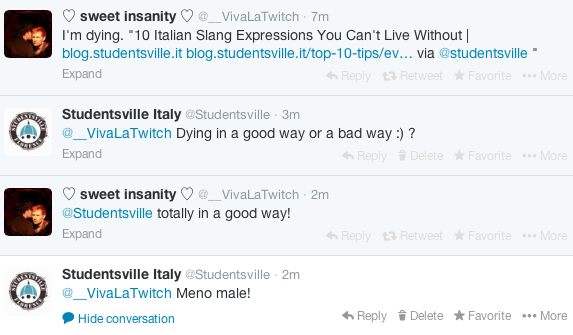 The Italian counterpart to "I wish!" "Let's hope!" or "Maybe!" When someone asks you if you plan on coming back to Italy, marrying an Italian and living in a villa in the Tuscan countryside, you can respond with "Magari!" (because of course you do). "Magari" is also great for playing it cool with the opposite sex: "Will we ever see each other again?" "Magari!" 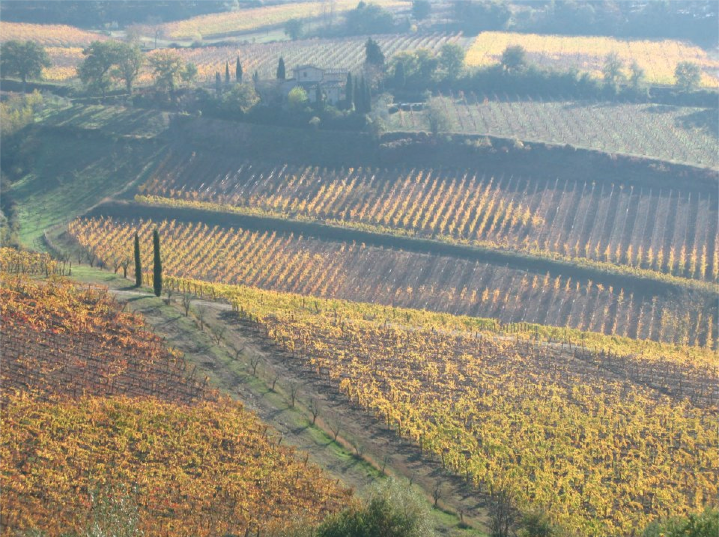 Magari I lived on a vineyard in Chianti!

"Enough!" "That's it!" Use it to stop the fruit vendor from filling your bag with 20 extra oranges: Basta, basta! Add it to the end of your order: "Una pizza e basta" Or shout it to the people singing songs at 4 a.m. outside your apartment window: "BASTA!" 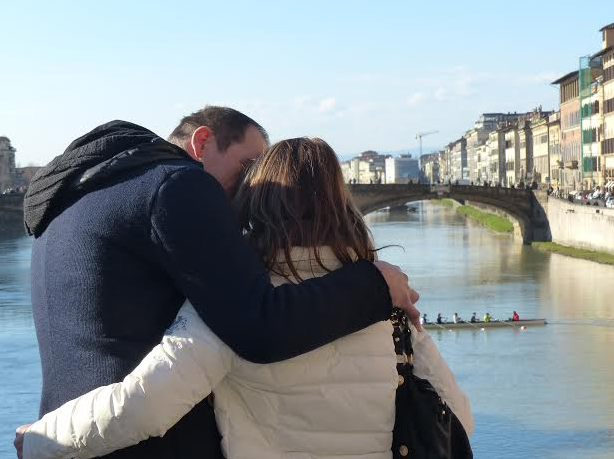 Basta with the PDA already! We get it; Italy is romantic. No reminders necessary 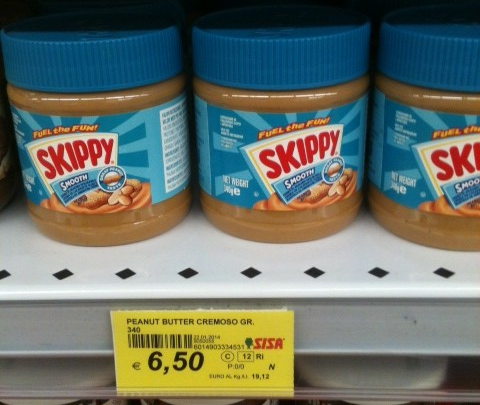 Whitney Richelle is an American journalist who has been living in Florence, Italy since 2009. She is a video host, blogger, and editor for blog.studentsville.it, where this post first appeared.