What exactly is the eurozone crisis? Is it a financial crisis? An economic crisis? Actually, it's a growth crisis. And as such, it must have growth solutions. Instead we are being bombarded every day with theatrical new developments (Papandreou's referendum, Berlusconi's wavering on reform and elections) that would make us think that it is all the fault of some corrupt and/or lazy politicians. Or the result of Europeans, and their governments, refusing to live within their means. The solution, we are told, is better politicians and belt-tightening.

We are told, for example, that Italy's enormous debt (118% of GDP), has caused the "markets" to doubt the country's ability to pay it back, causing the interest it pays on its bonds (the way it funds its debt) to rise to an unsustainable level (7% on November 9th). That rate, we hear, brings Italy to the 'tipping point' of default, and will cause it to exit the euro. Pundits claim that in order to "save" Italy, almost all the funds in the European Financial Stability Facility (EFSF) would need to be used (1 trillion euros). That figure is so big that it is deemed not only "too big to fail," but also '"too big to bail out."

The problem is that the ESFS is not a central bank. So it can't really calm markets that want to know that there is a lender of last resort that will insure against defaults and hence prevent the type of bank runs we used to see in the early part of the 20th century. The main weapon to combat the crisis should have been the European Central Bank's (ECB) monetary policy, i.e. the ability to affect the money supply through changes in the interest rate and buying of national bonds (quantitative easing), as it is starting to do now. Unfortunately, it's much too late because the contagion has already happened.

The Germans fear of inflation, but that is foolish because quantitative easing does not lead to inflation when there is massive underutilized capacity in the European Union. Their general feeling that the weak countries must sort themselves out has prevented the ECB from acting like a central bank. Which makes everything worse than it had to be.

Here's the rub: Even if the 'bailout' plan for Greece, Italy, and whoever is next worked (i.e. let's forget for a moment the too big to bail problem), the real issue is the so-called "PIIGS" countries (Portugal, Ireland, Italy, and Spain) and whether the austerity plans being shoved down their throats will help them. Or make them worse? Let's concentrate on Italy.

The Truth About Italy

We are told that Italians have been living beyond their means, in the lala land of La Dolce Vita. This could not be farther from the truth. Most Italians have very high savings rates (the highest in Europe) and have very little debt (e.g. most Italians own their own homes with little mortgages). And the public debt is mainly owned by Italian citizens, who happen to be quite risk-averse and hence invest in bonds. This means that the public debt is offset by private assets. Thus, the country as a whole is relatively solvent.

It is also not true that Italy spends too much. In fact, the Italian government has often spent less than its income, i.e. what it brings in via taxes--even with all the tax evasion! Not only is its deficit relatively normal (4%) but the reason its debt has been rising is not due to spending, but simply due to the very high interest that it has been paying on its accumulated deficit, i.e. its debt. And as long as the interest it pays on its debt (currently the astronomical 7% but even before quite high) is higher than the rate at which its economic output grows, then its debt/GDP ratio will continue to rise.

So what is the problem? The real problem in Italy is that it has hardly grown in the last 15 years. Figure 1 illustrates that Italy has grown less than the rest of Europe for many years -- not just those before and during the crisis.

Figure 1: GDP growth in Italy versus the average of big four European countries, 1995-2000

Why has it grown so little? Corruption and bureaucracy are certainly a problem, causing Italy to be 80th on the World Bank's ease of 'Doing Business' ranking. But that's not the whole story. If it were, then it would be enough to change the people in politics. The real problem is it has not spent enough (yes, it should spend more!) in areas that produce growth: human capital formation, training, research, education, and innovation. These are all the things, by the way, in which Germany has invested. Figure 2 shows that Italy has one of the lowest rates of spending on research and development (R&D). (Fig 2 presents R&D as a percentage of GDP). Its spending on R&D is below the average of both the EU and the Organization for Economic Co-operation and Development (OECD), a group of 34 countries democracies with market economies. In 2005, Italy's gross expenditures on R&D (what economists call "GERD") was 1.1%, compared to 2.25% for the OECD area and over 1.7% for the EU. What's more, the private sector funds only 40% in Italy. In the other OECD counties, the average of 63% (OECD, Technology and Industry Outlook 2008).

Figure 2: GERD as a percentage of GDP 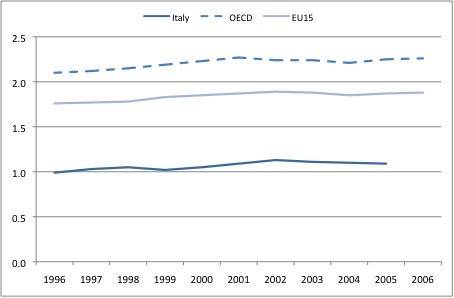 Figure 3 and 4 show that the problem is not the amount Italy spends on new capital and equipment, but rather the productivity of that investment (Gros, D., 'What Is Holding Italy Back', Vox, Nov. 9, 2011).

Figure 3: Investment in plant and equipment in Italy and Germany (% of GDP)

Italy indeed has one of the lowest rates of productivity growth, a key factor that leads to overall economic growth. This should not come as a surprise, given that productivity is affected by things like investments in R&D and new capital formation. In fact, the best measure of productivity, something known as "multi-factor productivity" or "total factor productivity," takes into account the effects of new technology and equipment on the performance of workers. 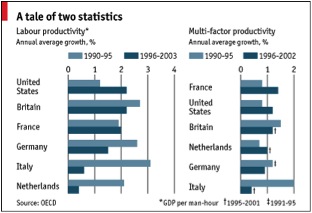 All these indicators have gotten worse since the crisis. But the roots go back much further. Unfortunately, after the crisis, the Berlusconi government has proved to be exceptionally inept at creating a stimulus for growth (too busy with other distractions!).

Germany has also been forced to institute its own austerity budget as a result of the banking crisis. But Germany is not following the same growth-through-cuts strategy that characterizes the UK, for example. (Along with many others, I believe that the UK is following the wrong strategy, but at least it has one, while Italy has just muddled along). While federal expenditures in Germany are being cut this year, funding at the German Ministry of Education and Research is rising by 7.2 percent, which includes a big chunk for university research excellence. The Germans are also increasing support for R&D at the Federal Economics Ministry.

Over the last decades, Germany has grown not through restraint, but through spending on R&D, education, human capital. Germany has created a financial system that rewards, rather than penalizes, those companies that think about the long run, rather than just short run stock price valuation. As I have argued in my recent book, The Entrepreneurial State, this is just the kind of spending behind the USA's periods of economic growth, with active state investments in new technology (the internet, biotech, nanotech) and commercialization.

Berlusconi's Exit Will Not Solve the Crisis

Even if Berlusconi exits the picture (hopefully today!), and even if he is replaced by a stable technocratic government that gets down to business and creates stability in financial markets, will there be a proper growth plan in Italy which will allow it to overcome its decade long disease of low growth? If not, by definition the debt/GDP ratio will continue to rise. And the current situation will present itself again in some months. The catastrophe will be delayed, but not prevented.

Perhaps the most ominous problem is that the "austerity" plan that Italy is supposed to accept is being run by financial interests of the IMF and the EC. These institutions are principally concerned with 'belt tightening' and with fear of inflation (all lenders fear inflation because it reduces their wealth). Fact: the few developing countries that have experienced growth in recent years (China, Brazil, Argentina, etc) are those that have turned their backs on the IMF's growth plans. To grow, Brazil and China have made expensive investments in key areas like education, and research, and in targeted industries like biotech and now green technology. These smart investments are causing them to be emergent leaders in the global race for new growth inducing technology.

IMF-style austerity will cause Italy to spend less in precisely those areas in which they need to increase investment!

So for both Keynesian reasons (lack of demand when incomes go down) and for Schumpeterian reasons (lack of growth spurring innovation), Italy is in a big mess. It can only survive with targeted fiscal policy in the right areas. It's time to learn from China and Germany. Austerity plans will only make things only worse. Of course, reform is needed (especially around corruption and other areas like pensions), but contrary to the "wisdom" of the EC and the IMF, the main reform it needs is to learn how to spend in the right places so to increase productivity, innovation and prevent the brain drain which has been hurting it for decades. And this requires spending.

And the rest of Europe? The Euro only works if it is backed with solid cohesive monetary policy (a proper central bank, something the ECB is failing to be), and solid cohesive fiscal policy. But when we hear about the latter, we hear only about reforms like pension reform and job flexibility. Those countries in the EU that are currently leading (mainly Germany and the Scandinavian countries) and complaining about the weak southern neighbors have been lead spenders in areas like green technology, which will be the 'next big thing' after the Internet and the growth-spurring machine of the 21st C. While many have argued that it is Germany's lower wages (unit labor costs) that are the source of its strength, its higher than average spending on R&D and green technology has been ignored in the recent debate.

Germany has blocked the ECB from engaging with proper central bank monetary policy. Will it now also put the stop on cohesive fiscal policies that will allow the PIIGS to make similar investments?

Let's hope not. Because if these countries can't spend in the right places, we will all pay.

Mariana Mazzucato is a Professor in Economics at the University of Sussex in the UK, where she holds the RM Phillips Chair in Science and Technology Policy, in the SPRU centre. She is Coordinator of a large European Commission FP7 funded project on Finance Innovation and Growth and is the Economics Director of the ESRC Centre for Social and Economic Research on Innovation in Genomics (INNOGEN). For more on her work, visit marianamazzucato.com.