To 99.99% of Americans the objection few days ago by Italian government (Financial Times, Nov 20, "Italy accuses Brussels of 'shaky' accounting") would have meant less than nothing. The Italian prime minister claimed about the way that putative technocrats at the European Commission calculated his country's "structural deficit".

To all but those familiar with the arcane intricacies of the Maastricht Criterion, the Six-Pack and the Two-Pack the objection might seem esoteric at best. However, what happens to the euro zone economies affects the US economy, and grasping the essence of these packs and pacts is necessary to understand why euro Europe is stagnating.

The Italian objection it has the potential to develop into a challenge to the strategy and tactics used by the European Commission to implement its mismanagement of the euro zone. This mismanagement has ensured that the member countries taken together show a post-2008 economic performance worse than the United States of the austerity-depressed United Kingdom. 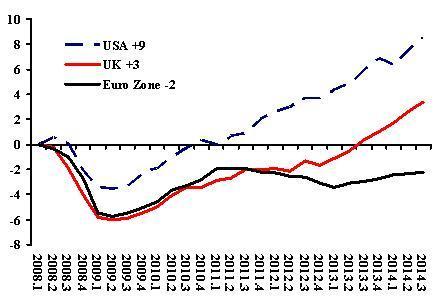 Nestled safely out of sight deep in the Stability and Growth Pact lies the "structural deficit", and how to measure it. The danger of the untutored wading into these waters is indicated by the official definition, "The actual budget balance net of the cyclical component and one-off and other temporary measures."

This sentence wins no award for clarity or precision. It is obvious that the definition refers to a conceptual measure that cannot be observed. Second, this structural deficit claims to omit "one-off and other temporary measures". The government re-capitalizations ("bailouts") of private banks in the early days of the Global Financial Crisis of 2008 would seem obvious candidates for a "one-off" measure.

The Spanish government moved from an overall fiscal surplus of 2% of GDP in 2007 to a deficit of -11% in 2009, and over half the increase represented funds for bank bailouts. The technocrats in the Commission (or their political bosses) did not judge the Spanish salvation of commercial banks to be either temporary or one-off (discussed in Chapter 9 of my new book). As a result the government in Madrid found itself facing demands from Brussels for severe expenditure reductions (as well as interest rate inflating speculation on public bonds).

Non-existence of the Structural Deficit

But the rub comes with the reference to excluding the "cyclical component" of the fiscal balance. A literally minded economist or non-economist might jump to the reckless conclusion that adjusting for the cyclical component would require eliminating expenditures on the increased payments to recently unemployed workers.

The downturn of the economic cycle means an absolute or relative fall in output, which lead to an increase in unemployment, which in turn increases payments to the unemployed. While this logic may appear obvious and sound, it is not accepted in Brussels where the EC dwells. Their "cyclical component" makes no adjustment for expenditures linked to job losses, which perhaps reveals the Commission's view that the unemployed are feckless shirkers, not victims of cyclical economic fluctuations.

According to EC rules, cyclical adjustment involves calculation of what the fiscal balance would be at any movement if the economy under inspection were at maximum employment. For example, in 2010 the Italian unemployment rate was 8.9% of the active labor force, and the overall fiscal balance was minus 4.9% of GDP. Calculation of the "structural deficit" requires estimating what the balance would have been had the Italian economy generated enough output to provide jobs for all seeking work.

The numerical answer to this hypothetical calculation turns out to be minus 2.2% of GDP (the most user-friendly place to find these numbers is not the EU source, eurostat, but the OECD). This -2.2% may look good to the uninitiated if for no others reason than it is below the Maastricht Convergence Criterion of -3% (see link above). Not so fast, because the Fiscal Pact sets a different rule for "structural deficits", namely -0.5% (if you have trouble following all of this don't worry, because confusing the layperson is part of the exercise).

The central message of this long and tedious story is that in 2010 the fiscal rules of the EU required the Italian government to implement expenditure cuts and tax increases to bring its "structural deficit" down to -0.5 from -2.2 (if you really want it tedious have a look at the "explanation" in 24 Ore).

I keep placing quotation marks around structural deficit because it is not merely hypothetical, it is hyper-nonsensical. This measure is in practice the ideological cover for requiring EU governments to implement the bad economics of continuously seeking a zero fiscal balance ("balanced budgets").

The flagrantly ideological nature of "structural deficits" results from its three basic flaws: 1) arbitrariness in defining what are one-off and temporary measures in the calculation, 2) subjectivity in calculating the counterfactual maximum employment, and 3) irrelevance of the calculation even if solutions were found for the other two flaws. I have explained the first, so I go straight to the second.

After subtracting these two components, the difference between the observed level of employment and maximum employment is by definition cyclical unemployment (all three defined here). An accurate and non-ideological measure of this employment gap is impossible.

Perhaps the most obvious problem is measuring the number of people available for and willing to take jobs were more work available at prevailing pay levels. The EC statisticians avoid this problem by invoking the ideologically laden "natural rate of unemployment", whose political bias is signaled by the word "natural" and by its other moniker, "Non Accelerating Inflation Rate of Unemployment" (NAIRU).

For the European Commission a member economy has exceeded maximum employment if the inflation rate is not stable -- and stable at or below 2%, the Maastricht Criterion. A visit to the website of the European Central Bankhttps://www.ecb.europa.eu/mopo/strategy/pricestab/html/index.en.html leads to the discovery that the ECB views this rate as equivalent to no change in the price level (the 2.5% does not incorporate adjustments for quality improvement and introduction of new products). To put the matter simply, any price increases in excess 2% tells the EC that a member country has reached maximum employment no matter what the measured unemployment rate might be.

Reaching the elusive goal of the "structural deficit" requires 1) accepting the dubious and inherently flawed measure of maximum employment, 2) converting that measure into maximum GDP, 3) estimating the public revenue that the tax structure would generate at that hypothetical GDP, and 4) estimating the public expenditure for that same GDP level.

To pretend that these calculations would be accurate to one-tenth of a percentage point as implied by a deficit target of -0.5% is so obviously absurd that it borders on mendacity. The Italian government should object to the Commission's invoking of the faux structural deficit. The objection should not be to how it is measured but to the ideological concept itself.

The Commission's view of fiscal deficits -- informed if not dictated by the German central bank (Deustche Bundes Bank) -- might be viewed as a superficially respectable version of the Republican Party's lust for expending cuts. But it is still the same troglodyte economics.