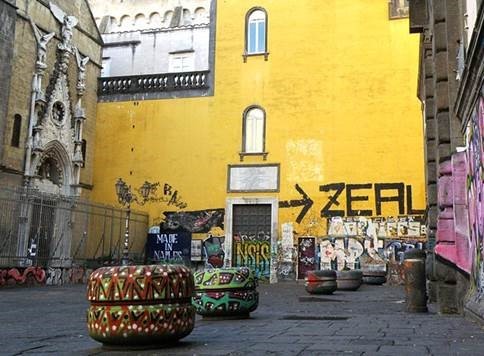 "The word for a scraping in Italian is graffito," explained our guide. "Here at Pompeii," he continued, "on the facades of the buildings and the columns of the forum, you see remains of scrapings made by the ancient Romans who lived here."

As he explained the origin of the word "graffiti" to our group, the guide pointed to two examples, one red, the other yellow, still clear, bright, and complete, "scraped" some 2,000 years ago on the front of what was then the home of one of Pompeii's wealthiest residents.

"Those could have been the names of candidates in an upcoming election," the guide suggested.

The people of Pompeii also scraped, on the outsides of their structures, word of events taking place in the marketplace and general alerts for the citizenry. We saw vestiges of these advertisements and notifications all over the ruined city. They were written carefully, artistically.

Graffiti is part of Italy's cultural heritage and evident today in every Italian city. Hardly an exterior surface in Naples, for example, where we enjoyed dinner following our day out at the ruins, is un-scraped. The effect, though, is not nearly as charming as that of the ancient scrapings at Pompeii.

I found little I'd qualify as charming in Naples. This is a crowded, dirty, polluted, noisy, smelly city where life is lived in the streets and in your face. Take care crossing the street and keep your wits about you. The drivers won't slow down to avoid colliding with you, and the pickpockets are well practiced at identifying distracted tourists. 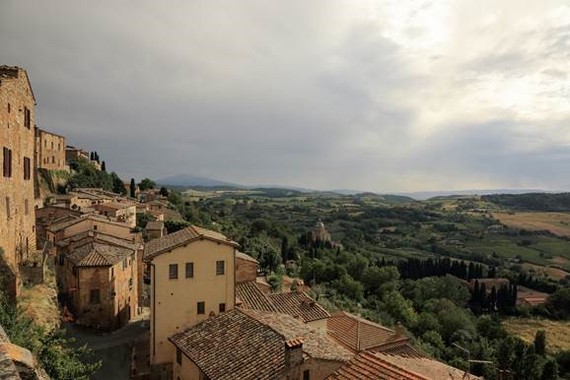 In other words, I wouldn't recommend Naples as a place to hang out. Tuscany, on the other hand, is a dream for many. After Naples, that was our next stop. Driving through the hills in the direction of Florence, we passed olive, cypress, and pine trees, mature vineyards, fields of sunflowers, and classic Tuscan-style, ochre-colored homes. Quintessential Tuscany...for many, the definition of beautiful countryside. And I'm not saying it's not.

But I'll take the French countryside any day. It's the architecture, I realized this visit, and the palette. The buildings of Tuscany are square and indelicate, and the color schemes, both of the structures, which are all brown and terracotta, and of the gardens, which are simply green, are limited.

"Italian gardens feature shrubs and hedges," a resident of Florence explained to us over lunch. "They can be elaborate and complex, but they are all about plants and trees. It was the French and the British who added flowers to their gardens," our new friend continued. 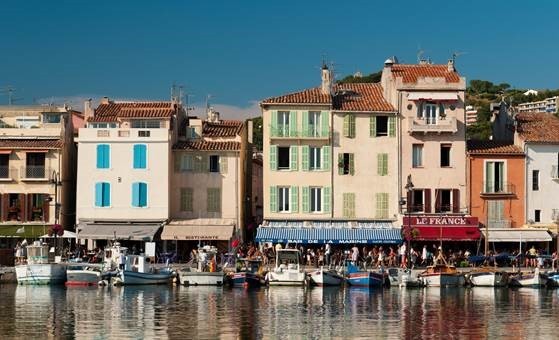 From Tuscany, we continued on to Provence.

I wondered in Greece on a recent visit what became of the fathers of classic architecture. They built ancient Athens and then seemed to disappear from the Grecian landscape. I'd say they all relocated to France.

In 600 BC, the Greeks founded Marseilles, the oldest city in France and one of the oldest in Europe. By the 1800s, Marseilles was the leading resort destination along this coast. Today it's a busy, lively, bustling, and tidy port town that glistens white in the summer sun. No graffiti here.

Over the centuries, the French added flowers to the gardens and, we observed, balconies of ornately wrought iron to the buildings. The overall effect is inviting, welcoming, and engaging; the picture from afar clean, calming, colorful.

"I'll tell you one thing I definitely prefer in Italy," my husband remarked when the bill arrived for lunch in Marseilles. "The prices."

No question, France is more expensive than Italy. Italy could be the cheapest destination in Western Europe right now.

Something else that's arguably better in Italy than in France is the olive oil, a thing that folks in this part of the world take seriously.

"Tuscany is home to the best extra virgin olive oil in the world," our guide in Florence told us with confidence. "If anyone anywhere else tells you theirs is better, they're lying."

Olives in Tuscany are hand-picked and then crushed all on the same day. In other parts of Italy, they shake the olives from the trees, then let them sit for weeks, sometimes, before pressing.