As the Northeast continues to freeze under snowy, stormy, and blustery conditions, the tourism bureau of Ithaca, New York, has conceded defeat, urging potential visitors to go to Florida instead.

VisitIthaca.com, the tourism website run by the Ithaca Convention & Visitors Bureau, recently added a pop-up window to its site, telling visitors that “due to this ridiculously stupid weather,” they should consider foregoing a trip to Ithaca, where sub-zero temperatures are expected this week. Instead, the website urges, go to the Florida Keys. 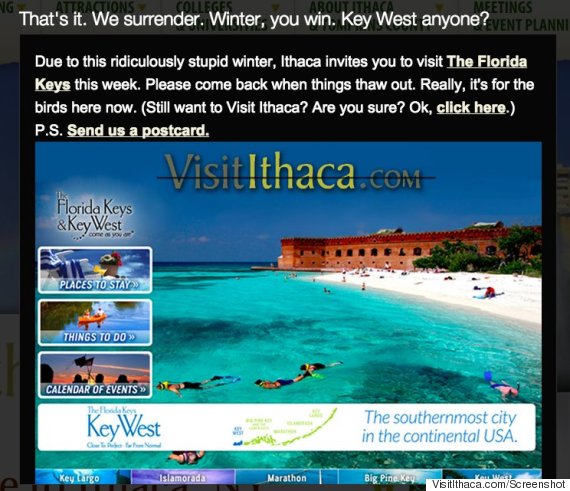 "On behalf of 100 million Northeasterners, we're saying that we're done with cold and snow," Bruce Stoff, director of the Ithaca Convention & Visitors Bureau, told the Ithaca Journal of the warm weather message. "This is a way for us to stay engaged with our customers at a time when Upstate New York isn't exactly top of mind."

On its part, the Florida Keys homepage told CNN that it had nothing to do with the pro-Florida message. A spokesperson for the Florida Keys Tourism Council called it “the wackiest thing I’ve ever seen in my life.”

Well, there goes my job. MT @CNNBrian: Due to cold weather, @VisitIthaca is encouraging people to visit Keys instead. pic.twitter.com/xTviCzf08W