You booked a flight to London from your local airport with a stop at New York-JFK along the way. Both hops have the same flight number, so it must be a "direct" flight - meaning it's the same plane all the way, even though it stops once. Right? Not necessarily. Read the small print. It could be what the airlines call a "change of gauge" - meaning at that stop you'll have to get off one plane and on another one. 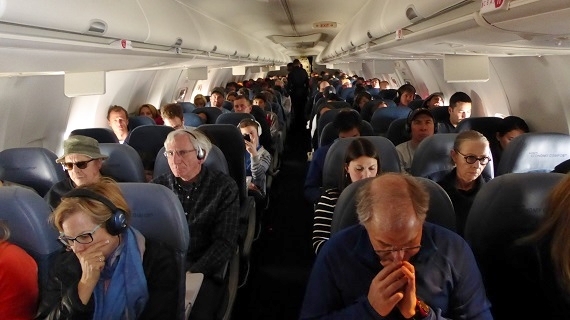 So what does "change of gauge" mean? Would you believe the term dates back to railroad lingo used in the 1930s, when the inside edges of most of the world's tracks were "standard gauge" (4 ft., 8-1/2 in. apart). If that's hard to digest, you should know the "standard" size most likely came from the width of horse-drawn coal wagons in northern England. Having the wagon and railroad widths the same size made it simpler to transfer coal shipments from one transport mode to another.

Sometimes, though, the railroads used "narrow gauge" tracks, such as in the mountains where it was a lot cheaper to cut narrower pathways. The only problem was, to use different track widths everything usually had to be unloaded from one train to the other where they joined up.

Fast-forward to today, and that's the same idea behind change-of-gauge hookups between jet flights. Let's say the first leg of your trip - from your local airport to JFK - is popular among travelers to London, but there's not enough of them to make a widebody jet pay off on that segment. No problem. Just put a narrowbody jet, like a 140-passenger Airbus A-320, on the first leg, and at JFK fill up a Boeing 767 widebody - with the same flight number - carrying 200-plus passengers for the hop to London.

Of course everyone on the Airbus flight has to get off the plane at JFK. Then the London-bound passengers board the Boeing widebody while other passengers go their way.

Wouldn't it be simpler to just use different flight numbers for the two segments? Aha, there's the rub. Because then you'd create "connecting" flights, and you'd have a tough time finding them in the travel industry's computer reservations systems (which show nonstop and direct flights first, then connecting flights later on with all the flotsam and jetsam).

Are change-of-gauge practices legit? Yes, as long as the travel agent or airline tells the passenger to expect a change of planes along the way. Actually, Title 14 of Code of Federal Regulations, Chapter II, Subchapter A, Part 258 levies a hefty fine on travel agents, airlines and others in the travel business who fail to comply with the regs.

Stunning Images From Around The World
US Presidential Election 2020
Breaking news, analysis and the latest polls on the presidential race from HuffPost’s politics team
See More
Voting Made Easy
Register to vote and apply for an absentee ballot today
Register now
More:
New YorkCoal england airbus travel
Newsletter Sign Up
An essential daily guide to achieving the good life
Subscribe to our lifestyle email.
Successfully Subscribed!
Realness delivered to your inbox