It's a good time to be gay, unless you really love eating at Chick-fil-A, in which case it sucks to be gay, because, thanks to how they've chosen to spend their money, if you bite into one of their delicious sandwiches, you are supporting people who don't support you. As much as I love a good chicken nugget, I wouldn't dare go against my people. Ever heard of the gay mafia? Oh, it's real!

Sure, gay people still don't have the right to get married in most of the country, our rights are constantly being voted on, and discrimination is as rampant as ever, but we are making strides! For one, we are more visible than ever. More and more people are coming out of the closet, living openly gay lives and in turn showing friends, family and neighbors that who they are is really not that different from everybody else. Even Anderson Cooper started openly waving his rainbow flag! Well, not literally waving it, but you know what I mean! The point is, he's gay, and the world now officially knows it! Does it make a difference? Shoot yeah it does! Not only does it encourage other gay people to be proud of who they are, but it also helps my mom get past her unrealistic expectation that she and Anderson would one day end up together. Sorry, Mom.

In general, the entertainment world has been much gay-friendlier than before. With Will & Grace having paved the way, we now have two new network sitcoms that focus on gay couples: The New Normal and Partners. Glee, Grey's Anatomy, and a number of other shows have all featured prominent gay characters. Chaz Bono, who recently transitioned, danced with a woman on Dancing with the Stars. Ellen DeGeneres remains the most popular daytime talk show host in the world. And Adam Lambert is, well, as gay as ever, and even if you don't like how much makeup he wears, it's hard to deny that he sure can sing!

This past year has also brought some rather big historical moments for the gay community. We had the repeal of "don't ask, don't tell." In case you didn't know, that's huge! President Obama became the first U.S. president to announce his support of same-sex marriage. And one of the biggest rappers in the world, Jay-Z, said he's got 99 problems and the gays ain't one! Well, that wasn't his official statement. I'm merely paraphrasing.

These may not sound like big changes to some, but considering the uphill battle we've been fighting, any progress is surely welcomed. As a stand-up comedian, I certainly appreciate the more tolerant attitudes. When I first started comedy eight years ago, nothing was scarier than going into comedy clubs across the country not knowing if people were going to jump me after my show because I'd told a joke about having feelings for my best friend in college. Now I walk in the clubs, sweater vest and all, and don't think twice about how my sexuality will be perceived. Part of that has to do with people being more open-minded, but it certainly doesn't hurt that my boss, Chelsea Handler, is one of the biggest gay advocates there is, and if she deems it OK, then most of her fans follow suit.

Although I couldn't be more thrilled with these changes, there is still a lot that needs to be accomplished, of course. People need to keep feeling safe enough to come out of the closet. Laws need to continue to be changed. Minds need to continue to be opened. Rights need to increase. Homophobia needs to decrease. And no one should feel complacent with the way things are. Our work isn't finished until being gay is considered as natural as the color of people's skin. Well, unless your skin looks like Snooki's! That's not exactly natural.

As for myself, I'm going to stick to what I know best: comedy. I may not be saving lives or changing the world, but if I can get one person to think differently about gay people because I made them laugh, then I will have succeeded. I'll also hopefully have one more follower on Twitter, because in the end, that's what really matters! 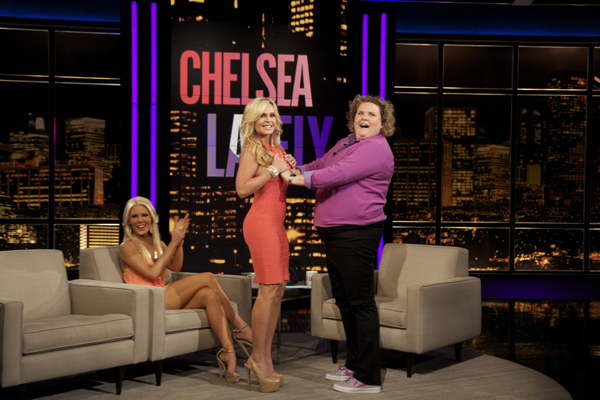 Join Fortune, Chelsea and the gang when Chelsea Lately debuts from Stage 1 at Universal Studios Monday, Oct. 15, at 11 p.m. ET/PT only on E! For more information on Fortune and her upcoming shows, check out fortunefeimster.com.