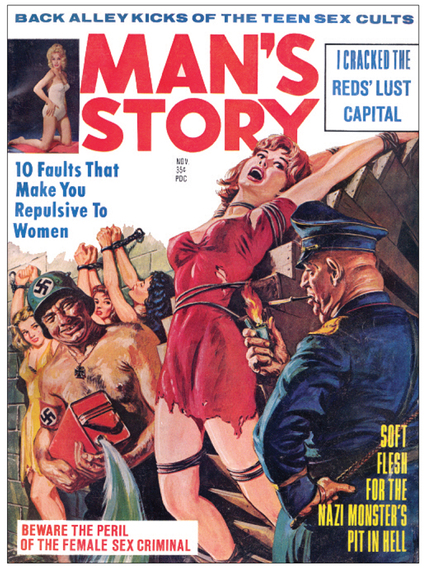 A couple of weeks ago I was in a movie theater watching Mad Max: Fury Road in 3D. While watching actor Tom Hardy grunt single lines of manly "dialogue" amidst high-octane explosions, I remembered my copy of It's a Man's World sitting in my office. It became clear during the film that the road to the contemporary action movie has its roots in the pages of the 1950s and 1960s "men's adventure pulps" or the term I prefer: "armpit slicks."

The heteronormative confusion in contemporary American male identity is found all throughout the pages of defunct genre magazines such as Man's World, Sir!, Real For Men, Real War, Man's Life, Man's Action, Man's Time, Man's Thrills, Action For Men, All Man, Action Life, His World, Fury, Guy, Men Today, All Man, Man's Daring, Man's Adventure, Real Men, Man's Story, Stag, For Men Only, Man to Man, American Manhood, and countless other extinct titles. I find that that the current cultural value in these magazines is that the cover illustrations are so beautifully drawn and painted that it subverts the overtly macho context into a kind of kitsch.

We tend to think of the Eisenhower postwar era as an innocent time in American culture. As the conservative 1950s turned into the swinging 1960s, men's adventure magazines were a haven for the male fantasy. The struggle for male identity has its roots in postwar economics. We were still a young country in the 1950s and '60s ,and these magazines captured the imagination of boys and young men flexing before our collective self-image as the winners over the evil Axis Powers. I particularly like this quote by illustrator Norman Saunders' son David Saunders, in which he recalls something his father told him regarding the magazine's readership:

Dad told me that he felt adventure magazines were towards men who had served in the war but had seen no action, which describes 85 percent of our 16 million servicemen. He felt that men who saw action never wanted to think about it again while most servicemen who never reached a front line were doomed to a life of wondering about their manhood in the face of battle.

The illustrations are so incredible throughout It's A Man's World that as you pour over every line of detail you can't help but think about the loss of craftsmanship that is rapidly making high quality draftsmanship so rare to find in a publishing world that has wholeheartedly accepted photography's immediate gratification. It's arguable that the technical sophistication of the draftsmanship in these rags either adds to the absurdity or idealizes the ideas about masculinity that these magazines were trafficking in.

Each page in this collection is a study in classic fine art illustration. Illustrators such as Mort Künstler, Norman Saunders, Clarence Dore, George Mayers, George Gross, John Styga, Joe Little, Walter Popp, James Bama, Norm Eastman and the countless others both credited and uncredited. These artists were able to harness the high art aspirations of American realism and to apply it to what was considered low culture values at the time. It's this balance between the low and the high where we often arrive at the notion of "camp."

Norm Eastman's exquisitely illustrated cover of It's a Man's World Expanded Edition, which was edited by Adam Parfrey for his luminous Feral House imprint, has the kind of cover that would be irresistible to a 14-year-old boy of any age. 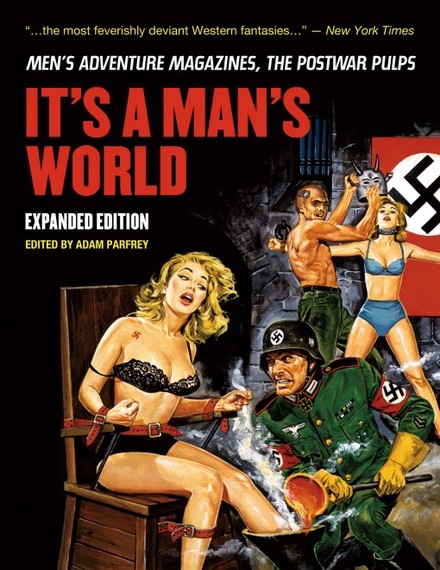 Cover illustration for It's a Man's World by Norm Eastman, originally printed as the cover of Man's Epic, August 1964.

The cover of this book features two beautiful women, both tied up and being tortured by Nazis. The blonde pinup in the foreground appears to be strapped to a chair in her provocative undergarments. A swastika is painted in red above her right breast. Most prominently there is an enthusiastic Nazi kneeling at the floor of her chair pouring boiling lava or some other unbearably looking hot substance into a pot, in which her leg is submerged. In the background, we see a woman in a seductive blue bikini tied to a rack while there is a second, more deranged-looking Nazi forcibly fitting her with a metal-faced mask. A giant swastika flag hangs behind the bikini girl who is about to be crucified against some sort of rack contraption. The image is sexist, misogynistic, cruel, potentially pro-Nazi, and I love it. Why does this blonde look so sexy as she is about to be tortured? Some of us aren't looking for morality in art. Perhaps for some of us, art is more satisfying when it transgresses morals. It feels good to cross the line and to be unapologetic about it.

This volume has several well-written chapters that go into great depth concerning the controversial content within its cultural context of that time. Many of the essays and interviews with the creators of these magazines shed some light on what the editorial staff was thinking about its audience.

It was not just the illustrations that made these rags so compelling, the writing was also a form of craftsmanship I knew little about. There is a wonderful interview with The Godfather author Mario Puzo talking about writing 60-page book bonuses on the weekends, writing the Godfather, three stories a month, book reviews for the New York Times, Book World, Time, a children's book, as well as publishing other articles, "all at one time, I had four years where I must have knocked out millions of words." 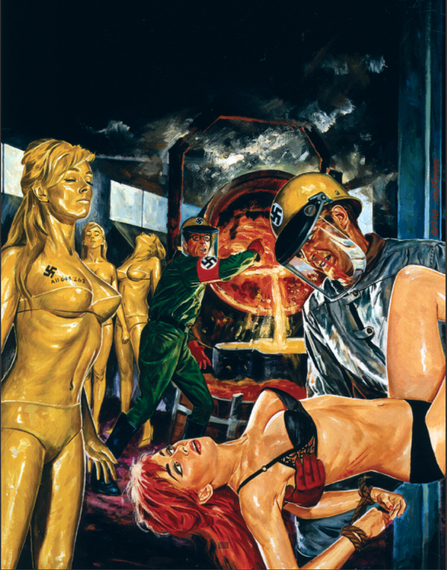 It appears that the technology for men's storytelling myths transitioned from publishing to digitally manipulated film, but the story remains the same. Real men are good guys that fight "bad guys" like Nazis or (erroneously) Indians. Real men don't talk much, yet real men can transgress into bad guys in surprise plot developments as in the wonderful detective novels of Mickey Spillane.

Without irony the titles of these magazines suggest that manhood is a quantifiable measure on how much testosterone the male can produce. What makes these illustrations so great is that for the entire knuckle-dragging macho bullshit, we end up with one of the finest books of magazine illustration produced.

As I type this, my four-year-old son is in the next room playing with little men. The search for male identity is alive and well in 2015.

PS: Any museum curators reading this: please do the right thing and put together a retrospective. At one point, Mort Künstler claims to have a treasure trove containing hundreds of his paintings collecting dust in his attic! Use your power for good! Feel free to contact me so I can set you up with the right people! (restraining.order.ltd@gmail.com)