When I was a kid one of my most profound pleasures came in the form of breaking out the rusty old avocado-green handled can opener from the kitchen drawer and cracking into a can of Loma Linda brand Nuteena. I can still picture it. Frankly I can still smell it.

I can already see the raised eyebrows of readers in my mind's eye.

Nuteena, for the uninitiated, was a peanut-based loaf marketed by the Loma Linda brand of foods as a shelf-stable meat alternative from the 1960s until 2005 when it was discontinued for reasons that remain an enduring mystery, on par with the disappearance of Amelia Earhart, to its fans. The end of the Nuteena era brought sadness, despair and existential ennui to the devotees of the product that I am not sure even Jean-Paul Sartre could verbalize. Nuteena is so missed and so beloved that over a decade later the extinct product has its own hashtag (#nuteena) on Twitter and its own Facebook page. 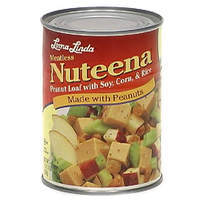 Recently, I wrote an article on the Seventh-day Adventist Church and its involvement in the development of the meat analogue industry. Nuteena was one of the many products, along with Wham, Tuno, FriChick and Big Franks that were marketed to Seventh-day Adventists (who are typically culturally vegetarian) and vegetarians and vegans as a whole from the late 19th century onward. Nuteena was a staple in the diets of Adventists across the country. In my family it was an ever present item in the pantry and was frequently served as a sandwich spread with lettuce and tomato or by the slice garnished with Heinz beans.

When the article posted online I received a slew of emails from people who remembered Nuteena and lamented its loss. Some people wrote to remind me that the prophetess of the church herself, Mrs. Ellen G. White, was known to make a Nuteena-esque product in her kitchen on her Elmshaven estate. Others wrote to tell me about how they simply could not embark on a camping trip with their family without a station wagon backseat filled with cans of it. Yet, the most touching emails came from those who wrote wistfully about the fact that they no longer could enjoy the simple pleasures of opening that can of Nuteena and watching the loaf slide out of the tin cylinder with a flatulent like sound and then wriggle on to the plate awaiting it below where they could slice into it along the ridges left by the can (much like we do every year with the cranberry sauce from the can on Thanksgiving).

While I cannot bring the canned product back to you (would that I could though, would that I could) I can share with you the gem that was shared with me by the head elder of the church I grew up attending, one Mr. Bill Aumack. 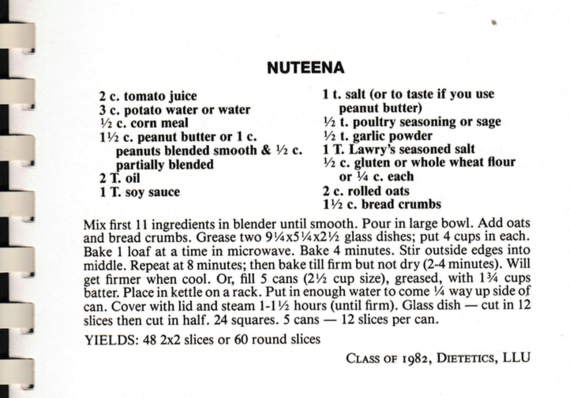 Bill had in his possession a vintage copy of the Apple a Day Cookbook, Volume II, a Seventh-day Adventist cookbook, that featured a recipe for a Nuteena copy cat you could make at home. So without further ado...I give you Nuteena from scratch.

2 cups of tomato juice
2 cups of potato water or plain water
½ cup of corn meal
1 ½ cups of peanut butter or 1 cup of peanuts blended smooth & ½ cup partially blended (this is just a matter of textural preference)
2 tablespoons of oil
1 tablespoon of soy sauce
1 teaspoon of salt (optional...depending on your love of salt)
½ teaspoon of poultry seasoning or sage
½ teaspoon of garlic powder
1 tablespoon of Lawry's seasoned salt
½ cup of gluten or whole wheat flour (or ¼ cup of each)
2 cups of rolled oats
1 ½ cups of bread crumbs

Mix the first eleven ingredients in a blender until the consistency is smooth and then pour it into a large bowl. Add oats and bread crumbs. Next, grease two 9 ¼ x 5 ½ x 2 ½ glass dishes. Put 4 cups of the mixture into each of the greased glass casserole dishes. Bake one loaf at a time in the microwave for 4 minutes. Stir the outside edges into the middle. Put them back in the microwave (one at a time) and then repeat the process of stirring. Bake the mixture until it is firm but not dry. The original cookbook suggests another 2 to 4 minutes but it really depends on the efficacy of your modern microwave. Remember that this recipe was written in 1982. Just know that it will get firmer still when it cools. Think of room temperature peanut butter versus peanut butter spread across hot toast.

Another option is that you can take five tin cans (2 ½ cup sized ones), greased, with 1 ¾ cups of batter in each and place them in a deep pan that you then fill with water. Place the casserole pan on a rack in the oven. Put in enough water to come ¼ way up the side of the can. Then cover the dish and steam for 1 to 1 ½ hours or until the mixture is firm.

If you went with the glass casserole dish method (which I recommend...though you will lose out on the cool ridged loaf textural effect) cut the loaf into slices and serve! If you slice up the loaf in the can you can probably get 12 slices per can so go ahead and invite over 60 of your friends for a Nuteena tasting. Or be a glutton and eat all 60 servings. I am not here to judge.

Now go ahead and enjoy... 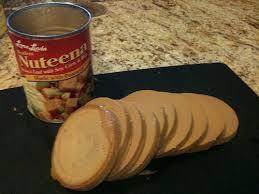