Since Pres. Obama took office he's been moving the Democratic Party rightward. With the completion of the midterms and the Tea Party House ensconced along with Speaker Boehner, he not only succeeded in getting the voters to move that way, too, but now he's actually got a Congress that fits his core more closely. 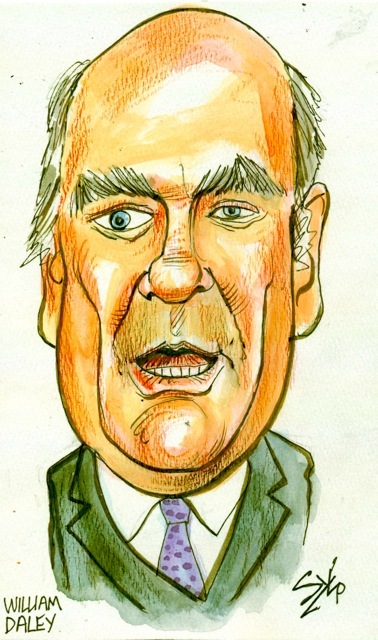 "Daley added, "All that is required for the Democratic Party to recover its political footing is to acknowledge that the agenda of the party's most liberal supporters has not won the support of a majority of Americans -- and, based on that recognition, to steer a more moderate course on the key issues of the day, from health care to the economy to the environment to Afghanistan."

Daley is not a liberal. He joined the board of Third Way, a think tank staffed by ex-Clintonites, last year, saying at the time that "advancing moderate ideas, challenging orthodoxies, and building a big tent political movement that can attract an enduring majority. Their views are right for both campaigning and governing: pro-market, strong on security, and seeking common ground on culture issues."

Barack Obama, we all know by now, is not an ideologue. But where his roots are planted is also nowhere near the progressive pendulum, particularly on domestic issues.

Now he's got a playing field that suits his natural political conservatism.

New House Speaker John Boehner acquitted himself tremendously yesterday, giving a speech that represented a very long road to where he now finds himself in his dream job. There was the thread of sweat and humiliation in his scripted humility, which comes after many years of effort to no avail until now. The new Speaker wants to succeed and time will only tell if the person that showed up today stays around long enough to outwit Obama by herding the rabble at his gate. Of course I'm talking about the Tea Party Caucus, who is ready to tear down "Obamacare" and, when they fail at that, defund it, sending the message in the process that the only other remedy is a new president, all of which is Boehner's hope, too. It's all by design.

Pres. Obama gets that, so his current state of mind revolves around Operation Reelect, which Robert Gibbs leaving to help in that effort begins.

Foreshadowing of Obama 2.0 to come, the White House shift starts with an address to the Chamber of Commerce next month, which I doubt will please progressives.

Next comes Gene Sperling, who is also likely to take Summers' spot, with anyone better than Summers.

There is not a smarter move for Obama than Daley, because it allows a reset, which also sends a signal to business who loves the guy, which coupled with the President's speech to the Chamber sends an undeniable message. That Daley comes from Wall Street, with deep roots in Chicago, continues the reelect thread.

Obama's trying to reach out to his base, which is now Independents, the people to whom he'll be speaking for a very long time. The conservative, Third Way choice of William Daley will help facilitate this action.

Dealing with conservatives and finding compromise with them in order to woo Independents is a whole lot easier than having a majority Democratic Congress who expects you to make progressive moves on policy. That's never been who Barack Obama is, and anyone who thought otherwise just wasn't paying attention.