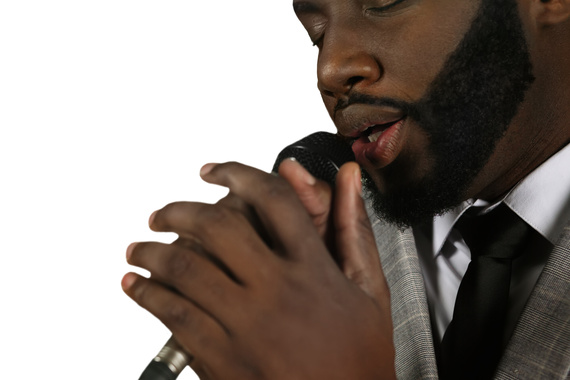 The Power of the Male Voice

Meghan Trainor's hit song, All About That Bass is a popular tune that was released in June 2014 by Epic Records. Recently I was listening to the intriguing melody, and I had a flashback to my step-father's commanding voice that could stop you on a dime when you were headed in the wrong direction. I queried a diverse group of my friends, and they all had similar memories if they were raised with a strong male figure in their home. Your mother could tell you to do something 100 times, but you knew she meant business when she said, "Wait until your dad gets home." You would literally tremble in your tennis shoes and immediately beg for forgiveness.

There is something about that "bass" in a man's voice that commands your attention. I remember the rich, soothing voice of Barry White as he crooned and made millions of women swoon when he opened his mouth to sing. Let's face it fellows you have a powerful weapon when you want to romance a woman and bring her to her knees---your vocal cords. As a teenager, one of my suitors decided that he would use poetry to put an end to my resistance. I fell like a deck of cards at a Las Vegas casino.

History records several vocal fatal attractions that have caused a leap towards compromise in otherwise sensible women. Let's take a step back in time and name a few:

Sidney Poitier--- Knight Commander of the Order of the British Empire (has a commanding voice to match this prestigious title).
Isaac Hayes---The Black Moses, who saved your heart and corrupted your soul with his irresistible ballads.
Marvin Gaye---The Prince of Soul's melodic renditions of love ballads, not only drew you to the dance floor but put you in the mood for much more than a slow dance.
Teddy Pendergrass--- Teddy Bear, had a voice that did a Love TKO on your heart every time you heard it.

Even modern day leading men have the power to bring women to their knees. Here are a few that made my list, Leading Men with The Voice.

James Earl Jones---For years he mystified movie viewers with his commanding voice in Star Wars as Darth Vader. Remember fellows; there are some girls out there who can't resist a bad guy with charm and a voice to match. That's how Luke Skywalker became a reality.
Morgan Freeman---Even though he's played God three times in his acting career, he still can stop a woman in her tracks when he says her name.
Samuel L. Jackson--- The Sam King of Cool, Mr. Cool. (Some men in their demeanor epitomize the essence of a word and Mr. Jackson's picture should be beside the word "cool" in the dictionary because his voice is as smooth as ice!

When Trainor wrote this song, she probably didn't mean to reference a male voice. I'm sure her intention was quite the opposite. I think she was actually talking about a part of the female anatomy that will remain unmentioned in this blog. Yet, I just couldn't pass by the opportunity to discuss the similarity between the power of the bass in a man's voice and its influence on women over the ages. You fellows from foreign countries (Idris Elba) know exactly what I'm talking about... A guy with a foreign accent is just like a man in uniform, the mystery of the man causes women with hearts of stone to let down their guards for an adventure. Well, that's another blog for another time. Remember fellows you've got the power of "The Voice," use it wisely!

Sharon C. Jenkins is a serial "authorpreneur" and a consummate entrepreneur. Her main mission in life is to help authors and small businesses increase their "brandwidth" and to successfully pursue their passion for writing excellence. She is the Inspirational Principal for The Master Communicator's Writing Services. Her writing services and books are tools that assist others in realizing their literary dreams and achieve excellence in their business. She has two great loves in her life: writing and helping others.