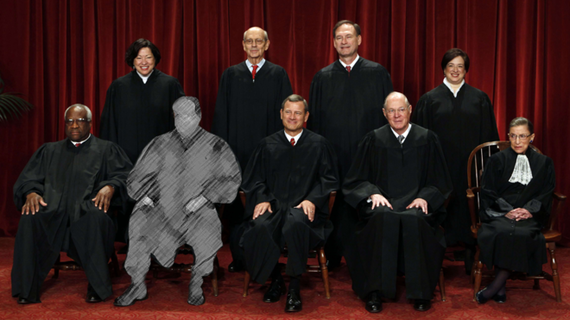 For this unenthusiastic Clinton voter--and I'm sure I'm not alone--there are two main reasons for voting for Hillary and urging others to do the same.

The first is too keep Donald Trump's tiny fingers away from the nuclear codes and to prevent a racist, misogynist, xenophobic, hateful, lying, and unhinged narcissist from becoming the leader of the" free world."

The second is the Supreme Court, and, in particular, appointing Justices who will help restore democracy and reduce political corruption by overturning Citizens United.

This election will determine the direction of the Supreme Court for a generation.

The Clinton campaign needs to make clear that the future of American democracy is at stake in deciding whether she or Trump will appoint the next Supreme Court Justices.

"Americans may be sharply divided on other issues, but they are united in their view of the 2010 Supreme Court ruling that unleashed a torrent of political spending: They hate it. In a new Bloomberg Politics national poll, 78 percent of those responding said the Citizens United ruling should be overturned, compared with 17 percent who called it a good decision."

So Hilary: In this campaign year when voters are rejecting a corrupt political elite, ally yourself with 78% of the voters and make appointing Supreme Court Justices who will overturn Citizens United a central part of your campaign.

Make it a major part of your stump speech. Bring it up in the debates. Run campaign ads that you'll appoint Supreme Court Justices who will overturn Citizens United while Trump will appoint justices who will uphold it and extend it further.

Trump is already running hard on who gets to appoint Supreme Court justices, focusing on the false claim that Hillary will appoint Justices determined to overturn the 5-4 Heller decision in 2008 holding that the Second Amendment protects individuals' right to keep and bear arms (while allowing for a variety of gun control regulations like banning firearm possession by felons and the mentally ill and imposing conditions on the commercial sale of firearms.) (For the record, I personally disagree with the Heller majority--Whatever happened to a "well-regulated militia"?--But that's politically irrelevant since, despite NRA lies, there's no chance in the foreseeable future that the government will try to confiscate the over 300 million guns owned by Americans.)

Hillary must vigorously rebut this distortion on the 2nd Amendment by making clear she has no intention of appointing Justices to overturn Heller, while also supporting common sense gun regulations (backed by a majority of voters but opposed by the NRA) like keeping guns out of the hands of potential terrorists and the mentally ill.

But having swatted away Trump's 2nd Amendment lies, Hilary should campaign loudly and proudly on appointing Justices who will overturn Citizens United.

In other words, make clear that a Trump victory likely means that American democracy is screwed for a generation. A Trump Supreme Court would guarantee that the oligarchy keeps increasing its power indefinitely.

Combined with Trump's unhinged character, that's reason enough to vote for Clinton over Trump, whatever other reservations you may or may not have about her.