So we're all sitting in near-total darkness in this huge upstairs room in an authentic 19th-century Wild West clubhouse. On the floor in the middle of our circle, way beyond anyone's reach, rests a flashlight, switched off.

"Show yourself," coaxes the ghost-hunter who brought us here. She is addressing whichever of this building's many alleged spirits might be listening. "Switch on that flashlight."

"Pleeease," the ghost-hunter exhorts in a caramel-syrup voice. "I know it's really hard for you, but if you could switch on that flashlight, we'd all be really, really impressed."

A heartbeat. Then click. The flashlight blinks on. Grown men scream.

The trouble with believing in ghosts is not the chance that you might see one eating Cheese Nips on the sofa.

The trouble with believing in ghosts is finding anyone to tell about it who won't laugh or ask how much Jägermeister you chugged first. 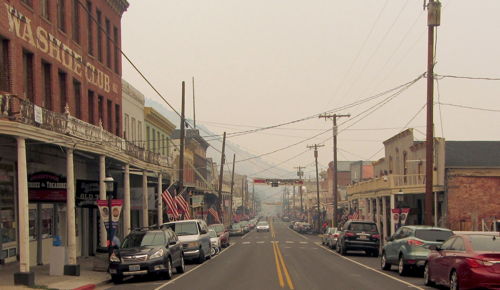 You won't have that trouble in Virginia City, Nevada, a perfectly preserved boomtown -- population 15,000 in 1870, only 850 now -- which the SyFy channel calls one of America's most haunted. Lining its wood-paneled sidewalks are allegedly haunted houses and professional ghost-hunters who roam those historic halls wielding electromagnetic-field meters, motion detectors, electronic-voice-phenomenon recorders and wire dowsing rods. In Virginia City, it's always Halloween. 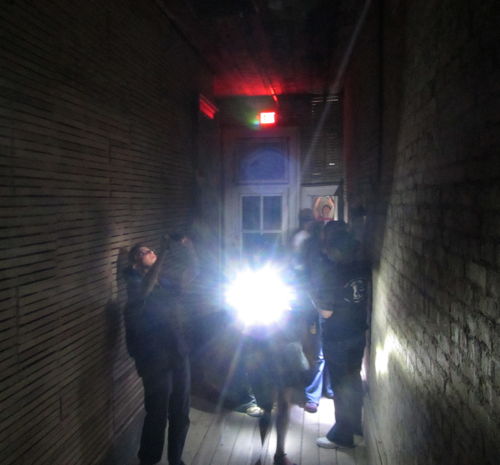 We who believe in ghosts are a misunderstood minority, dismissed by your urban intellectual crowd as Blair Witch Project-believing hicks. (I hate that film. Ghostbusters too, and Poltergeist and Paranormal Activity. The Ghost and Mrs. Muir, on the other hand....) We who believe in ghosts argue over what ghosts actually are. Shreds of emotion stuck in place, like scraps of Scotch tape? Cosmic film loops locked on "repeat"? Sentient spirits walking, talking, throwing candlesticks around because they know they're dead? Or because they don't?

If we are right and ghosts are real, then history does not race forward in one single straight-ahead past-present-future zipline but sometimes coils over itself or frays into filaments so that it really can be 2013 and 1869 simultaneously for one shuddery split-second, and nothing human -- no heartbreak, no hug, no round of golf -- is ever really lost.

Twenty-five miles from Reno, Virginia City boomed after the 1859 discovery of the Comstock Lode, which still reigns as the world's largest silver deposit. Miners, robbers and bankers chased shimmering dollar-sign dreams via horse and wagon over desert, forest and plain to dig and dance here and, well, die. 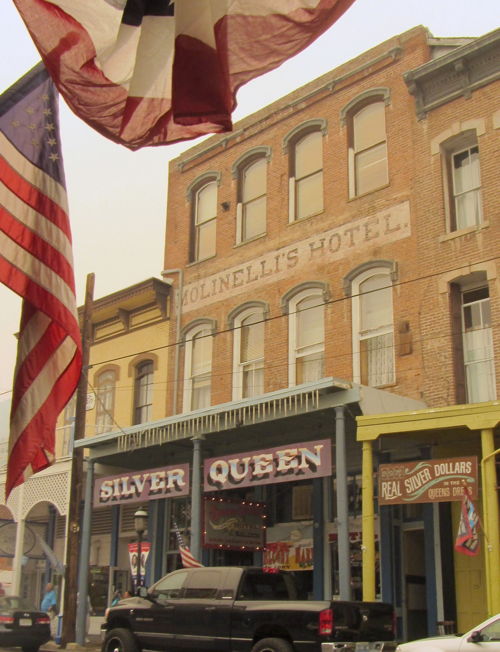 After checking into the quaint Silver Queen Hotel & Wedding Chapel, which is allegedly haunted by a woman who committed suicide after slaying her baby and is also where the Captain and Tennille renewed their marriage vows in 1995 -- a fact which is ghostly only in the most abstract sense -- we toured the Mackay Mansion, a silver magnate's well-appointed 1860 home in whose airy hallways and ornate parlor local psychic Janet Jones, author of Haunted Carson City, told us she regularly meets the spirits of a mild-mannered nanny, a man in a top hat, a shy boy named Tommy and a playful four-year-old named Emma whom Johnny Depp claimed to see while filming Dead Man here in 1995. 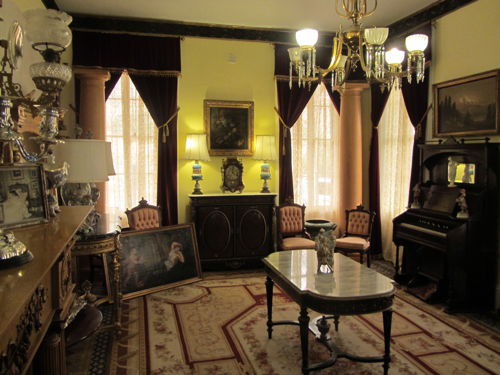 "I love this little girl dearly," beamed Jones, pointing around quaintly furnished rooms to regions of allegedly intense spirit activity, which she encouraged us to photograph in hopes of capturing the light-balls called "orbs" which are a controversial topic amongst us who believe in ghosts because some say orbs are spirits. Some say they're dust. Here is a digital photograph taken that day which contains orbs. You decide: 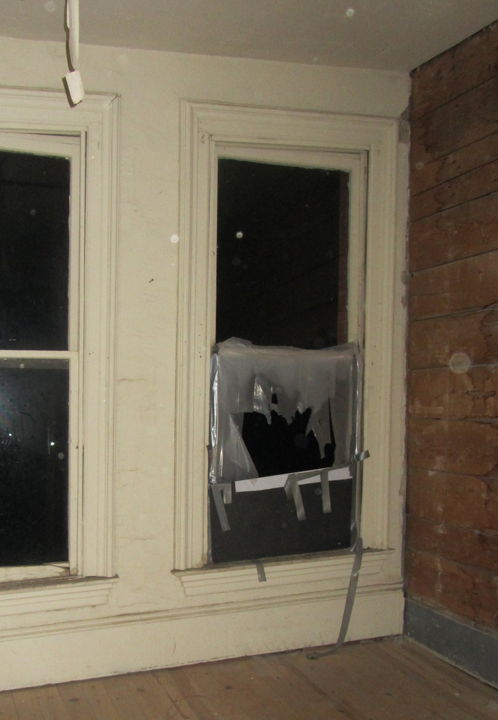 Next we toured the St. Mary's Art Center, a boomtown-era hospital turned gallery whose director Rita Wheeler wielded dowsing rods to commune with two small (dead) brothers and a (dead) adolescent girl who allegedly moves a corporeal red-clad doll around these former sickrooms with their poignant desert-graveyard vistas. 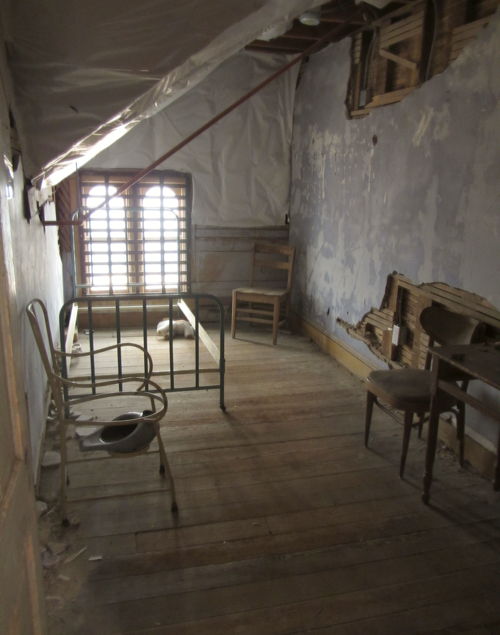 The roar and clatter of ethereal horse teams are allegedly heard here, too, "and we have a cowboy who walks up and down this hallway," Wheeler said. Howdy there, ectoplasmic pardner! 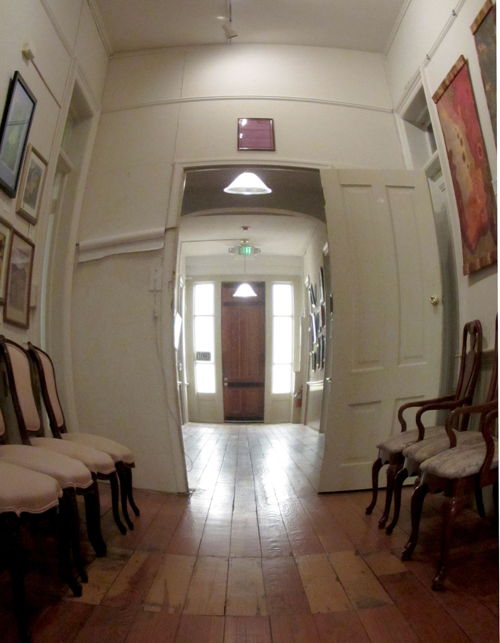 Lunch was at nearby Gold Hill, the restaurant in Nevada's oldest still-operating hotel, perched scenically if tragically atop the Yellowjacket Claim, a section of the Comstock Lode where dozens of miners died in a raging 1869 fire.

(This and our other meals -- vivid handcrafted enchiladas at friendly Café del Rio, daringly vanilla-chai-poached salmon at cutting-edge Core, buttery bearclaws at Virginia City Baked Goods -- proved beyond the shadow of a doubt that yes, gourmet food shines far from the big-city lights. This fare was easily on par with its San Francisco counterparts, but -- psst -- in portions twice as large.) 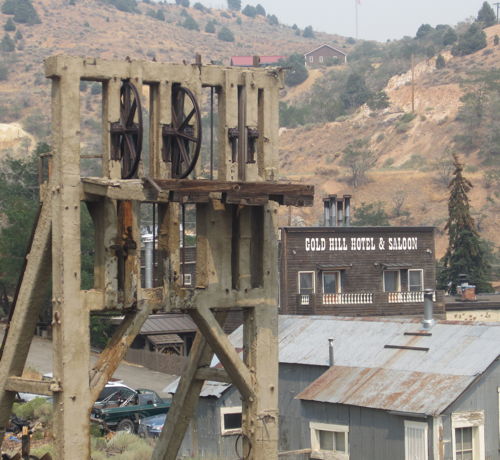 Gold Hill's executive chef Serge Marchale not only wields magically chewy ravioli and melt-in-your-mouth seabass. He also claims that the restaurant kitchen's paper-towel dispenser operates all by itself late at night.

"It's very strange," Nice-born Marchale told us over aromatic strawberry-sauced pistachio tiramisú layered with sumptuous house-made spongecake. "Once in a while you see something flying around in that kitchen -- like a bird or a shadow, but it's not. You really get goosebumps."

Alone one night in the dining room, Gold Hill's head waiter Victor Kangas saw a drinking-glass fly through the air to shatter against a wall. Real glass, ghostly tosser. Ex-boxer and Vietnam veteran Kangas, who does not scare easily, says he once saw a boy with a Buster Brown haircut loitering spectrally on the hotel's stairs.

Formerly a changing-station for miners, Gold Hill offers its guests handy ghost-hunting kits for a nominal charge. Alleged spirits in this rambling retreat include that of a woman, possibly an amateur perfumer, who exudes a rosy fragrance. True fact: I smelled rose cologne in a hallway.

Guests have reported hearing foosteps, slamming doors, giggling children and the sound of cards being shuffled. 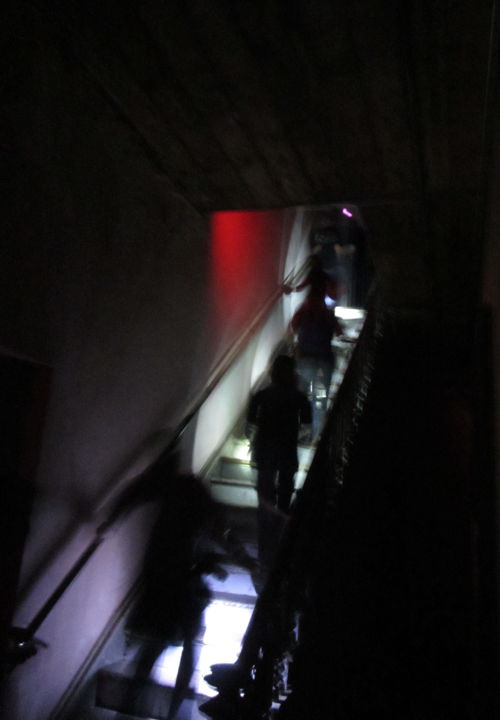 Featured on SyFy's Ghost Hunters and the Travel Channel's Ghost Adventures, Virginia City's once-lavish Washoe Club was a gambling-house for boomtown millionaires. Debbie Bender and other members of the Northern Nevada Ghost Hunters club led that night's six-hour investigation in what is now a huge spooky warren of empty rooms with tattered wallpaper and exposed beams. Members of our group felt faintly ill -- because the club's resident ghosts like to suck away visitors' energy, we were told -- and some of our cameras inexplicably malfunctioned. EVM meters and the ghost-hunting apps on some of our iPhones went wild, and some in our group said they saw unoccupied chairs moving all by themselves. 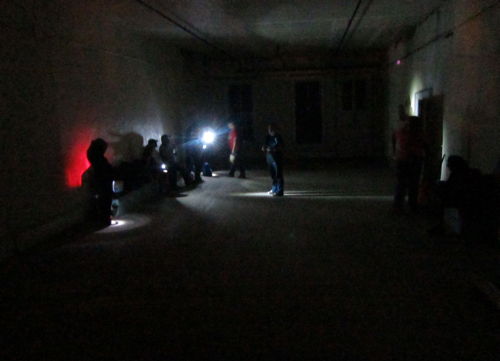 The next day we took a forty-mile detour to the Cal-Neva Resort near Incline Village, alongside Lake Tahoe, whose alleged spirits -- haunting guest-bungalows, the theater and a spooky span of underground tunnels -- include Frank Sinatra, Marilyn Monroe and a strangled cashier.

Back in Virginia City that night, we rejoined ghost-hunter Debbie Bender -- this time in the Knights of Pythias building, which is a former lodge hall currently unoccupied -- by the living, at least. There in the darkness that flashlight flicked on, then off.

"Thank you so much," Debbie said. To someone dead.