There's something quite unique about the way that Indonesia has developed over thousands of years. Measured by area, it is the world's largest archipelago. Within this huge stretch of Asia, there are more than 25,000 islands. Each is its own little pocket and the barriers of water between them have enabled cultures to grow independently from each other. Even plant and animals have been restricted from expansion by the natural borders.

It comes as no surprise then, that, despite the fact that Indonesia is the world's most populous Muslim country, there are islands which are predominantly Buddhist. The influence of European colonizers in recent centuries has also led to communities that identify as Christian. Indigenous tribes in some of the remote areas still worship the gods of their ancestors. All these different societies have emerged organically and there is no way to look at Indonesia as a single homogenous culture. It's part of the magic of the country.

Religion is just one example of the diversity that can be found in Indonesia. You can also see it in the food, in the architecture, in the performance arts, and in the natural wonders that abound. From the jungles on one island to the volcanoes on another; from the ancient temples to the modern royal homes; from the chaotic capital of Jakarta to isolated pristine beaches.

From a tourist's perspective, Indonesia offers a large variety of experiences across the archipelago. And - best of all - it's always summer. The heat rarely drops below 77℉ (25℃). And although the wet season hits the country between November and April, the rain is rarely strong enough to put off visitors who don't mind seeking refuge in a cafe or bar during an afternoon storm.

Most foreign visitors to Indonesia head straight for the popular island of Bali and don't leave it until it's time to head home. While Bali can be a beautiful and spiritual place, much of it is overdeveloped and designed purely around the tourism industry. To see the real treasures of the country, it is worth making the effort to travel a bit further to some of the other islands and the main population centers. 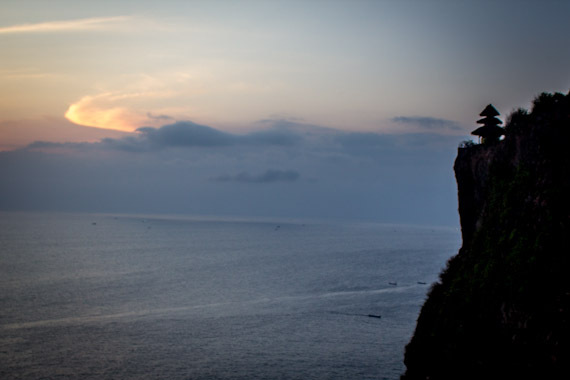 The Indonesian part of Borneo, called Kalimantan, is home to about 50,000 orangutans. They live in the wild, but it's not impossible to see them. The best way to get up close to one of the closest relatives to the human is at a place called Camp Leakey, a research and conservation operation that was set up in the jungle about 40 years ago. To get there, you take a wooden boat (called a 'klotok') up a river for about four hours. Monkeys and birds watch you cautiously from the trees as you glide past them.

The orangutans that come into Camp Leakey during the day come for food. Their natural habitat is being threatened by local farmers cutting down the forests to turn them into agricultural land. The conservationists at the camp only supplement the animals' food when they know it is in short supply elsewhere, but it's not uncommon to see a few orangutans wandering through the camp, acting as if it were their home. 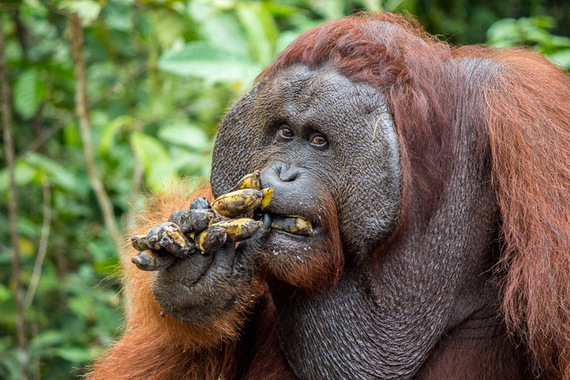 Along with the orangutan, another iconic Indonesian animal is the Komodo dragon. It can only be found on a few small islands in the Komodo National Park in southern Indonesia. The animal's isolation from the rest of the planet is what has ensured its survival for so long - along with not having any natural predators.

You can visit the islands where the Komodo dragons live. A ranger will walk you around so you can see them for yourself. Since they're cold-blooded, they generally just lie still in the sun, but don't be fooled - they are extremely dangerous. The rangers carry a stick to fight them off in case they do decide to make a run at any new pieces of meat walking into their territory! 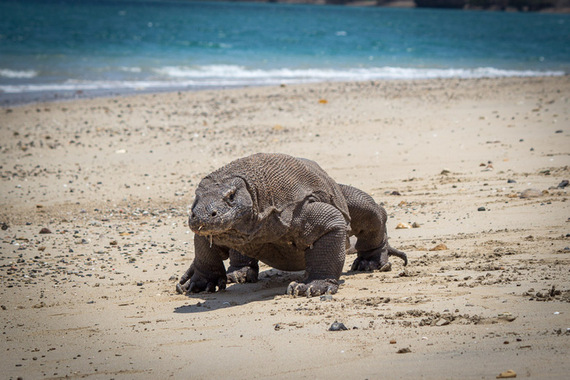 Inside Komodo National Park lies a small island called Kanawa. You won't find any killer reptiles here; it's a little isolated piece of paradise. You can only get to Kanawa Island by boat and, although there are basic bungalows you can stay in overnight, most people come just for the day. Not that many people visit at all - it is well off the tourist trail and takes a little bit of effort to get to.

The beaches are incredibly clean and the water is transparent. The snorkelling just off the coast offers the opportunity to explore of some of the best sea life in the area and you can spot everything from starfish to 'Nemo' clownfish. It's also possible to use the island as a base for diving if you hunger for a little more adventure than just relaxing in the sun and eating lunch on the beach. 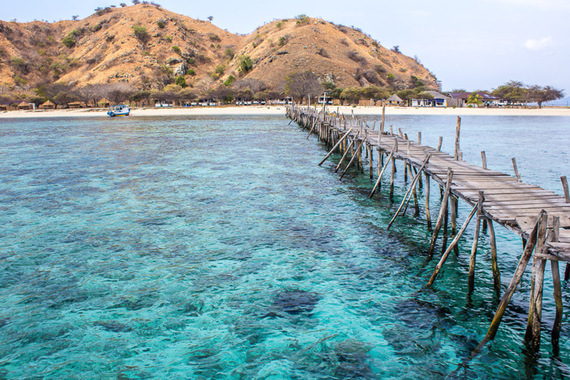 One of the most interesting cities in Indonesia is Yogyakarta, a cultural center of the country. Although it is only the 31st largest city by population, it is considered to be one of the most important. Yogyakarta has a large student population, which brings with it all the art and culture you would expect from Indonesia's emerging generation.

Yogyakarta has also been an important political center over the centuries and the city's main palace is still used as a residence by the sultan. Nevertheless, it is possible for tourists to visit the palace and its wonderful complex full of Indonesian art and architecture. There is also a cultural link between the palace and the people. It was designed to reflect the Javanese cosmos, facing the volcanic Mount Merapi in one direction and the Indian Ocean in the other. 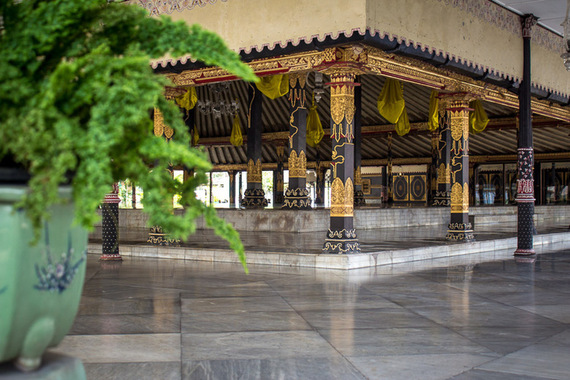 On the outskirts of Yogyakarta you'll find Prambanan, an enormous Hindu temple from the 9th century. The central building is 47 meters high and is one of the largest Hindu temples in Southeast Asia. It's no wonder that it has been named a World Heritage Site by UNESCO. It is worth visiting during the day, but, at night a dramatic performance of the Ramayana Ballet happens right in front of it. It's a mythical tale of demons, heroic animals, and epic royal quests that's told through music and dance. The whole performance, with the backdrop of the temple, feels exotic and, at the same time, intimate. The costumes, the expressions, and the songs draw you right in. 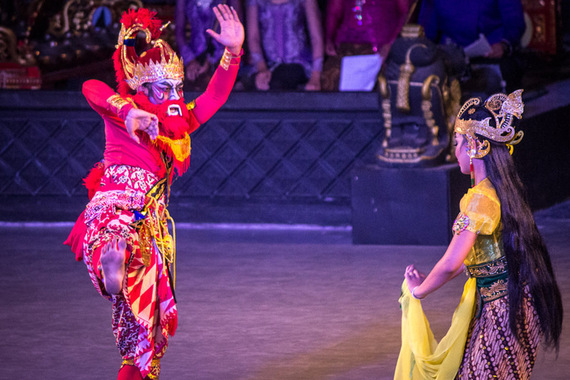 About an hour's drive from Yogyakarta is another large temple - this time a Buddhist one. Borobudur Temple is, in fact, the world's largest Buddhist temple and is also a UNESCO World Heritage Site. It was built in the 8th and 9th centuries but was, at some point, lost to the world and was covered in jungle. It wasn't until 1814 that the British set out to rediscover the temple after hearing stories about it from locals.

You can climb up the steps of the temple to the top, which is covered in small stone stupas with seated Buddhas inside. It can get hot and busy during the day so one of the best ways to see Borobudur for yourself is early in the morning just as the sun is rising. Not only is it less crowded then, but it's amazing to see when the sun's first rays hit it. 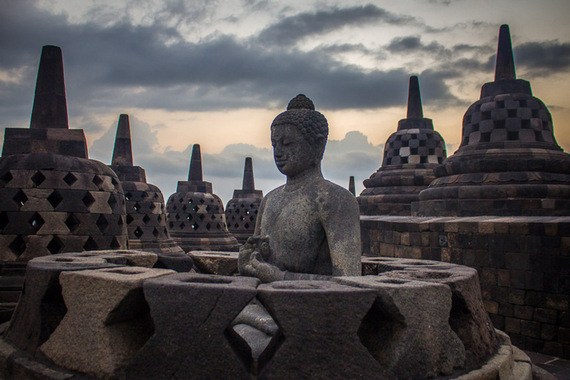 Travelling further east into Java from Yogyakarta eventually brings you to Mount Bromo. It is an active volcano in the middle of a large valley. With its top blown off, it appears more like a crater than a mountain. Putrid sulphurous gas and smoke billow out from within.

The traditional way to see Mount Bromo is to get up early and trek up a nearby mountain for views across the valley as the sun rises. (There are also horses you can ride to the top if you don't feel like walking.)

One of the reasons it has become such a popular site for visitors is that Mount Bromo doesn't exist in isolation. The valley is actually a 'caldera' - an enormous cauldron-like pit created by the ground collapsing after a major eruption. After sunrise, the groups of tourists head down to the caldera and walk across it and then up the volcano itself to look into the center. 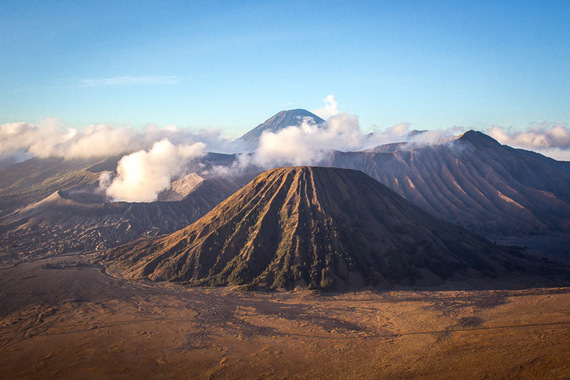 Most visitors to Indonesia bypass the capital Jakarta - and it may seem like there's a good reason for that. At first glance, it is a large congested city that has much more to offer residents than tourists. However, with a population of about ten million people, there are plenty of things to find in Jakarta if you know where to look.

An interesting area to explore is the old Dutch quarter of Kota Tua. When the Dutch colonizers set up their base here, it was just this small area that made up the city. Back then it was called Batavia.

After seeing all the museums in Kota Tua, the most authentic place to have a rest is Cafe Batavia. The building was constructed in 1850 in the colonial style and the interior has been designed with this history in mind. 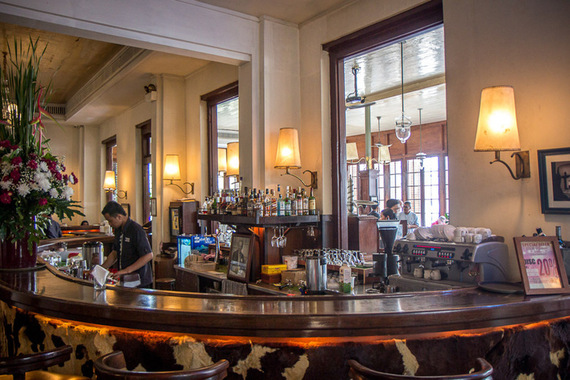 If you're looking for a day trip out of Jakarta, then Gunung Padang offers something rather special. This bizarre archaeological site might contain evidence that would make us rethink our whole history. Some experts think it was built 20,000 years ago - a long time before we thought humans were capable of creating something so advanced.

The site is made up of five terraces on the top of a mountain. Thousands and thousands of rock pieces are strewn across the area and you'll need to use your imagination to visualize the ancient complex it once was.

Gunung Padang is not a popular tourist spot and it's easiest to get here by hiring a car and driver from Jakarta. But it's fascinating to see and learn more about the work going on here to prove (or disprove) when it was made - and by whom! 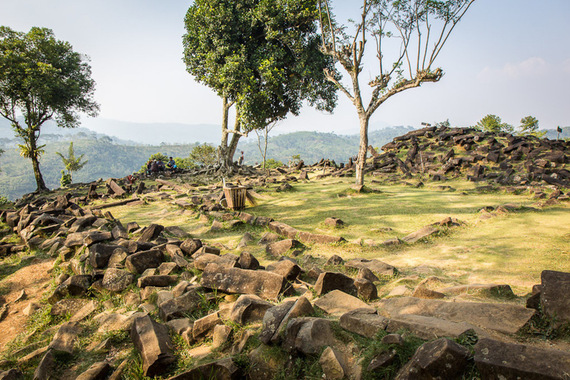