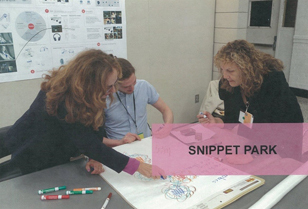 Snippet Park: Remember those words. Thinking differently sure makes the world a more friendly and accessible place. And the experience I felt straight through my core was undeniable while listening to a presentation by a senior inventor to the industrial design students at North Carolina State University with regard to his brilliant, yet simply designed OXO product that highlighted its intuitive attributes of flipping and folding an omelet as easily as if one

had no impacts to movement by virtue of any sort of disability or physical limitation - no matter one's age. Sexy stuff, this talk about all the possibilities and gains made on behalf of our aging population with its [all too often reported issues] of failing eyesight and unfortunate tendency towards memory loss.

The younger-than-springtime-at-heart professionals who were on board with me would certainly have none of those negative preconceptions. This group was raring to make some noise, relax into one's own body, dream bigger, breath, breath, breath, rest when ultimately necessary and resume again, intent to smell even the smallest molecule. In this case, the seniors were going to give the young students a run for their money...and their imagination all in the healthy and spirited pursuit of good humor and play. After all, is anyone (especially, an architect) ever too old (or averse) to play? 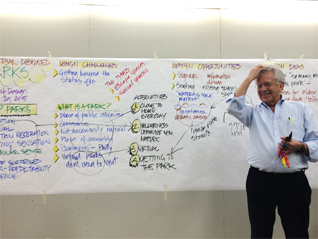 In architecture, design collaborations of this specific nature are called charrettes. And so it was in the utterly enchanted spirit of the Symposium that Snippet Park emerged. Snippet Park. Even the name evokes a woodland unimagined until now. A world unto its own and yet no farther than one's own backyard or neighborhood - or, a place one contemplates in a concrete jungle. Snippet Park: an oasis for young or old where all senses are summoned to life. Imagine which road to take when one is entranced by not just an earthen trail, but by a water trail and a plant trail as well. Each one uniting as a theme unto itself.

When was the last time you recall collaborating with a group of [relative] strangers in a creative exchange that you felt just might change the world? For me, the experience that fits the bill completely occurred during the 2015 Universal Design Symposium held at North Carolina State University, Raleigh in March.

Truth be told, North Carolina State University is the copyright holder of the seven guiding principles of Universal Design, whose goal is to "extend ideals of accessible design to everybody and recognize that

improved participation enhances the value of the built environment". The Standards were developed in part with the Global Universal Design Commission, Inc. (GUDC) and the National Institute on Disability and Rehabilitation Research (NIDRR), through the Rehabilitation Engineering Research Center on Universal Design and the Built Environment (RERCUD). I myself am a member of the GUDC Definitions and Ratings Committees.

Important stuff for certain, but I digress. Each and every participant left me spellbound and breathless with excitement for the range of possibilities that surfaced to explore in my chosen field. And, I am still in contact with those who befriended me - whose creativity moved me profoundly - over the two intensive and illuminating days (and nights) of the Symposium.

Make new friends...perhaps this was on Alice's mind the dreamy afternoon she tumbled down the rabbit hole? Yes, it's a familiar refrain, but in the particular instance in which it came to my mind, I immediately began thinking a zillion light-years beyond the proverbial box.

The plant trail for instance, employs the tactile through Lamb's Ears, smell via herbs and flowers, while hearing is spurred by whispering pines and aspens and taste encouraged by veggies and herbs, the haptic informed by bamboo or weaving stems, and the visual portrayed by a Venus fly-trap. Ah, the stuff of daydreams and nursery rhymes and definitely by the minds, perceptions and manipulations of these professionals tasked with their heady inventions.

While the water trail inspires its own sense of community, as each "sense" has a theme: water as a tactile substance; smell as mist coming off the water; hearing the movement of water - always a soothing presence; taste - while salty is taken for granted, what other options might occur if water appeared as a mist, there for the taking, a tasting experience par none.

And, just where does air make its mark in this Radial City of one's creation: does air become tactile when spun by the wind of a "stepping bellows"? Does the scent derive from bubbles intentionally imbuing the air? Do chimes signify the passage of time through the air? And, as for the visual a whirly-gig seems to fly unimpeded as if it had a mind of its own.

And so as the early spring night wore on and the immersion in this sensory and accessible world we had created grew more outsize, our thoughts became as wild and animated as the characters that came to light during Alice's journey. What a tapestry of delights came to life (at least somewhat short lived). Like the flurry of friends she made that day. And so, like Alice, did I.

Becoming airborne, heading home, my mind, miles away in Snippet Park, is suddenly cued to appreciate each observation as if never seen before. Cumulus clouds taking on a different dimension and a sense of wonder seizes me.

Or, maybe, like Alice, seeing the world differently becomes as natural as breathing. Every improbable and ageless vista an opportunity to travel through the looking glass. And, make new friends.