For years I always prided myself on not wearing a lot of makeup, or not feeling the need to brush my hair before I went to the grocery store. The persona of the "cool , lo maintenance girl" was one I emulated perfectly, or at least I thought. I scoffed at the idea of fake nails, implants, botox, anything that wasn't naturally mine. However all good things must come to an end, and I'm kinda like it. Now the only time I'll be seen "makeup-less" is when I'm covered by huge sunglasses and a baseball cap.

I have definitely been feeling prettty damn good lately, pretty much.... HOT as fire. Hey I'll own it, as all women should.

Well if you remember a few months ago I talked about fine hair problems.
I mentioned the treatment, called PRP, where they stuck 100's of little needles in my head, how I would sob because my hair was falling out and I felt totally opposite of feminine.

I mentioned maybe getting extensions this summer due to all the fun stuff I had coming up. I bit the bullet and I booked an appointment at the best extension salon in the city, for literally the day after I returned. The funny thing was that I didn't want to tell anyone, not because I wanted to trick people into thinking these new locks were all mine... but because paying roughly $1000 for fake hair seems insane!

I'm a pretty lo maintenance girl, so this kinda seemed off character for me and ya I was a bit embarrassed/ worried my mom would think I could start affording my own gas.

Not sure if it was stress related, health, or just genetics but I have developed alopecia in one spot that I am just praying to the Lord Almighty IS NOT permanent. I was so embarrassed about having to wear hair extensions, but now I rock them with confidence and 100% stand behind anyone who feels the need to make some personal enhancements. 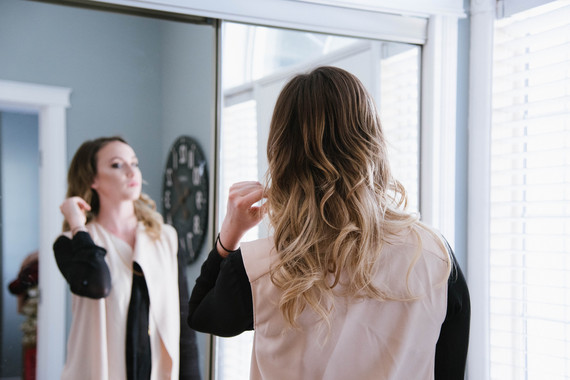 There is nothing wrong with enhancing yourself in order to go out with confidence, and we need to stop shaming people for doing so. Everyone has their own insecurities, so why not give each other a break. I remember how shocked I was to find out that my ex-boyfriend had veneers, I had NO idea, it was something I thought only grandparents who lost their teeth wore. Nope, he was 22 when he got them and they increased his confidence immensely. One of my best friends got her first pair of breast implants at 18, after being a size AA her whole life and hating it. Guess what, she's never looked back and loves herself more than ever. Now my mother is considering going under the knife, and my first reaction was a big "WTF"! Then I had to remind myself that here we have a woman, in desperate need of a confidence boost. Who am I to shame her away from going out and doing something that very well may make her walk with a little more pep in her step.

Say what you will about these types of enhancements, or actually DON'T, leave people alone. There is nothing wrong with investing in something that means a lot to you.
Nothing wrong with putting on a full face of makeup to go to the grocery store, wearing heels to a University class, you do you and everyone else needs to STFU. Mic Drop.