Occasionally I pick up my well-thumbed copy of To Kill A Mockingbird when I feel out of sync with the world around me...it's a wonderful grounding tool for me. 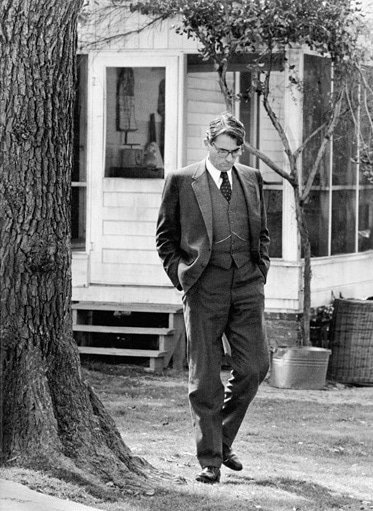 It's sort of strange, but it is like a lot of Bible verses that we all know very well...we hear, we listen, we form an opinion and then one day without warning everything in our lives change...some small trials, others enormous, and we start listening to the old familiar with new ears and suddenly find an entirely new meaning.

Like here. Scout is talking to Atticus about a situation in the book. Quoting,

"Well, most folks seem to think they're right and you're wrong...."

"They're certainly entitled to think that, and they're entitled to full respect for their opinions," said Atticus, "but before I can live with other folks I've got to live with myself. The one thing that doesn't abide by majority rule is a person's conscience."

Reading that I was suddenly transported to a place a few months ago. I was listening to a discussion of things that I thought were very unjust, but thought that arguing with the people would be akin to teaching a pig to sing....you won't be able to do it, and in the process you are bound to annoy the pig...so I remained silent, neither agreeing or disagreeing...and when I read the quote above, I realized that by not speaking what I felt the truths to be I was tacitly giving lip service, tacitly keeping the peace....but tacitly agreeing. And it was wrong.

Suddenly I felt like a coward...just because a lot of people think something doesn't make it right...in fact, a look back through recent history tells us that often it is wrong, such as when we interned Americans....Americans, in camps...American citizens who had everything they owned taken away from them, simply because they happened to have ancestors who were from Japan. Most Americans kept quiet about it...no matter how they felt. And it was wrong.

I felt like a total wimp, like so many must have felt when Senator Joseph McCarthy of Wisconsin conducted witch hunts in the 1950s...going after those of certain beliefs, certain ways they were born, putting them on blacklists that destroyed their lives...because he did not personally agree with it. Most Americans were afraid to speak, afraid that if they spoke against it, they would end up on a list. And a list was to be feared. And it was wrong.

I am ashamed to say that I might have been one of those people...because standing up for what is right and speaking your mind is scary! Someone might think you were actually different...and that is one thing that we all have trouble with...we want to fit in, want to be accepted, but then come the wee small hours of the morning when you wake up, tossing and turning, thinking about what you really should have said, and why didn't you?

It's because the one thing that doesn't abide by majority rule majority rule is my conscience, your conscience, our collective consciences...and if we don't occasionally step out of our comfort zones and speak what we believe, then we will wake up, night after night, in those wee small hours and feel those intense pangs of guilt. And it is wrong.

Now I am not proposing that everyone say every single thing that flashes into their brain before they think...you have to have filters, but you can make your point without ridiculing or insulting someone else...and if they turn on you, insulting you, they are nothing more than the silly bullies many of us had to endure growing up...blowhards, that when really confronted by facts, brains and thought, have nowhere else to go. And if you don't you are wrong.

I have an interesting meal on my plate...I need to eat it one bite at a time as I chew on this thoughtfully, deliberately, but also with kindness...the other person is speaking what they believe is well, and it must be respected...but not necessarily tolerated.

"They're certainly entitled to think that, and they're entitled to full respect for their opinions," said Atticus, "but before I can live with other folks I've got to live with myself. The one thing that doesn't abide by majority rule is a person's conscience."

I have to live with myself. If you have found yourself in similar situations, I have an invitation.

Join me. There is plenty on my plate to share.