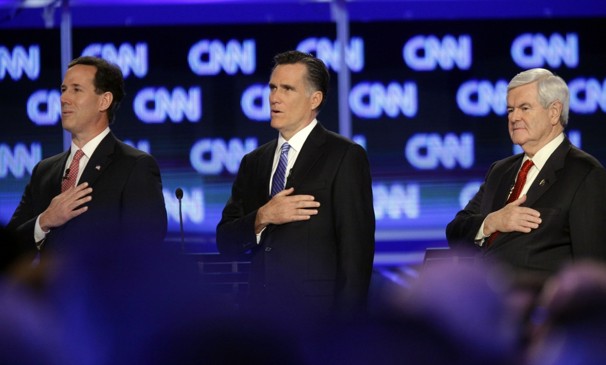 I watched the two Republican presidential candidate debates in South Carolina last week, and although the contenders spent quite a bit of time bickering over economic issues (as well as bashing each other), they ignored the elephant in the room. The biggest long-term threat to the U.S. economy isn't government over-regulation, high taxes, or even the deficit. It's climate change.

I work for a nonpartisan, tax-exempt organization that can't endorse candidates. We do, however, educate the public and promote government policies based on science. So I can't get into the Republican or Democratic presidential candidates' positions on climate, which you can easily find with a quick Internet search. But I can tell you how battered their respective states' economies will be if we don't dramatically reduce carbon emissions, and do it soon.

The snapshot projections below are what scientists expect the climate in each state to look like over the next three decades and beyond under a business-as-usual scenario where we continue to burn fossil fuels and destroy tropical forests at today's rates. It's not a pretty picture. In general, Americans should expect more smog, more heat, more droughts, and more flooding.

Georgia: First, let's look at the home of former House Speaker Newt Gingrich. Georgia's largest industry is agriculture, which contributes more than $68 billion annually to the state economy. It's the nation's number one producer of broiler chickens, peanuts, pecans and watermelons, and among the top producers of blueberries, cabbage, cantaloupes, cotton, eggs, onions, peaches, tomatoes and tobacco. Unchecked climate change likely would saddle those farmers with more droughts.

In 2007, a major drought across most of the Southeast caused $1.3 billion in economic damage in Georgia, including losses of $63.1 million in corn, $160.1 million in cotton, $83.8 million in hay, and $92.5 million in peanuts. A 2008 report by the National Conference of State Legislatures (NCSL) and the Center for Integrative Environmental Research at the University of Maryland calculated that an additional 5 percent in crop losses due to climate change would mean nearly $110 million in direct and indirect economic losses in Georgia annually.

Rising sea levels and more intense hurricanes, meanwhile, would threaten Georgia's coastline. According to the NCSL report, the cumulative cost to replenish sand to protect the state's coastline from a 20-inch rise in sea level could reach $154 million to $1.3 billion by 2100. Georgia generally does not suffer as much damage from hurricanes as its neighboring states Florida and South Carolina, but in 2004, Hurricane Ivan caused nearly $70 million in property damage in the Peach State.

Illinois: You might remember that Barack Obama's Chicago suffered through a horrific heat wave in July 1995 that led to more than 700 heat-related deaths over a five-day stretch. By 2050, under the business-as-usual scenario, Chicago would experience a heat wave as hot as that one every summer, according to "Confronting Climate Change in the U.S. Midwest," a 2009 report by the Union of Concerned Scientists (UCS). Peoria, Rockford, Springfield and other Illinois cities would face similar conditions. Such searing heat, combined with higher smog and soot levels, would aggravate asthma and other respiratory problems and cause more premature deaths across the state. 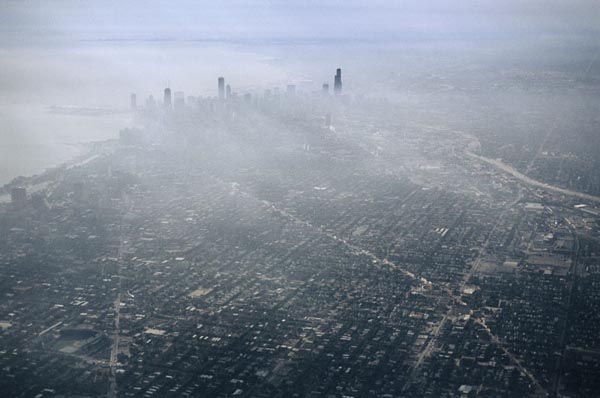 Scientists project that Illinois likely would experience an increase of at least 20 percent in heavy precipitation over the next 30 years, mainly in the winter, spring and fall, which could mean more flooding. That, coupled with more frequent short-term summer droughts, heat stress, and wider insect ranges, would spell trouble for the state's $11 billion-a-year agricultural sector. Corn yields, for example, could decline as much as 50 percent by the middle of the century. Meanwhile, hog and pig producers already are losing $20.5 million a year due to heat stress, and nearly permanent summer heat stress would threaten dairy cows, hogs, pigs and other livestock toward the end of the century.

Massachusetts: Mitt Romney was governor of a state that today is experiencing earlier springs, hotter summers, and milder winters than it did in 1970--all consistent with climate change. Under the business-as-usual scenario, it would get worse. According to UCS's 2007 report, "Confronting Climate Change in the U.S. Northeast," over the next 30 years, the state's largest cities, including Boston, Springfield and Worcester, likely would experience nearly 20 summer days with temperatures higher than 90º F. That could worsen the state's smog problem and accelerate pollen production, which could lengthen the allergy season.

Massachusetts is home to one of the country's biggest commercial fishing industries. Based on current emissions trends, scientists project that ocean temperatures will be too warm by the end of this century to support the historically important Atlantic cod. Lobsters in coastal waters south of Cape Cod, meanwhile, would be cooked by mid-century. The state also produces a quarter of the nation's cranberries. Heat stress would significantly depress yields for them and other fruit and vegetable crops, which currently generate about $94 million annually, by mid-century.

Rising sea level not only would increase the frequency and severity of storm surges and coastal flooding, it is expected to overwhelm some low-lying coastal areas and dramatically accelerate erosion. Sea-level rise also would threaten salt marshes and estuaries, which provide nursery habitat for commercial fish and feeding grounds for migrating birds.

Finally, by mid-century, warmer winters would drive many ski resorts out of business, and by late-century, the trees that provide the state's spectacular fall foliage displays--maple, beech and birch--would disappear.

Pennsylvania: Rick Santorum, a former senator and representative, hails from Pennsylvania. The top agricultural industry in the Keystone State is dairy farming, and major cash crops include corn, vegetables, mushrooms and fruit, especially grapes and apples. Over the coming decades, Pennsylvanians likely would have to deal with longer, more intense summer heat waves; reduced winter snowpack; and declining farm yields, according to a 2008 UCS study, "Climate Change Impacts and Solutions for Pennsylvania."

Most state residents would have to suffer through twice as many summer days over 90º F than they did before 1990. That would degrade air quality, exacerbating allergies, asthma and other respiratory illnesses; stress dairy cows, limiting milk production; and reduce yields of Concord grapes, sweet corn and apples. Prized hardwood trees, including black cherry, sugar maple and American beech, would decline precipitously.

Winters, on the other hand, would be milder. The areas in the state that typically experienced 30 days or more of snow before 1990 likely would only see only about two weeks of the white stuff. That would mean significantly fewer ski resorts and very little, if any, snowmobiling.

Texas: Texas Gov. Rick Perry dropped out of the race a few days after the first South Carolina debate, but Ron Paul, the U.S. representative from the state's 14th district--just south of Houston on the Gulf coast--is still in contention. Given the state's size, not all counties would be affected in quite the same way over the next few decades, but significant areas already are experiencing extreme heat, drought and wildfires.

Last summer, for example, some counties endured more than a month of consecutive 100º F-plus days, and much of the state is still suffering from a devastating year-long drought that is expected to stretch through at least next summer. The state also is beset by a range of extreme weather, including tornadoes, hail, thunderstorms, damaging winds and hurricanes, but not all are associated with climate change. That said, unchecked climate change is bound to make the withering heat, extended drought and deadly wildfires in the Lone Star State routine.

Texas is suffering from a year-long drought that completely dried up O.C. Fisher Lake in San Angelo. Droughts like this current one, which is expected to last through next summer, likely will become routine in the Lone Star State. (Photo: AP)

That isn't good news for the state's $20 billion agricultural sector. Texas boasts the most farms in number and acreage in the country. It produces the most cattle and is a leading state for sheep and goat production. It also is the top state for cotton, its leading crop and second-most-valuable farm product, and is a major producer of cantaloupes, cereal grains, grapefruits and watermelons.

The current drought has hit them all, triggering $5.3 billion in losses last year, according to the Texas AgriLife Extension Service at Texas A&M University. Including the drought's ripple effect on fertilizer dealers, processing plants, grocery stores and other related businesses, the estimated loss balloons to $8.7 billion.

It's climate change, stupid: Not to let the Republican presidential hopefuls off the hook, but one reason they have largely ignored global warming is because journalists haven't pressed them on it, especially during the televised debates. I can't say that I have watched all 23 of the debates that have occurred so far. But I have seen a number of them, and I have read the coverage. As far as I can tell, other than a brief mention about climate science during a debate in early September, moderators have abdicated their responsibility to address one of the most critical issues of our time.

Of course, for most Americans today, the biggest issue is the economy. It reminds me of the 1992 campaign, when then-Arkansas Gov. Bill Clinton challenged President George H.W. Bush. To keep the Clinton campaign focused, lead strategist James Carville hung a sign in Clinton's Little Rock headquarters that said, in part: "The economy, stupid." Although the sign was only meant for internal consumption, "It's the economy, stupid" became the de facto slogan of the Clinton campaign.

The difference today is we know a lot more about the threat of global warming than we did two decades ago. We know that, next to a nuclear war, it poses the most significant long-term threat to not only our economy, but to the future of the planet. So it would be fitting to update that 20-year old sign to read "Climate change, stupid" and hang it on the stage during not only the presidential candidate debates, but during the debates for all candidates running for office this year.

Elliott Negin is the director of news and commentary at the Union of Concerned Scientists in Washington, D.C.