Social Media week is winding down, but there's a campaign that's only beginning to pick up steam. With nearly 9,000 Facebook 'Likes' since its launch on Feb. 7, the campaign "It's Colombia, NOT Columbia" has become the voice of millions around the world who have spent decades correcting people who misspell the South American country. HuffPost spoke with Carlos Pardo, Vice President of Operations for Zemoga, the Bogotá-based digital agency behind the campaign, to discuss their inspiration and goals moving forward.

What motivated you start the social media campaign “It’s Colombia, NOT Columbia”?

The story starts when Zemoga and Compass Porter Novelli, a public relations firm, partnered to launch Social Media Week Bogotá. Last September, we invited the founder of Social Media Week on the international level (Toby Daniels) to give a conference at Social Media Week Bogotá and he had the chance to see the event first hand. He was impressed and invited us to give a conference at Social Media Week New York this year. Our goal was to talk about social media in Colombia. Our thesis is essentially that social networks are the best platform for spreading a message and the new image of Colombia. So we decided to create the campaign “It’s Colombia NOT Columbia” to prove it. There are a lot of people in the world who have an outdated impression of Colombia. We are a lot more than coffee, Colombia is a lot more than Pablo Escobar.

The image that people had of the country was mostly because of what was seen in traditional media and in Hollywood. We don’t want to deny Colombia’s reality or its past but we do want to concentrate on the good things. We think that social networks today have what traditional media had in the past to communicate these messages to people.

The march (A Million Voices Against The FARC) on February 4, 2008 was a demonstration of how someone with access to a computer or phone can reach millions of people and literally mobilize an entire country for a cause. This march was created by a college student who had an idea and was successful in spreading it to millions of Colombians who took to the streets in peaceful protest to say we are a united voice. That was our first confirmation that social media is a platform that can move masses with little investment.

How does the campaign work on these social networks?

We want everyone to feel free to use the campaign’s slogan “It’s Colombia, NOT Columbia” in any way they deem creatively appropriate. There’s been people that have written it on their hand and have posted pictures others have had their own t-shirts made or some have written it in the snow or sand in different places in the world. It’s Colombia speaking to the world, raising its voice to say “We want to show you all the good our country has to offer and we want to start by having you say our name correctly. (Check out some submissions above)

Obviously Columbia and Colombia are completely different things, but why does the misspelling bother Colombians so much?

More than it being a bother, it’s the fact that a name is a very important part of someone’s identity. If my name is Carlos and they call me something different repeatedly, I’m going to feel bad. We just want people to call us by our name, but the issue goes beyond the name, we want people to be interested in the positive things that are happening here.

With over 7,000 fans in less than a month (launched on February 7) what has been the most surprising aspect of people’s reactions?

The most surprising part is the organic expansion that it has had, because we haven’t promoted the campaign in the media or on TV. People identify with the message, it’s like “Hey I’ve always wanted to say it, to manifest that It’s Colombia NOT Columbia” and now they found a group of people that have done it.

There are some people who’d say that Colombia may not be the paradise that the campaign paints it out to be. For example, despite the current peace talks, violence still exists by the FARC and ELN rebel groups. So what exactly are the changes that you want the world to see in Colombia?

We want people to understand that Colombia is much more than what they see in the media. We want to balance out the message and tell the positive side. Today Colombia has a solid economy and investors are looking towards Latin America, especially Colombia because during the current global financial crisis Colombia has shown sustainable growth rates. I think Zemoga is an example of these changes, people think Colombia is a coffee exporter and it is but it also exports digital services to clients like Toyota, Nissan, BMW, Sea World.

[When Colombia is spelled with a U] people generally take it as disrespectful, personally I don’t think of it as a sign of disrespect but as a lack of knowledge. In 1988, for example, TIME magazine came out with an article headlined “Colombia The Most Dangerous City In The World” and they were referring to Medellín the city. It’s like they had so little interest in even saying the name correctly that they confused a city with a country. Ironically in 2012 Medellín was nominated as one of the three most innovative cities in the world along with New York and Tel Aviv. This is the type of drastic change that Colombia has seen. Medellín went from being a blacklisted city, with one of the highest indexes of crime in the world, to being one of the world’s most innovative cities.

So what is the campaign’s ultimate goal?

At Zemoga we want to continue using this new technology. Our objective is to show as a company that you can change the image of a country, or improve the image, through social media. And what’s happening to Colombia is not just happening here. There are many countries whose image abroad is incorrect or outdated so we want to set that example to say “Take these social networks and use them as peaceful weapons” with which we can change the world. That’s what we’re really looking for.

CORRECTION: A previous version of this article incorrectly stated Colombia is the largest supplier of cocaine in the world. As of last year, Peru and Bolivia have both surpassed Colombia in cocaine production.

It's Colombia, NOT Columbia: Changing The Image Of A Country Through Social Media
#ItsColombiaNOTColumbia 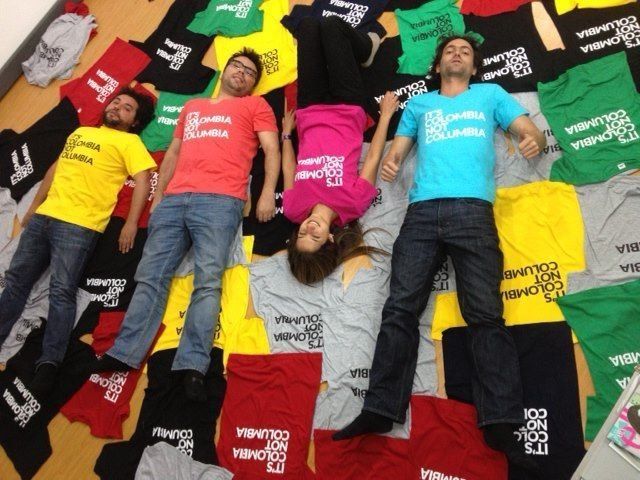