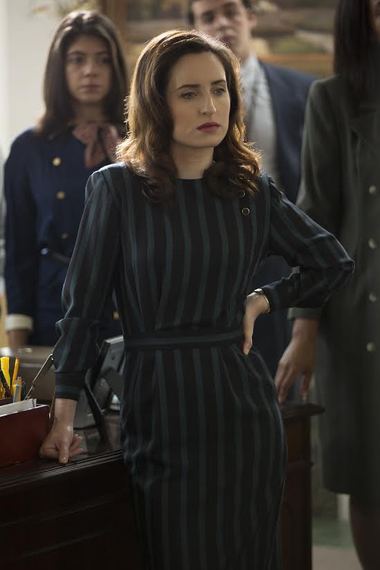 With a juicy dramatic role in HBO's smash success Confirmation and weekly chance to show off her hilarious comedic chops on CBS's Life In Pieces, it quickly becomes quite clear that Zoe Lister-Jones is in high demand. And how could she not be? Capable of doing it all, Lister-Jones doesn't just perform, but she's also a wordsmith. That's right- she writes too! Having co-written two projects already that have attracted such talents as Debra Winger and Anthony Edwards, Lister-Jones shows that her star is clearly on the rise in every direction and is in no way showing any sign of falling.
For Confirmation, the actress takes on the famous Clarence Thomas/Anita Hill case, portraying a character caught in the crossfire of internal feminism and what she felt to be her civic duty- and Lister-Jones never misses a beat. Then, for Life In Pieces, she stretches completely different muscles and transforms into almost an entirely new actress as she delivers a dry, witty performance that keeps audiences laughing. As for her own writing? The actress turned writer strongly believed in creating powerful content that she would want to see, particularly strong roles for female protagonists, so she decided to take matters into her own hands and help make that happen.
She talks about her ever-evolving resume here, what it's like working with her talented Life In Pieces cast, and being an actress and a writer in Hollywood;

Let's talk a little bit about Confirmation and anyone who might not know the Clarence Thomas/Anita hill story.
So, Clarence Thomas was a Supreme Court Justice nominee and Anita Hill came forward with allegations of sexual harassment, which became this huge news story. It actually kind of became the beginning of the 24 hour news cycle in this country. And eventually, Clarence Thomas was nominated to the Supreme Court, and to this day he still sits on it as a justice, but to me Anita Hill is really one of our great unsung heroes because she was the first woman who really brought sexual harassment into a public discourse and it was incredibly brave for her to do so. She was very scrutinized by the media and the senate committee, but it really shifted how women in the workplace are treated in this country and I hope that the release of Confirmation continues to have that effect, because it's unfortunately still an issue we continue to see.

Most actors in Confirmation are playing the on screen equivalent to their character right down to their name. You play Carolyn hart, who is based on Harriet Grant- talk about her and why the character was changed.
Well, I think that my character became more of an amalgamation of a number of characters, so Susannah Grant decided to change the name to be more fictionalized so that we weren't held so responsible to be factually representing a real person. But, I think my character really represents a lot of women that were behinds the scenes around this explosive time that digs into gender politics in this country and kind of the different ways women attack and internalize that. My character was deeply conflicted about the job she had to do versus her own personal relationship to the subject matter.

What was it like working on the film and preparing to play a part of a real situation?
We all read so many books on the subject and dug as deep as we could on that time period in our history. I think Susannah Grant, our writer, did an incredible job of getting behind the scenes and the nitty-gritty of these hearings, so a lot of our job was done for us. I relied a lot on reading material and past news sources.

Let's talk about Life In Pieces- it has such a fun concept!
Life In Pieces is a comedy that is told in four short stories every week. It's a really fun and take that I don't think we've ever really seen before on network television and it makes it super exciting to work on as an actor, not just because our cast is so unbelievable, but because your storyline and arcs are so condensed due to the structure of the show. I will go on a shoot with Colin Hanks, who plays my onscreen husband, and it will take two or three days and it will almost feel like a play. A lot of TV shows constantly stop and start all the time, but with this show you're in this whirlwind in telling this story and it gives it this sense of comedy and urgency that's great. And as a family, both on and off-screen, we are all so in love with each other.

It does have a great cast- There is Colin Hanks, as you mentioned, James Brolin, Dianne Wiest, and the really funny Angelique Cabral, among others. Talk about working with this great cast.
Dianne Wiest has been an icon for me for as long as I can remember, growing up and watching her in Woody Allen films. I still pinch myself every day that I get to spend so much time with her and work with her, it's a dream. Colin Hanks is the best scene partner I could ever ask for and has become a very dear friend- we've all become very dear friends. Angelique Cabral is also now one of my closest friends. And I think that lends itself to the intimacy we are playing on screen. We genuinely really do have so much fun together when the cameras aren't rolling and it bleeds into idea that this family is really lived in on screen.

You are also a writer, as well as an actress. You co-wrote and starred in both Consumed and Lola Versus. Talk about these projects a bit, and making your own content as a women in entertainment.
I think that for any artist, especially for those of us in front of the camera, it can be frustrating to be at the whim of someone else. It's a huge honor to be a part of someone else's creation, that's a huge part of what makes being a performer so exciting, but it also gives you a supreme lack of control over when and where you will be doing that. So, for me, I started writing my own material- really when I started acting about a decade ago. I find it very fulfilling to be able to create roles for female protagonists that are three dimensional and can be unapologetic. And to tell stories that feel true to my female experience, which might not be the same for everyone else, but it is one voice among many.

Which do you prefer- acting or writing?
I love both of them equally. They flex very different muscles and when I get to see them together it's the most beautiful intersection. Writing is a way to access deeper parts of your imagination, and with acting, you really get to just play. So, when the two things come together and you can perform your own work? It's pretty magical.

What do you have next on the horizon that fans can look out for?
Season two of Life In Pieces starts this Fall, and I am working on a new film that I can't announce just yet- but stay tuned, I'm really excited about it!

And anytime Lister-Jones gets in front of, or behind the camera, we can't help but get excited also! And we're certainly excited for the magic of the intersection of both!
Life In Pieces returns this Fall on CBS.