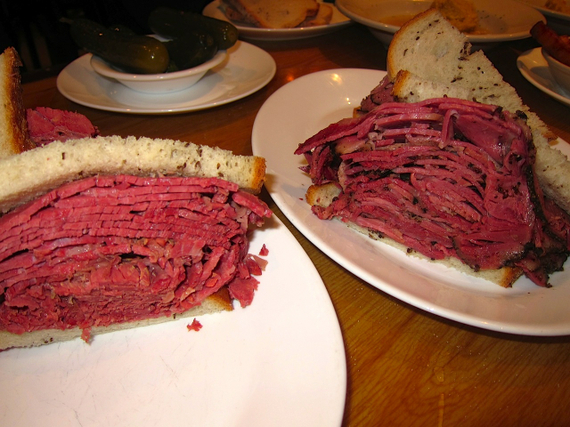 Corned beef on the left, pastrami on the right at Carnegie Deli in New York City

Sure, St. Patty's Day is right around the corner. Funny, isn't it, how the meat case at your supermarket fills up with corned beef at this time of year?

Similarly, most of "corned beef history" is rather confusing.

To further the confusion: there is no one "corned beef." There are many corned beefs from many places. (The name itself probably comes from England, where they used "corns," or little pieces, of salt, to cure the meat.)

I'm high on corned beef right now, in the middle of March, and will diligently continue my research. But let's start today with arguably the most famous "style" of corned beef in America... the one emanating from Jewish delis in New York. (It doesn't hurt that Irish immigrants and Jewish immigrants had a commingling of corned beef fortunes in the 19th century).

Fact #1 of corned beef in Jewish delis is this: Too many people outside of New York forget that ordering cured meat in a Jewish deli is always a dichotomous, Talmudic moment of self-exploration. It's not all about the corned beef!

Aha! THAT is the question! I have friends who MUST come to a Jewish deli on their visits to New York... but it is always pastrami they order! 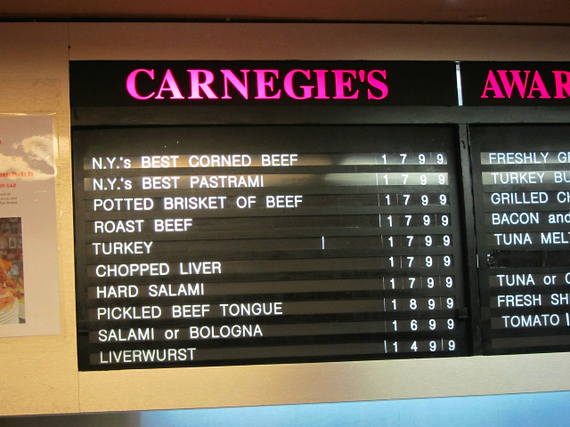 The behind-the-counter menu at Carnegie Deli

Let's consider first their similarities. Jewish-deli corned beef, as the name says, is beef, usually brisket. Pastrami, which has strong Romanian ties, was often made there with goose; Romanians in New York, again in that all-important late 19th century, found beef brisket to be cheaper, so that became their pastrami base. Matching the base of deli corned beef.

Of course, in the Jewish delis, beef was an excellent choice from the kosher point of view; in Europe, however, there is such a thing as pork pastrami. Just not in Jewish communities.

In fact, both corned beef and pastrami have always seemed to me a clever way for kosher eaters to have "their own" pork; neither one, not corned beef nor pastrami, both pink and fatty, seems much like beef. "Pork" comes much more readily to mind when you consume corned beef or pastrami!

Next: both meats are cured, which usually means soaked in brine for a while, with some degree of "pickling spices."

Also in that brine is what's called "Prague powder" -- an unsavory (to some) mixture of chemicals that turns the beef pinkish-red (or "porky!")

Now we hit some of the differences.

Corned beef is simply transferred from the brine, to a cauldron of boiling water, and boiled or steamed until it's tender.

Pastrami is dried a bit, then sprinkled with a black rub that usually includes black peppercorns, coriander, paprika, garlic, mustard seed, cloves and allspice. This black coating is THE red-flag tip-off that what you have is pastrami; corned beef has no coating at all. 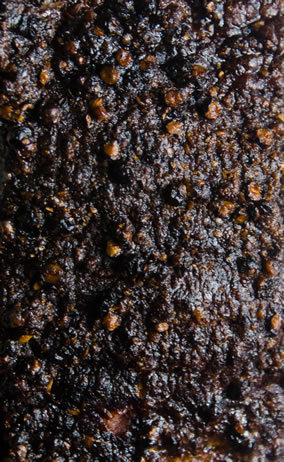 The tell-tale black coating of pastrami

The cured-meat sophisticates can also tell that pastrami has gotten a light smoke, whereas corned beef hasn't.

So what are the taste differences? And which one is better?

Basically, corned beef (when handled properly) can seem a little lighter, a little wetter. It is also purer: the taste of beef does not compete with the taste of spices. 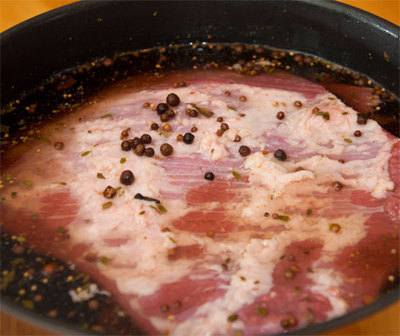 The purity of corned beef

"Pastrami people" are usually looking for something a little extra -- namely, smoke or spices.

To this people, they are both wonderful, and everything has to do with how you're feeling that day. For me, on some days I like to eat a frankfurter boiled, right out of the water, no bun needed. On other days, I like my hot dog grilled, placed on a bun, slathered with a bunch of sweet-and-sour condiments. It's exactly the same difference in the corned beef vs. pastrami consideration.

I'm just sayin'... we shouldn't leave pastrami out of the deliberation so often. Did you know that a sandwich called "The Rachel" is growing in popularity... it's a Reuben made with pastrami instead of corned beef?

As St. Patty approacheth, and especially since it's a bunch of blarney that corned beef and cabbage is Irish -- why not pick up a hunk of the spiced stuff from your local deli, and steam it to a turn for your March 17 dish of "Pastrami and Cabbage???"