Someone dies from gun violence every 16 minutes in America.
YOU CAN DO SOMETHING ABOUT IT is a series of frank interviews with passionate men and women who are leaders, activists and influencers on the subject of gun violence in America. Some have been my teachers, champions and support system on this very complicated and emotional journey and some I have admired from afar for their bravery, audacity and indomitable commitment to the cause. Although our backgrounds, experiences and the challenges we face in our work are as complex as the causes and the solutions to this epidemic, all have shown that there is more that can be done to end this senseless loss of human life.
I am proud to introduce you to each of them and excited to share their insights into how all of us can be a part of the solution to Raise The Caliber of our communities. 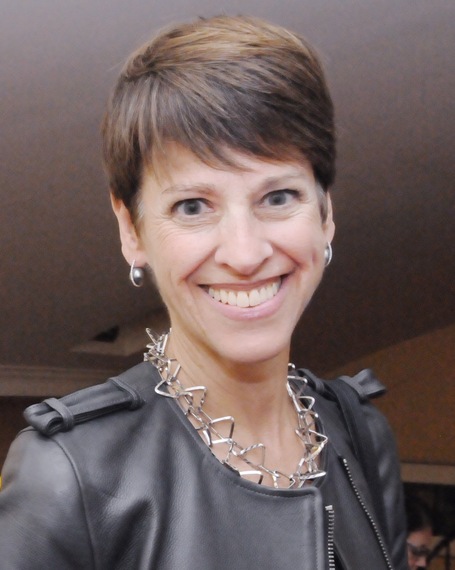 Occupation: I am a mother of 2 teenagers plus one 17 year old Argentinian exchange student. I am also an advocate for Connecticut Against Gun Violence http://www.cagv.org/ and have served for several years as Co-Chair of the annual fundraising event which raises the majority of the funds the organization needs to lobby for strong gun laws in our state.

Where you live: Connecticut

What quote do you live by: "Nothing great was ever achieved without enthusiasm" Ralph Waldo Emerson

What are you most proud of about your work/life?
I am privileged enough to be able to not work for a living so I am able to devote my time to raising our two children, mentoring a Fresh Air Fund child, and acting as a role model for our children as an advocate for things in which I strongly believe - like safer and saner gun laws.

What is the biggest challenge you face in your work?
My biggest challenge is trying to motivate other women lucky enough to be in my same position to care about the issue of gun safety and to feel as though their actions can make a difference. It's difficult to keep the momentum going begun by the tragic shooting at Sandy Hook elementary school.

Why do you think we have such a problem with gun violence in America?
The main reason we have such a gun problem in America is the ease with which people can buy guns. There are just too many in circulation, and no liability on the part of the owner if a crime is committed with the gun. I want the purchaser of a gun to be so scared about the liability incurred when a purchase is made that he/she thinks long and hard about making the purchase to begin with.

Do you think there a law that the government could enact that would really make a difference in reducing gun violence and building safe communities?
I think there are many gun laws that could make all of us safer, but realistically, I think we should just try to close the loophole in the existing background check law. Checking the background of buyers in stores is obviously important, but all the other points of purchase need background checks as well. All of those people who claim background checks don't work must not have read that 2.6 million gun sales have been blocked in the 20 years since the Brady law went into effect.

What are three things the average American citizen can do to "Raise The Caliber" of their community?
1. I wish I could persuade all my friends to help us counteract the NRA by making phone calls, sending emails, writing letters and sending them snail mail and showing up at our local state capitals and in DC when any gun safety legislation is under discussion.
2. We need to be there in numbers. Every single time there is a piece of legislation proposed to strengthen our gun laws, the NRA gets its members out there doing all those things. The noise they make drowns us out. I don't believe it's representative of the sentiments on this issue by the majority of Americans.
3. You can talk about it until your your friends are sick of hearing about it. Wear them out. Be a broken record. Turn every conversation about anything to the topic of guns. Make them want to head in the other direction when they see you coming. This is slightly tongue in cheek, but bottom line- keep the topic in front of everyone.

Is there a must read book or article on this topic that has educated and inspired you?
I would ask people to read Dan Brown's Gun Guys, A Road Trip (to get the self-described gun fanatic's point of view and Don't Shoot. One Man, A Street Fellowship, and The End of Violence in Inner-City America by David M. Kennedy (to better understand inner-city violence, and the role guns play, and show a possible solution).

About the Editor: Jessica Mindich began the Caliber Collection in January 2012 as a collaboration with the Mayor of Newark, NJ, Cory Booker, as a way to turn illegal and unwanted guns from our cities' streets into jewelry. Their vision was to create a virtuous cycle by funding gun buyback and amnesty programs from the proceeds of the sales from the Caliber Collection. The jewelry is made with the serial numbers from illegal guns and the metal from shell casings. The Caliber Collection donates 20% of the net proceeds to fund voluntary gun buyback and amnesty programs in some of the toughest cities in America. To date, they have taken over 1,000 illegal guns off the streets and have raised approximately $100,000 for police departments in Newark, Hartford, the San Francisco Bay Area and Detroit from the sale of Caliber products to customers in over 85 countries.
From the success of the Caliber Collection, Jessica created The Caliber Foundation, which offers support to victims, families and communities who have been affected by illegal gun violence. The Caliber Foundation is the proud recipient of grants from MTV, Shepard Fairey/Obey Giant and The Serena Williams Foundation. Jessica is also the founder of the Raise The Caliber initiative, a National advocacy campaign to end illegal gun violence. Proceeds from partnerships under Raise The Caliber are donated to the Caliber Foundation.
www.calibercollection.com