When introduced to speak on the road during our America's Original Sin book tour as an "evangelical" Christian, the large, racially diverse, and intergenerational audiences who have been smiling with great enthusiasm look very perplexed and ask, "What?"

"Let me explain," I find myself saying in the face of the fact that Donald Trump has now captured the votes of more "evangelicals" in the Republican primaries than any other candidate.

So I have to define the word evangelical. I find it's best to use the words of Jesus himself, words white evangelicals need to listen to if they are, as they claim, believers in Jesus.

Jesus announced his mission in the little town of Nazareth, as recorded in Luke chapter 4, verse 18.

"The Spirit of the Lord is upon me,because he has anointed meto bring good news to the poor.He has sent me to proclaim release to the captivesand recovery of sight to the blind,to let the oppressed go free."

Does that sound like anything you have heard from the "evangelicals" the media is covering in this election?

When Jesus chose this text from Isaiah 61 to read in the temple, he was proclaiming his mission, as recorded in the Luke 4 text. These were the first public words out of his mouth, his first sermon, his first public appearance, his opening gig, and his mission statement. I've always called it his "Nazareth manifesto." Very clearly, justice would be at the center of his mission. He came to "bring good news to the poor." The root of the Greek verb Jesus uses there for "good news" is evangel, from which we get the words "evangelize" and "evangelical." Jesus' movement was to be based on proclaiming the good news. Without a doubt, Jesus' gospel was always to be good news for the poor. Therefore, any of our gospels that are not good news to poor and vulnerable people clearly fall short of what Jesus proclaimed in his opening statement about why he came. In other words, any gospel that is not good news to the poor is simply not the gospel of Jesus Christ. 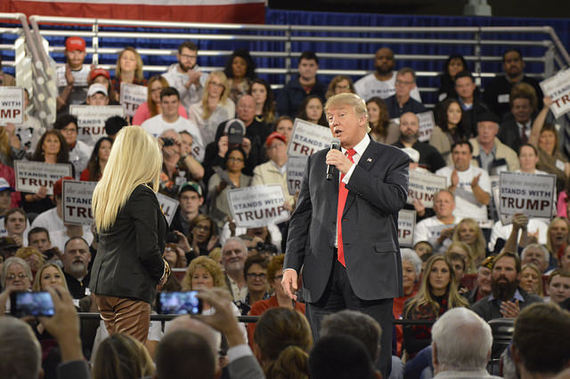 In this week's Nevada Republican caucus, Donald Trump received more evangelical votes than any other candidate (40 percent over his nearest competitor, Ted Cruz, at 26 percent), as Trump also has done in South Carolina and New Hampshire. In Iowa, he ran behind only Ted Cruz, a candidate with similar views regarding the poor, vulnerable, immigrants, walls, etc. In other words, the mission statement of Jesus in Luke 4 has almost nothing to do with the voting practices of white evangelicals in this election year. Or we might say that white nativism has trumped the faith of the evangelicals -- or at least what Jesus meant by "evangelical."

Donald Trump is clearly appealing to racial politics in this election. He is the white candidate, the white nationalist champion, the leader who promises to block, obstruct, deny, or at least delay the more racially diverse America that is emerging. It is time to admit that the word "white" is wiping out the word "evangelical."

Data from a number of sources (Public Policy Polling, YouGov, and MSNBC among others) show the extent to which Trump has tapped into a set of deeply rooted racial attitudes. Here is the factual data about who his supporters are and what they say they believe. They are 91 percent white, 58 percent male, 43 percent with a high school degree or less, 50 percent between 45 and 64 years old and only 2 percent under 30, with most making under $100,000 and describing themselves as "conservative" or "very conservative."

And then there are the troubling statistics: 82 percent support Trump's proposed ban on Muslims entering the country, compared to 54 percent of all Republicans who feel this way. Sixty-six percent of Trump's supporters believe President Obama is a Muslim, and 61 percent think he was not born in the U.S. Of course these statistics aren't terribly surprising given the fact that Trump, the "birther," has long led a racially motivated campaign questioning the citizenship of the first black president. All the "outsider" analysis of Trump's success that fails to use the word race misses this core of his campaign.

In fact, a brand new poll of South Carolina Republican primary voters confirms that, at least in South Carolina, Trump supporters are, "more intolerant of race and religious differences than average Republicans." Thirty-one percent support a ban on homosexuals entering the U.S., 62 percent support a national Muslim database, 40 percent support shutting down all mosques in the U.S., 33 percent believe Islam should be illegal in the U.S., 70 percent believe the Confederate flag should still be flying over the State Capitol, and 38 percent wish the South had won the Civil War (another 38 percent said they weren't sure, and only 24 percent were glad the North won).

The PPP poll also asked voters if they thought whites were a superior race, as the New York Times reports:

"Most Republican primary voters in South Carolina -- 78 percent -- disagreed with this idea (10 percent agreed and 11 percent weren't sure). But among Mr. Trump's supporters, only 69 percent disagreed ... Nationally, the YouGov data show a similar trend: Nearly 20 percent of Mr. Trump's voters disagreed with the freeing of slaves in Southern states after the Civil War. Only 5 percent of Mr. Rubio's voters share this view."

White evangelicals should have to explain, on the basis of their biblical faith, how they find themselves among these statistics, how they can feel comfortable with Trump's proposed policies of rounding up, deporting, and destroying the families of 11 million immigrants; killing the families of terrorists; restricting the religious liberty of Muslim citizens; banning Muslim refugees; and appealing to the worst and most dangerous instincts of white Americans.

It's time to put "evangelical" ahead of "white" and to revisit Galatians 3:28, "There is no Jew or Gentile, slave or free, male or female; for we are all one in Christ Jesus."

Jim Wallis is president of Sojourners. His book, America's Original Sin: Racism, White Privilege, and the Bridge to a New America, is available now.