Six years ago, we wrote The Broken Branch, which sharply criticized the Congress for failing to live up to its responsibilities as the first branch of government. Based on four decades of watching Congress, ours was a sympathetic perspective, one that reflected our appreciation of the inherent messiness of the legislative process within the constitutional system. Reconciling diverse interests and beliefs in America's extended republic necessarily involves adversarial debates and difficult negotiations.

But there was no denying the impact of broad changes in America's wider political environment -- most importantly the ideological polarization of the political parties -- on how Congress went about its work. We documented the demise of regular order, as Congress bent rules to marginalize committees and deny the minority party in the House opportunities to offer amendments on the floor; the decline of genuine deliberation in the lawmaking process on such important matters as budgets and decisions to go to war; the manifestations of extreme partisanship; the culture of corruption; the loss of institutional patriotism among members; and the weakening of the checks-and-balances system.

While we observed some improvement after the Democrats regained control of Congress in the 2006 midterm elections, the most problematic features of the system remained. We thought them unlikely to abate absent a major national crisis that inspired the American public to demand that the warring parties work together. America got the crisis -- the most serious economic downturn since the Great Depression -- and a pretty clear signal from the voters, who elected Barack Obama by a comfortable margin and gave the Democrats substantial gains in the House and Senate.

What the country didn't get was any semblance of a well-functioning democracy. President Obama's post-partisan pitch fell flat, and the Tea Party movement pulled the GOP further to its ideological pole. Republicans greeted the new president with a unified strategy of opposing, obstructing, discrediting, and nullifying every one of his important initiatives. Obama reaped an impressive legislative harvest in his first two years but without any Republican engagement or support and with no apparent appreciation from the public. The anemic economic recovery and the pain of joblessness and underwater home mortgages led not to any signal that the representatives ought to pull together, but rather to yet another call by voters to "throw the bums out."

The Democrats' devastating setback in the 2010 midterm elections, in which they lost six Senate seats and sixty-three in the House, produced a Republican majority in the House dominated by right-wing insurgents determined to radically reduce the size and role of government. What followed was an appalling spectacle of hostage taking -- most importantly, the debt ceiling crisis--that threatened a government shutdown and public default, led to a downgrading of the country's credit, and blocked constructive action to nurture an economic recovery or deal with looming problems of deficits and debt.

In October 2011, Congress garnered its lowest approval rating (9 percent) in polling history. Public trust in the government's capacity to solve the serious problems facing the country also hit record lows. Almost all Americans felt their country was on the wrong track and were pessimistic about the future. The public viewed both parties negatively, and President Obama's job approval rating was mired in the forties. The widespread consensus was that politics and governance were utterly dysfunctional. In spite of the perilous state of the global economy--and with it the threat of another financial crisis and recession -- no one expected the president and Congress to accomplish anything of consequence before the 2012 election.1

Paradoxically, the public's undifferentiated disgust with Congress, Washington, and "the government" in general is part of the problem, not the basis of a solution. In never-ending efforts to defeat incumbent officeholders in hard times, the public is perpetuating the source of its discontent, electing a new group of people who are even less inclined to or capable of crafting compromise or solutions to pressing problems. We have been struck by the failure of the media, including editors, reporters, and many "expert" commentators, to capture the real drivers of these disturbing developments, and the futility of efforts by many nonpartisan and bipartisan groups to counter, much less overcome, them. We write this book to try to clarify the source of dysfunctional politics and what it will take to change it. The stakes involved in choosing who will lead us in the White House, the Congress, and the Supreme Court in the years ahead are unusually high, given both the gravity of the problems and the sharper polarization of the parties.

We have identified two overriding sources of dysfunction. The first is the serious mismatch between the political parties, which have become as vehemently adversarial as parliamentary parties, and a governing system that, unlike a parliamentary democracy, makes it extremely difficult for majorities to act. Parliamentary-style parties in a separation-of-powers government are a formula for willful obstruction and policy irresolution. Sixty years ago, Austin Ranney, an eminent political scientist, wrote a prophetic dissent to a famous report by an American Political Science Association committee entitled "Toward a More Responsible Two-Party System."2 The report, by prominent political scientists frustrated with the role of conservative Southern Democrats in blocking civil rights and other social policy, issued a clarion call for more ideologically coherent, internally unified, and adversarial parties in the fashion of a Westminster-style parliamentary democracy like Britain or Canada. Ranney powerfully argued that such parties would be a disaster within the American constitutional system, given our separation of powers, separately elected institutions, and constraints on majority rule that favor cross-party coalitions and compromise. Time has proven Ranney dead right -- we now have the kinds of parties the report desired, and it is disastrous.

The second is the fact that, however awkward it may be for the traditional press and nonpartisan analysts to acknowledge, one of the two major parties, the Republican Party, has become an insurgent outlier -- ideologically extreme; contemptuous of the inherited social and economic policy regime; scornful of compromise; unpersuaded by conventional understanding of facts, evidence, and science; and dismissive of the legitimacy of its political opposition. When one party moves this far from the center of American politics, it is extremely difficult to enact policies responsive to the country's most pressing challenges.

Recognizing these two realities and understanding how America got here is key to taking the right steps to overcome dysfunctional politics. 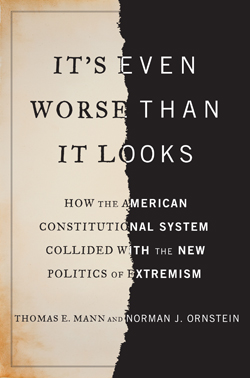 This post is excerpted with permission from It's Even Worse Than It Looks: How the American Constitutional System Collided With the New Politics of Extremism, by Thomas E. Mann and Norman J. Ornstein. Available from Basic Books, a member of The Perseus Books Group. Copyright © 2012.