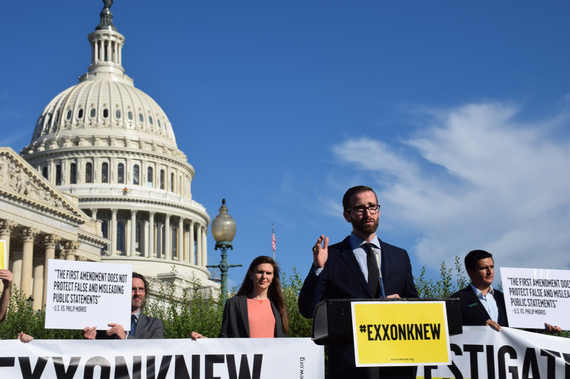 
As the campaign to hold ExxonMobil accountable for hiding what they knew about climate change gains momentum, Exxon's defenders have fallen back on a bizarre strategy to try and protect the company: claiming that environmental groups and attorneys general are colluding to "silence" scientists and "chill" scientific inquiry.

"These investigations have had a chilling effect," said Texas Republican Representative Lamar Smith, the Chair of the House Science Committee, who hosted a hearing on the Exxon issue this afternoon in Washington. Other Republicans on the committee echoed him. "If government was put in charge of science, we'd still think the Earth was flat," said one member. "Scientists are being bullied," thundered another.

This Republican committee's eagerness to defend science was rather ironic considering the committee's own track record. The committee is perhaps best known not for its support for science (Republicans consistently vote to defund federal science agencies), but for subpoenaing the National Oceanic and Atmospheric Administration for, wait for it, conducting climate science. "The hypocrisy from the majority members defending scientific freedom given their previous actions towards NOAA+Tom Karl is breathtaking," tweeted Gavin Schmidt, himself a scientist and director of the NASA Goddard Space Institute at Columbia Institute.

The only science that took place at the committee hearing this afternoon came courtesy of Democratic Representative Bill Foster, the only Member of Congress with a PhD in science, who lamented Chairman Smith's abuse of his position to subpoena various officials and organizations. "At some point I'd like to return to science on this committee," said Foster. He then proceeded to grill one of the Republican's "expert" witnesses, Professor Ronald Rotunda, about some outlandish statements Rotunda had made about how the melting of the entire Greenland ice sheet wouldn't cause sea levels to rise. "This hearing is an example of just another rearguard action by a group of people who deny climate change," concluded Foster, shaking his head.

The claim that the groups behind the #ExxonKnew campaign are silencing or chilling scientific inquiry is especially strange because of our shared focus on, well, science. 350.org is named after the safe level of carbon dioxide in the atmosphere, 350 parts per million -- that's about as scientifically wonky as it gets. The Union of Concerned Scientists (UCS), another group supposedly having a chilling effect, is, as the name suggests, largely made of scientists. UCS released a letter earlier this week with over 2,000 scientists weighing in on their behalf to say it was the committee, not environmental groups, that was chilling scientific inquiry. Greenpeace, another subpoenaed group, is best known for its bold campaigns and actions, but it too has a deep track record of supporting scientific inquiry, often transporting scientists up to the Arctic or other remote areas to conduct research. 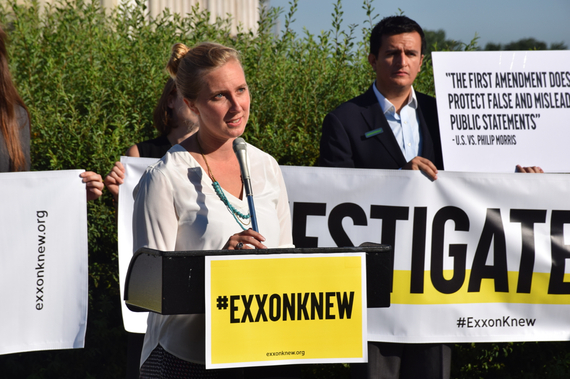 Our complaint with Exxon has never had anything to do with the science they did or are doing. In fact, we'd like to see them do more climate science. Environmentalists have long urged the fossil fuel industry to do a more thorough study of the impact of their business on the planet. We fully support any scientific research into climate change, renewable energy, or zero carbon fuels. Many have made this case to Exxon directly. At the company's annual shareholder meeting this year, advocates continued to lobby for the company to do a full climate assessment of its business and appoint a climate expert to its board. Exxon shot down both proposals. We also applaud the scientists at ExxonMobil, who as early as the 1970s discovered that their product causes global warming.

Our problem isn't with the science, our problem is with the coverup. When Exxon executives heard from their scientists about climate change, instead of warning the public, or urging Congress to fund more research into solutions to the crisis, Exxon spent millions on a vast misinformation campaign. They donated millions more to climate denying politicians, including many of the Republicans at the commitee hearing today (Rep. Smith, the Chairman, has received over $24,000 from Exxon over his career, for example). Instead of supporting science, Exxon funded front groups who published false studies about global warming, lambasted scientists on television, and went after the reputations and careers of individual scientists. Watch the documentary Merchants of Doubt and you'll see PR hacks like Marc Morano, a former Republican politico aid, laugh gleefully about his own personal track record of intimidating scientists. As he says in the preview below, "I'm not a scientist...but I play one on TV occasionally. Ok, hell, more than occasionally."

If Representative Smith is so worried about the chilling of scientific inquiry in this country, he should be subpoenaing the executives over at ExxonMobil to see what role they had in their company's own scientific coverup. He could even go a step further and subpoena the records of his own committee--we'd like to know, for example, what conversations his staff have had with Exxon or any industry front groups. As Senator Sheldon Whitehouse said at a press conference before the hearing this afternoon, the public deserves to know "how far the hand of the fossil fuel industry is into the glove of this committee." 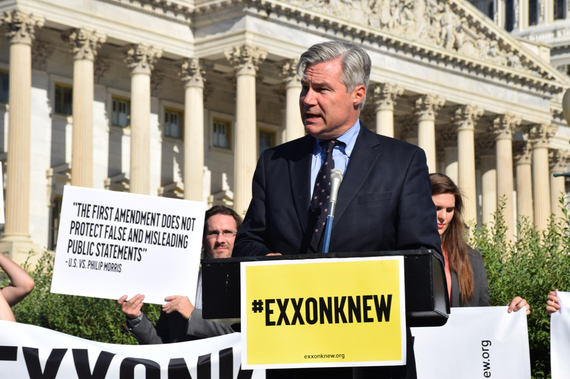 Today's hearing was designed to distract the public from the real issue at hand: whether Exxon lied about their knowledge that their product caused climate change. Instead, it just reaffirmed why this case is so important. As 350.org's Executive Director May Boeve said at this morning's press conference, "This hearing is Exhibit A in the case study of Big Oil's stranglehold on Congress."

Our hope is that the ExxonKnew campaign can play some role in breaking that stranglehold, because if we don't, Congress and its committees will continue to be run by politicians who deny the basic facts of climate change, let alone are supporting scientific research to help solve it. Now that is a chilling thought.