I'll have more to say about this broader theme in coming days, but I've been talking to tons of people from all walks of life in recent weeks about the fiscal cliff and, more generally, the stuff the federal government is doing for better or worse. And while this is a "convenience sample" and not a scientific poll, the strong consensus I've found is that regardless of their political stripes, there is virtually no recognition of a lot of positive stuff that's actually occurred (and by "positive," I mean stuff they like -- not necessary stuff that I like).

For this post, I'll focus on the safety net, but many of the people I talked to want the government to spend less. Putting aside the whole austerity-in-recession problem, when you point out to them that, in fact, we have very significantly cut spending -- $1.7 trillion over ten years (including interest savings) -- they refuse to believe it.

When you tell them that health care costs are actually growing more slowly in recent years, and that this may be an early sign that cost controls of the type in the Affordable Care Act will actually work, they are incredulous (though at this point, to be fair, it's hard to separate out recessionary effects).

The fact that the President's budget -- which is basically what he's working from on the cliff negotiations -- will stabilize the debt as a share of GDP, as scored by the CBO, is simply unacceptable to people.

As is the fact that the safety net worked. The figure below is an update of one I've used before showing the trend in poverty rates as officially measured and as correctly measured. The Census Bureau has an alternative series of poverty measures that captures the economic impact of the benefits that flow to the poor. So, for example, it includes the cash value of food stamps and the impact of tax credits like the Earned Income Credit. It also adjusts for geographical price differences and out-of-pocket health care spending.

While official poverty rates -- which exclude much of the value of the safety net -- increased from 12.5 percent to 15 percent, 2007-11, the alternative measure, though higher at a point in time (accurately measured, there are more poor people than the official measure reveals), was essentially unchanged. That's right -- the deepest recession since the Great Depression and poverty didn't go up, at least not when you measure it correctly.

That is a real accomplishment and a sign of a far more civilized society here in the good, old USA then you might get from watching reality TV. And before you get all wound up about the government bestowing gifts on the lazy, remember -- this occurred during a massive market failure when work disappeared, particularly for folk in disadvantaged settings. As the economy comes back, the extent of assistance from many of these programs will also fade (e.g., food stamps).

I'm not saying we don't have work to do when it comes to a functional, efficient government sector... there's a whole lot to improve. But folks really need to look at these issues with open eyes, minds, and non-jerking knees. You might be pleasantly surprised. 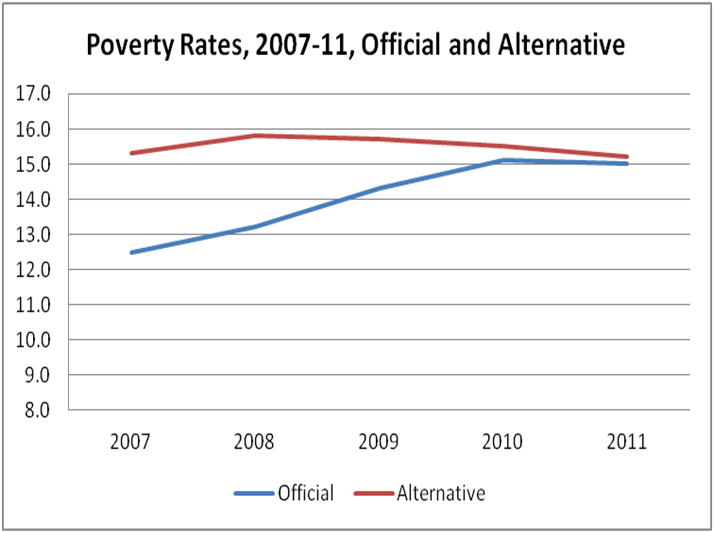 Source: Census Bureau (note: I used definition MSI-GA-CE as I believe it is closest to the National Academy's recommendations.)